I’ve been asked a couple of times recently about Matthew’s rather startling and perplexing version of the parable of wedding feast (Matt. 22:1-14). Don Lambirth, for example, sent me this question:

In your opinion who are the people who are invited but don’t come? Who are those who are invited later and do come? And this is the one that always puzzles me… who is the guy who shows up not dressed properly? And why is he kicked out? What if he was poor and couldn’t afford a wedding garment? Would Jesus and Paul have presented this story differently? And what I mean is did Jesus speak of the outsiders as the dregs in Jewish society whereas Paul may have flipped it into a story of the outsiders being Gentiles?

Matthew has this as one of three parables told to the chief priests and elders of the people in the temple: they are like the son who said he would work but did not; they are like the tenants in the vineyard who produce no fruit but kill the servants sent to them and even the owner’s son; they are like guests invited to the wedding of the king’s son who can’t be bothered to attend. Luke has Jesus tell the story in the house of a Pharisee, over dinner, in response to the man who exclaimed, “Blessed is everyone who will eat bread in the kingdom of God!” (Lk. 14:15-24). The note of judgment is muted in Luke’s version.

Some of those invited have better things to do—one goes to his farm, another to his business. But others, like the wicked tenants in the vineyard, seize the servants, treat them shamefully, and kill them. In anger the king “sent his troops and destroyed those murderers and burned their city”. He then sends out his servants to bring in whomever they can find in the streets, “both good and bad”, so that the wedding hall is filled with guests.

When the king arrives, he sees that one of the guests does not have a wedding garment. When challenged, the man is speechless. The king instructs his attendants: “Bind him hand and foot and cast him into the outer darkness. In that place there will be weeping and gnashing of teeth”. Jesus concludes the parable: “For many are called, but few are chosen.” 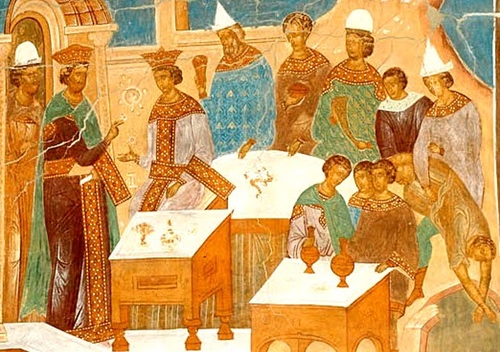 The parable underlines the fact that from Jesus’ point of view the kingdom of God is not a universal, post-Jewish phenomenon. The kingdom of God has to do with judgment on unrighteous Israel, culminating in the destruction of Jerusalem, and with the surprising inclusion, instead, of the “lost”—the sinners, “the tax collectors and the prostitutes”, who believed John and repented (Matt. 21:32). As in the parable of the tenants the servants are the prophets sent to Israel, who have been shamefully treated and killed (cf. Matt. 5:12; Lk. 6:23; 11:49). The Gentiles are minimally implicated. There seems to me to be little point in trying to make the story work outside this historical context.

There is no reference in the parable to the Gentiles. Those who are belatedly included are in the place of the son who first refuses to do the will of his father but then changes his mind. I think it’s unlikely that Luke was thinking of the Gentiles when he had the servants go first into the streets and lanes of the city to bring in “the poor and crippled and blind and lame”, and then outside the city into the “highways and hedges” to bring in all and sundry (Lk. 14:21-23). The point is that those furthest from the political centre of the nation are included. Paul, I suppose, might have used the story differently.

The servants bring in “both the bad and the good”. It is sometimes suggested that this makes the same point as two other parables: the weeds sown among the wheat—the sons of the evil one co-existing with the sons of the kingdom until the close of the age; and the net which brings in fish of every kind so that at the close of the age angels must separate out the evil from the righteous (Matt. 13:24-30, 36-43, 47-50).1 Possibly, but the parable already has a judgment at the eschatological climax, when the disobliging invitees are destroyed and the riffraff are brought in to the celebrate the wedding. Moreover, there is no subsequent separation of the good and the bad other than the expulsion of the one person who had turned up without a wedding garment. More likely, then, the point is that not everyone who has responded to Jesus was formerly a tax collector, prostitute or “sinner”.

This may be compared to a king who summoned his servants to a banquet without appointing a time. The wise ones adorned themselves and sat at the door of the palace, for they said, “Is anything lacking in a royal palace?” The fools went about their work, saying, “Can there be a banquet without preparations?” Suddenly the king desired his servants. The wise entered adorned, while the fools entered soiled. The king rejoiced at the wise but was angry with the fools. “Those who adorned themselves for the banquet,” he ordered, “let them sit, eat and drink. But those who did not adorn themselves for the banquet, let them stand and watch.” (b. Shabbat 153b)2

In Jesus’ closing saying the many who are called are those brought in after the first guests refuse to come. The the word “few” is ‘very probably also to be understood as a Semitism meaning “fewer than” in the sense of “not all”’.3 The “chosen” are those who will have to serve Jesus effectively in the coming decades, proclaiming the good news of the kingdom of God first to Israel and then to the nations (cf. Matt. 24:22, 24, 31).