Matthew: Thank you Aaron.  Your post…
Aaron Milavec: Let’s assume, for a moment,…
Aaron Milavec: When you ask, “Is this the…
Andrew: Good reading list, by the…
Kevin Holtsberry: Thanks, Andrew. That helps…
END_OF_DOCUMENT_TOKEN_TO_BE_REPLACED

Multifaith Matters Podcast: my conversation with the missiologist Michael Cooper about the narrative-historical method (0 comments)
What is the essence of Christianity? (6 comments)
How does the New Testament predict the future? (0 comments)
Who will be taken? Who will be left behind? Darn it, we’re all too late anyway! (2 comments)
END_OF_DOCUMENT_TOKEN_TO_BE_REPLACED

Samuel Adams’ summary of Wright's argument about history and theology

In The Reality of God and Historical Method: Apocalyptic Theology in Conversation with N.T. Wright Samuel V. Adams offers an inversion of Wright’s solution to the division between theology and history. Whereas Wright addresses the question of God from the side of history, Adams wants to consider how the matter would look if we began not with historical method but with the reality of God. “Can what theologians say about God make sense of both the historical question and theological question and articulate them in such a way that does justice to both?” (17). He will argue for an apocalyptic theology that can be traced from the Reformation, through Kierkegaard and Barth, to Torrance and Martyn.

Wright’s project, according to Adams, “aims at restoring the relationship between Christian theology and methodologically rigorous historical scholarship” (20). The premise is established roughly thus: Christian faith is committed to the historical reality of its seminal events; the description of these events should be informed and corrected by a “proper historical method”; modern critical historiography has appeared detrimental to faith but is a necessary development if the first point is to be taken seriously. The Enlightenment’s historical project was no less skewed by its ideological over-commitments than the faith-based paradigms that it sought to overthrow, but the church has to come to terms with the historical method:

The historian stands as an important point of contact between the past events that make up the source of Christianity’s confessions and the theologian’s efforts to articulate the significance of those events for contexts that present themselves ever anew. (21)

The chapter then does two things. It sketches the historical narrative that accounts for Wright’s “programmatic retrieval of the discipline of history for theology and biblical studies”; and it gives an overview of his critical-realistic epistemology and the questions that it raises “for a continued program of reconciliation between history and theology”.

The chart is basically a mapping of the historical narrative with a couple of additions, which is what we are interested in here. Click on the image to see a more legible version. 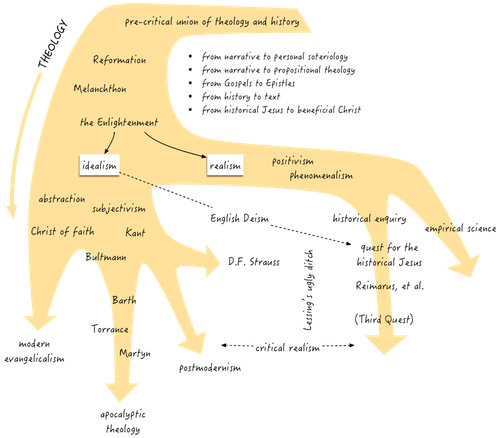 The Reformation shift from narrative to theology

The story begins with the Reformation, which sponsored a significant shift away from the intuitive union of theology and history that had characterised the pre-critical period.

The shift consisted in the reorganisation of doctrine around personal soteriology—the benefits of Christ for the individual (pro me). This led to an abandonment of narrative contexts for teaching and the introduction of “more propositional formulations that could be articulated in a variety of confessions with certainty and clarity” (23). The Epistles then naturally took precedence over the Gospels; and the Bible as text became more important than the historical events which it reported.

In Wright’s view, the rupture between theology and history entailed in this development is encapsulated in Melanchthon’s dictum: “to know Christ is to know his benefits”. The Reformers broke from the medieval church by prioritising personal faith over institutional authority, but this came at the cost of a “similar break with the history of Jesus, the first-century Jew” (25). The Jesus of history was “transposed into the abstract, conceptual Christ”.

The Enlightenment split between idealism and realism

The Enlightenment subsequently elevated reason over traditional sources of authority such as the church or scripture. Initially this meant “objective scientific investigation” or “materialistic empiricism”—the rational examination of the physical world to see how it worked and what could be done with it. Kant, however, drew attention to the problem of the knowing subject. As Adams explains later, “Kant was trying to make sense of the way we experience the world, not by looking at the nature of the world, but first by looking at the nature of the subject and what the subject brought tot he world” (71).

This resulted in a split between two broad epistemological approaches, between two ways of knowing the world. The realist approach put objective reality at the centre and assumed a direct and unambiguous correspondence “between what one observed and what a thing is in itself” (26). The idealist approach put the knowing subject at the centre, maintaining that “knowledge” was—to whatever degree—a construct of the mind and therefore an unreliable representation of external reality. The postmodern focus on the reader’s experience of the text is a continuation of this trajectory (32-33).

In Wright’s analysis—or at least, in Adams’ account of Wright’s analysis—the two paths are subdivided further. Positivism names an optimistic epistemological realism: it “assumes the ability to make claims about reality external to the observer based solely on sense data” (36); whereas phenomenalism constitutes a pessimistic epistemology—the failure of the knowing subject to know anything but itself.

Idealism, likewise, branches between conceptual abstraction and subjectivism. Post-Reformation theology, running down to modern evangelical theology (my addition), is an example of thought abstracted from “concrete history”. Subjectivism “holds that the only knowledge we have of objects is of their appearances, as they appear to the observer, and not as they are in and of themselves” (39).

This fundamental epistemological division forced a corresponding split in Christian theology. On one side, it would follow the road of “rigorous historical enquiry” to the various quests for the historical Jesus. Influenced by the anti-supernaturalism of English Deism, Reimarus set out, according to Wright, to “destroy Christianity… at its root, by showing that it rested on historical distortion or fantasy”.

On the other side, the idealist approach would “pick up Christian doctrines and take them away from their historical rootedness and along multiple paths that would include subject-oriented idealism, existentialism and speculative, progressive Hegelian systems” 27). D.F. Strauss exemplifies the Hegelian approach; Bultmann is heir to a Kantian subjectivism “according to modified Heideggerian categories”—for what it’s worth.

The benefit for theology was that “an abstract Christ could now be associated with the universal truths of reason”, while the increasingly insecure historical foundation could be dismissed as irrelevant. It didn’t matter that Reimarus and others, in their different ways, were taking a wrecking ball to the historical Jesus, because the Christ of faith remained beyond their reach on the other side of Lessing’s “broad ugly ditch”.

The pressure to choose between a faith-less history and a history-less faith has been extremely damaging for the church. Wright’s argument, however, is that the historical-critical method has at last—ironically—created the opportunity to correct the Reformers’ turn to an “abstract conceptual Christ”:

Historical investigation, it turns out, is not only essential for retaining the historical basis of the Christian faith, but good historical method—serious history—is in fact less damning of a historically grounded Christian faith than Reimarus, Lessing, Strauss and others thought. The realist path, the path that chased down the empirical but contingent truths of history, led ever futher into a discovery of a past that affirmed the Christian faith even without the help of the ecclesial authorities who had always predetermined what one would find at its end. (29)

Critical realism and beyond

Wright’s critical realism is designed to overcome the gulf between idealism and realism by affirming both the reality of things and the provisional, progressive and contextualised nature of knowing. It brings theology and history on to the same epistemological ground. The question that Adams will then take up is this: “What bearing does the reality of God have on the critical realist project?” (64). Basically, he doesn’t think Wright takes God seriously enough, epistemologically speaking.

To be continued? I appreciate your chart summarising your summary of Adams’ summary of Wright’s historical and theological method. The summary reminds me of “The Sir Toby Chronicles” — “A Final Twitch of the Thread”, Chapter 2, which would probably be somewhere down the postmodern bifurcation of the subjectivist trajectory.

I enjoyed the chart as well. Good visual summary.
The most urgent challenge for theology, it seems to me, is to introduce and fairly consider science, not just history (which is itself a formidable challenge of course).

What is the essence of Christianity?
How does the New Testament predict the future?
Who will be taken? Who will be left behind? Darn it, we’re all too late anyway!
Resurrection in the Old Testament: literal or metaphorical?
END_OF_DOCUMENT_TOKEN_TO_BE_REPLACED