Helge Seekamp: Dear Andrew, This short…
davo: When the ordinary Jewish…
Mark Newton : What I don’t understand is…
Kevin Holtsberry: Very helpful summary. I…
Andrew: Thanks, for this, Richard…
END_OF_DOCUMENT_TOKEN_TO_BE_REPLACED

In the form of a God: The Pre-existence of the Exalted Christ in Paul: what the book is about and why (2 comments)
Notes on J. Richard Middleton’s The Liberating Image: The Imago Dei in Genesis 1 (0 comments)
Our eco-theological blindspots and the climate crisis (1 comment)
Biblical hermeneutics and the destabilising of the world (0 comments)
END_OF_DOCUMENT_TOKEN_TO_BE_REPLACED

The idea that the mission of the church is in the first place the mission of God or missio Dei has its origins in the thought of Karl Barth. A good summary of its development can be found in David Bosch’s Transforming Mission: Paradigm Shifts in Theology of Mission (389-93).1

Barth’s argument that mission must be understood as an activity or attribute of God himself was first proposed in a paper given at the Brandenburg Missionary Conference in 1932. The full concept was articulated in 1952 at the Willingen Conference of the International Missionary Council. Mission was understood to derive from the Trinitarian nature of God: the Father sends the Son; the Father and the Son send the Spirit; and the Trinitarian God sends the church into the world as a dynamic embodiment of divine love towards creation. Bosch encapsulates the paradigm shift involved:

Mission is thereby seen as a movement from God to the world; the church is viewed as an instrument for that mission…. There is church because there is mission, not vice versa…. To participate in mission is to participate in the movement of God’s love toward people, since God is a fountain of sending love. (390)

Mission, therefore, can no longer be seen merely as the practical extension of the church: it has to be understood fundamentally as a representation of God:

The primary purpose of the missiones ecclesiae can therefore not simply be the planting of churches or the saving of souls; rather, it has to be service to the missio Dei, representing God in and over against the world, pointing to God, holding up the God-child before the eyes of the world in a ceaseless celebration of the Feast of the Epiphany. In its mission, the church witnesses to the fullness of the promise of God’s reign and participates in the ongoing struggle between that reign and the powers of darkness and evil…. (391)

Keep to the right…

The outcome is that “the church encounters a humanity and a world in which God’s salvation has already been operative secretly, through the Spirit”. The mission of God comes to be understood as the Spirit-driven betterment of humanity, and the church may—or may not—choose to align itself with this historical process. Bosch quotes P.G. Aring: “We have no business in ‘articulating’ God. In the final analysis, ‘missio Dei’ means that God articulates himself, without any need of assisting him through our missionary efforts in this respect” (392).

This development led many to question the usefulness of the missio Dei concept. Bosch argues, however, that it still serves to safeguard the critical theological insight that mission is “primarily and ultimately, the work of the Triune God, Creator, Redeemer, and Sanctifier, for the sake of the world, a ministry in which the church is privileged to participate” (392).

These tensions remain in evidence—many would complain, for example, that Brian McLaren took the wrong turning in Everything Must Change, with its apparent eclipse of the church and reinterpretation of the kingdom of God as a process of global social transformation. But the current popularity of the missio Dei concept amongst progressive and emerging churches probably has more to do with the theological support it lends to the argument about incarnational mission. If the church participates in the sending of the Son, then mission should have the same same basic incarnational structure. This accounts for the emphasis on following or imitating Jesus, and is readily translated into a broad range of centrifugal missional practices. So, for example, the Missio Dei community in Minneapolis describes itself as “following Jesus’ way of hospitality, simplicity, prayer, peacemaking, and resistance”.

This is what the whole thing looks like in colour: 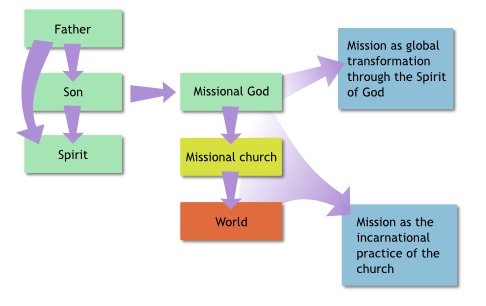 All this has been by way of introduction. The question I will consider in the next part has to do with the relation of the concept to scripture. How does the Bible define the mission of God? And in particular, should we be thinking in terms of a single overarching definition or does the missional activity of God need to be contextualized historically? My guess is the latter….

You may be interested to know a recent book published by eerdmans titled, "the witness of God: the trinity, missio dei, karl barth, and the nature of christian community," has called this standard history of missio Dei's origins and associated flaws into question.

Thanks for the notification. The book is The Witness of God: The Trinity, Missio Dei, Karl Barth, and the Nature of Christian Community, by John Flett (2010). There is a review by Sarah Wilson on the Lutheran Forum, the final sentences of which are worth quoting, though I think we have to take some care over how we now formulate “good news to the nations”:

The deep sickness that many of us intuit in Western Christianity is deeply connected with the loss of the missionary essence of the church.

Above all it becomes clear that a church—whether a congregation, an institution, or the whole body of believers—that no longer can or desires to proclaim the good news to the nations has ceased to be the church in any meaningful sense. Church and mission are not separate entities and acts: they are one. How badly our churches today need to retrieve this long-lost truth.

Yes, get Flett's book!  He disassociates Barth from missio Dei.

The missio Dei concept is alive and well in the missiological discipline, where it has directly informs the sub-discipline of contextual missiology (amongst others), which is somewhat close to where you appear to be going next.

Thus, I look forward to seeing how you are going to treat the subject. Nevertheless, I do wonder if it is necessary to insist upon a dichotomy as you suggest, between overarching narrative and historical (and cultural) contextualisation.

The reality is that both have taken place and both have their place. The key is in how we hold them in tension; it is a peculiarly modern disposition, I perceive, to insist that all such tensions must be resolved with either thesis or antithesis.

John, the dichotomy I was pointing to was between a single overarching narrative and variously contextualized historical narratives—though I can see how that wasn’t clear. It still remains a bit inexact. I think that the terms of the calling of Abraham do point to a very simple single overarching narrative: through his family the original blessing of creation will be recovered for the sake of the nations. But I will argue that beneath this high-level and rather undefined “mission” the situation is more complex and needs to be broken down into periodic narratives—the mission of God is responsive to crises and developments in the history of the family of Abraham. One of these “periodic narratives” is the core biblical one, which, I will argue in the next post, is not simply the story of salvation.

In which case, we're again 'on the same page', Andrew. I think this way of articulating your thesis may prove to be more accessible to a wider audience. I'm off to read your Pt 2 now…

B/t/w—any chance of a user login, like on OST? (Those recent comments came, confusingly, from another 'John'…)

“Image of God” as eco-theological premise?
James Tabor’s failed failed apocalypse of the New Testament argument
Why did Jesus instruct his disciples not to preach the kingdom of God to Gentiles and Samaritans?
Why does Jesus give the kingdom back in the end and become subject again to God?
The throne of Jesus and the throne of God