Whatever happened to the People of God?

One of the ways in which emerging theologies have attempted to correct the individualistic bias of much modern Reformed and evangelical theology has been to stress the cosmic dimension to salvation. So, for example, J.R. Woodward, whom I greatly regret having missed when he passed through Dubai last year, started off a recent post on the “key elements of personal salvation” with the words: “While the Good News of Jesus Christ is both personal and cosmic in nature….”

This emphasis on the cosmic dimension, which relies principally on a few New Testament texts that speak of the final transformation of all creation (cf. Rom. 8:20-22; Rev. 21:1-4), is a substantial improvement on soteriologies that are narrowly focused on the journey that a person makes from conversion to his or her eventual arrival in heaven. There is much social and ethical good that can be drawn from the vision of a world made new. In Love Wins Rob Bell speaks of the essentially earthy and humane vision of the life of the age to come that is found in the Old Testament prophets:

…Jesus and the prophets lived with an awareness that God has been looking for partners since the beginning, people who will take seriously their divine responsibility to care for the earth and each other in loving, sustainable ways. They centered their hopes in the God who simply does not give up on creation and the people who inhabit it. The God who is the source of all life, who works from within creation to make something new.

But in both J.R. Woodward’s opening clause and in Rob Bell’s rich account of the life of the age to come a crucial biblical component has gone missing. The biblical story does not say that “God has been looking for partners since the beginning”. It says that God chose a people in Abraham to be a “new creation”. Bell’s characterization of this people as partners who would “take seriously their divine responsibility to care for the earth and each other in loving, sustainable ways” is conceptually anachronistic in the first place, but we may let that pass. The more significant problem is that it gives the impression that God was looking for well-disposed, eco-sensitive volunteers. That seems to me rather badly to misrepresent the place of a people bound by covenant to the creator in the biblical story.

This has a bearing, moreover, on how we understand the “good news” of Jesus Christ and the locus of salvation in the biblical story—and I think it helps us to see how emerging theologies and New Perspective approaches to the New Testament still fail to connect. You would think that the personal-cosmic spectrum would encompass pretty much everything that needs to be said about salvation. In fact, it collapses—perhaps unintentionally—the structure of a biblical theology by circumventing the role of a chosen people. 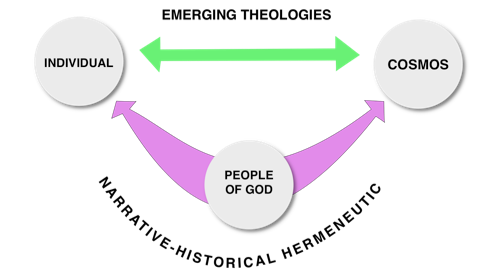 So we have Rob Bell’s God looking for individuals to participate in the work of creational renewal, and we have a “good news” of salvation that has no reference to the community to which it was originally proclaimed, namely first-century Israel. There was a similar oversight in Brian McLaren’s Everything Must Change.

Jesus did not come to save people from their sins. He came to save his people from their sins (Matt. 1:21). The gospel was a public and political announcement to a nation. That is a very different type of story with a very different type of outcome. The story of salvation in the New Testament is, at its heart, the story of the salvation of a people from the “final” destruction of the impending Jewish War—a salvation which, through the over-abounding grace of God, led to the inclusion of Gentiles in the community and the eventual victory of the church over its pagan enemies.

The problem here is not merely exegetical. By disregarding the corporate dimension, the emerging model excludes, or at least greatly reduces, the difficult sphere of practised justice. A significant layer of cosmic and humanitarian concern is added to the outlook of the individual, legitimizing the engagement of Christians in social action. But this does not fundamentally change the structure of things: we still have a very “modern” theology organized around the needs and potentials of individual participants in secular society.

We can understand the emerging church’s reluctance, on the one hand, to perpetuate the failings of the old institutional church, and the desire, on the other, to recover some degree public credibility, some ethical integrity. But this cannot be achieved at the expense of diminishing the concrete life and witness of the church as community—indeed, as a place where “new creation” is practised and not merely talked about.

As I understand it… Jesus did indeed “saved his people from their sins” – that many didn’t “realise” its benefits either in a renewed heart of service [justice] toward others, and or escape from their forth coming Ad70 fiery end, aka “the lake of fire”, in no way diminished the reality of Israel’s redemption as formerly promised and subsequently fulfilled.

Again as I understand it… it was this fullness of Israel’s redemption inaugurated in Christ’s ministry and ratified through the cross and consummated in His parousia that was the catalyst for the then wider reconciliation of man i.e., the cosmic work of God.

In other words, the “creation” language such as Rom 8:18-23 speaks to Israel’s “covenant renewal” through those first century “firstfruit saints” called to facilitate such renewal… the few ON BEHALF OF the many – the firstfruits always sanctified the whole and ultimately [cosmically] Israel was the world’s firstfruits to God – Jer 2:3a.

Hey bro. Thanks for the link to my blog post, and for your post here.  I’m sorry I missed you when I was passing through Dubai as well.

The timeliness of your post here is cool, because I’m currently working on a paper in which I’m wrestling through the doctrine of election.  I’m seeking to compare and contrast a typical calvinist, in this case John Piper, with Lesslie Newbigin, who takes quite a different approach on this issue.  Both put high value on the doctrine of election, both have missional passions, but they come from totally different perspectives.  All of that to say, that while my blog post wasn’t on election and the choseness of God’s people, I think that Grenz certainly mentions this in his approach to his focused look on personal salvation, as he speaks of God’s foreknowledge, and the the divine intention for us “the people of God” in the participation of the “eternal community”.  As you may know, the central element to Grenz’s theological approach is seen in his title, “Theology for the Community of God”, which I mention in the post.  So if I didn’t do this justice on this segment of his view of the personal dimension, my apologies.  For the community or people of God is central throughout his excellent work.  I personal feel the corporate dimension is absolutely vital to keep in mind, thus it would have been even better for me to start the blog post speaking of the good news as personal, corporate and cosmic.  For me the communal aspect is a given and is fairly predominate in my writings as a whole and a strong part of the focus of the book that I’m currently writing for IVP.  So thanks for the call out.  Shalom.

Thanks for the response. I realize that it was a bit unfair picking on that particular statement. It just seemed a good opportunity to highlight what seems to me to be a general shortcoming in emerging theologies. My concern, really, is less about the practice, which as so often may well be running ahead of theology. It’s about not letting modern theological culture flatten the historical structures of New Testament thought. As I’ve said before, I think the future for a robust “evangelicalism” lies in the convergence of the emerging movement, broadly understood, and New Perspective readings of the New Testament, broadly understood. By the way, I did a series of posts on election recently, which are listed at the bottom of this one.

Thanks for the link to the post on election and the link to John Piper’s thoughts as well.   What I have found interesting so far is that Newbigin has whole chapters in various books on the topic, but in all of Piper’s books, I haven’t found where he deals with the topic in systematic way in a chapter or two.  His thoughts are much more scattered in his writings.  Are you aware of a book written by Piper that addresses the issue head on?  Let me know.  Peace.

Awesome info!
The evil one is fast at work in the world! And I think that we, as humans, cause some of our demise by things that we do and don’t do in the environment, (ie.pollution, global warming, etc). We had to have things “our way”, which included sin in the very beginning, and God loved us so much that He let us have free will. Oh, how much we must hurt our Heavenly Father!

God loves us and His plans are to continue loving us! Plans to prosper; not to harm!

Have you ever considered about including a little bit more than just your articles?

I mean, what you say is valuable and everything.
However just imagine if you added some great visuals or video
clips to give your posts more, “pop”! Your content
is excellent but with images and video clips, this site could definitely be one of the very best in
its niche. Good blog!

Three ways to fit the story of salvation into history
Good news for all the people
Some women and the story of God’s people, and a brief obituary
Rob Bell, Justin Taylor, love fails, and the meaning of salvation