davo: When the ordinary Jewish…
Mark Newton : What I don’t understand is…
Kevin Holtsberry: Very helpful summary. I…
Andrew: Thanks, for this, Richard…
Samuel Conner: Just starting into your new…
END_OF_DOCUMENT_TOKEN_TO_BE_REPLACED

In the form of a God: The Pre-existence of the Exalted Christ in Paul: what the book is about and why (2 comments)
Notes on J. Richard Middleton’s The Liberating Image: The Imago Dei in Genesis 1 (0 comments)
Our eco-theological blindspots and the climate crisis (0 comments)
Biblical hermeneutics and the destabilising of the world (0 comments)
END_OF_DOCUMENT_TOKEN_TO_BE_REPLACED

Ever since the early Jewish Christian movement first pushed its way into the Greek-Roman world, the church has built its house on what appeared for many centuries to be the immovable and unshakeable sandstone of theology—that is, theology as post-biblical rational discourse, in its multiplicity of forms. The intellectual storms and floods of the last two hundred years, however, have severely eroded that foundation, and I think that the church would be well advised now to abandon its former habitation and rebuild its worldview on the granite of a narrative-historical hermeneutic. 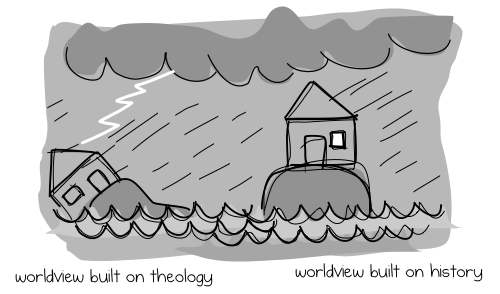 Against this admittedly overstated background I think that Christian Smith’s response to the problem of biblicism in his book The Bible Made Impossible is not much more than an exercise in redecorating the walls of a house whose desolation has drawn near.

What Smith means by ”biblicism” is “a theory about the Bible that emphasizes together its exclusive authority, infallibility, perspicuity, self-sufficiency, internal consistency, self-evident meaning, and universal applicability” (roughly loc. 65 in the Kindle version).

His argument against it is basically that it is refuted by the fact that sincere, intelligent interpreters cannot agree about the meaning of the Bible (Smith calls this “pervasive interpretive pluralism”), and that they cannot agree because the Bible is irreducibly ambiguous or multivocal.

So Smith suggests that evangelicals need to learn to live with the complexity and ambiguity of scripture, resisting the need to flatten out all the unsightly wrinkles and creases with the heavy steam-iron of the theory of biblical perfection, accepting that God has graciously accommodated himself to finite and fallen human perspectives.

He then argues that Christians “need to much better distinguish dogma from doctrine and both of those from opinion, in a way that demands much greater humility, discernment, and readiness to extend the fellowship of communion to those who understand scripture differently (loc. 2736).

The typology comes from Roger Olson’s book Reformed and Always Reforming (Baker Academic, 2007). ”Dogmas” are the non-negotiable beliefs, such as the Trinity and Nicene Christology. “Doctrines” are less important—they have to do, generally speaking, with the beliefs that we feel that orthodox Christians can legitimately disagree over, such as the beliefs that divide Calvinists from Wesleyans. Then we have “opinions”, which are of least importance and include such adiaphora as the “preference for baptism by immersion rather than sprinkling”, or the choice of home schooling over public schooling.

So we have dogmas, doctrines, and opinions but no narrative—that is, none of the stuff of the biblical text as it determines its own relation to the believing community. Dogmas, doctrines and opinions are all forms of belief and are, therefore, a prejudgment of scripture—not least the non-negotiable dogmas—which means that the biblical narrative is not allowed to speak for itself.

Smith’s model is really just a way of doing theology nicely, tolerantly. It leaves unaddressed what to my mind is the much more fundamental challenge: do we continue to construct the evangelical worldview theologically or should we take the opportunity afforded to us by developments in New Testament studies—and, of course, by a massive shift in Western culture—to rebuild the evangelical worldview on historical foundations? The Reformation paradigm can be reformed until the cows come home, but it is still a pre-critical paradigm that is always going to struggle to understand how history works.

The prioritization of theology shows up in Smith’s Barthian hermeneutic (chapter 5). This is undoubtedly an improvement on the biblicist method of treating the Bible as “an instruction manual containing universally applicable divine oracles concerning every possible subject it seems to address”. But the centrality of Jesus for the reading of scripture has still patently been determined theologically:

We only, always, and everywhere read scripture in view of its real subject matter: Jesus Christ. This means that we always read scripture Christocentrically, christologically, and christotelically, as those who really believe what the Nicene and Chalcedonian creeds say. (loc. 2000)

That is how theologians speak, not historians, and it presupposes later, post-biblical, culturally conditioned theological perspectives. This is not the “inductive” approach to biblical authority which elsewhere Smith is keen to advocate (loc. 2649). It is just another method of harmonization, which Smith is elsewhere keen to do without (loc. 2693-2723). It is a rejection of the principle of “accommodation”—not just to human understanding but to the contingencies of history—which elsewhere Smith is keen to affirm (loc. 2663-2693).

I think that there are properly narrative-historical ways to affirm the hermeneutical significance of Christ, but we won’t get there by starting from Nicaea.

I applaud your direction.  Nicaea and the councils that followed built on the foundation of church and understood (or misunderstood) Christ from that perspective.  Our task is to bypass them and go back to the Scriptures in order to establish the foundation of Christ - and then understand church from that perspective.  If you do so, it will truly turn your world upside down - or right side up.

Given that Jesus and His apostles prophesied apostasy for the church in that generation, and even testified to the signs of its inauguration (e.g. 2 Tim 4:9-11, 1 Jn 2:18; Rev 2-3), we should not be surprised that the generation following was confused and led astray.

It happened precisely because the gospel was carried interculturally to Gentiles, or “Greeks” as they are encountered in the NT, in antithesis with the Jews, whose worldview was essentially philosophical in theory and might-is-right in practice.

The grim reality is that the culture of Evangelicalism—unwittingly at times, deviously at others—maintains a legacy of emphases that are rooted in this period of history and its worldview. Frequently, theological ‘battles’ being fought today may actually be observed to be about the deeper issue of worldview—a concept only relatively recenty being properly appreciated, in the post-Modern, post-Colonial period.

It is interesting to me that several of the critical threads of theology being explored by Andrew—such as a discussion of how we understand the divinity of the Messiah—are also being explored, from an entirely different startpoint and trajectory, by scholar Paul Sumner, here, based upon his search to read the Bible with a specific and profound appreciation for the Hebraic worldview and the contexts of the biblical narratives.

The seeds of corruption cannot be attributed exclusively to Gentile influences as those seeds were also present in the Hebrew culture of the 1st Century.  The same synagogue system of the Diaspora that was so effective in spreading the gospel throughout the whole world also became as complicit as the Gentiles in co-opting the message of Christ for purposes of preserving rank, privilege, and physical sustenance.  The Nicolaitans were mixed in with the true believers, and only at the harvest of the Second Coming in the late 1st Century did the Lord make the separation between the goats and sheep.  Even then, it was a spiritual separation, not a physical one.  Even today, “the Lord knows those who are His.”  Therefore, “let everyone who names the name of the Lord abstain from wickedness.”

Thanks, Mike. I’m not sure how your observations connect with my own, which for the record, were directed at Doug’s question:

You seemed to be giving Doug a different answer than mine, one that contradicted mine.  Therefore, I was defending my position to you, hoping you would reconsider it.

Different, yes. Contradictory? Not necessarily and certainly not by design. I would suggest we are addressing our subjects from different perspectives.