Andrew: That’s a very interesting…
Peter: In the Old Testament we see…
Andrew: Yes, the distinction between…
Scott: I also forgot to mention…
Scott: Thanks for the reply, Andrew…
END_OF_DOCUMENT_TOKEN_TO_BE_REPLACED

What does Luke’s account of Paul’s visit to Athens tell us about how to do “missional church”? (2 comments)
Not sure about the charts: please explain… (0 comments)
Kingdom of God and missional church: not as difficult to define as you might think (2 comments)
Defying history: the future of the church in a Third World Culture (14 comments)
END_OF_DOCUMENT_TOKEN_TO_BE_REPLACED

When prophecy fails: why do people always assume that Jesus got it wrong?

I have started reading Frederick Murphy’s book [amazon:978-0801039782:inline]. Why? Because I think that the theological paradigm for interpretation of the New Testament has passed its sell-by date and that apocalyptic is a crucial component of the alternative historical paradigm. The book is described as a “Comprehensive Introduction”, and it appears to be just that.

One of the things that Murphy discusses in the opening chapter is the relationship between apocalyptic and prophetic literature. A key difference has to do with how they deal with history. Both genres expect divine intervention in human affairs, but whereas in the case of prophecy “that intervention deals with a specific historical situation and the resolution results in something not so different from what preceded it”, apocalypticism generally predicts an imminent end to history (21). Significantly, Murphy points out that in prophecy the language of “cosmic disruption”—of a “new heaven and new earth”, for example—is “for the most part metaphorical”. I would argue that this is also true for much apocalyptic writing, but that is not really the point I want to make here.

A couple of pages later there is a section entitled “When Prophecy Fails”. Murphy makes the obvious point that so far all predictions of the end have bitten the dust—so why do people keep doing it? “One might think that after more than two thousand years, apocalypticism would have been definitively discredited and would have lost its attraction” (24).

To account for the persistence of the apocalyptic outlook Murphy briefly outlines the theory of Festinger, Riecken and Schlachter that it is driven by cognitive dissonance. When experience clearly contradicts belief, people will often attempt to reduce the tension “first by believing even more strongly in their original conviction and second by converting more people so that they have more social support”. In other words, when a person finds himself stuck in a hole of cognitive dissonance, he is likely to try to solve the problem by making matters worse—not only by digging deeper himself but also by inviting other gullible people to dig with him.

Perhaps that’s true. But in the course of this analysis Murphy makes the stark observation that:

Many do not realise that Christianity itself is the result of failed prophecy. Jesus apparently expected the kingdom of God to come soon, and this urgent expectation of an imminent end pervades the New Testament.

There is still a lot of the book to go, including sections on the Gospels and on Jesus as an apocalyptic prophet, but why is the possibility not at least considered that Jesus was more a prophet than an apocalypticist, that he spoke about an end within history rather than the end of history, and that his sparing use of the language of cosmic disturbance was metaphorical? Why are such possibilities allowed in general in Murphy’s introductory chapter but ruled out for Jesus? 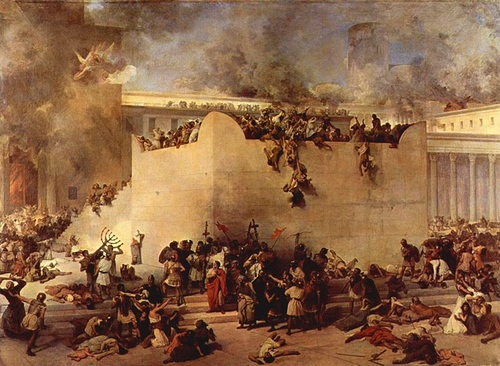 The omission is all the more remarkable given that the front cover shows Francesco Hayez’ painting The Destruction of the Temple in Jerusalem. If Jesus was anything, he was a prophet who drew widely on Old Testament narratives of judgment and restoration to speak about the crisis facing first century Israel. Surely, then, the place to start in any discussion of Jesus’ “apocalyptic” language is with the towering historical fact that he was believed to have predicted judgment against the temple and that this prediction was fulfilled. This was at least a central part of what he meant when he said that God would act decisively within a generation, within the lifetime of many of those listening to him, to establish his kingly rule with respect to his people.

Hi Andrew, I read your response to me on an earlier post regarding apocalypticism. http://www.postost.net/comment/3332#comment-3332

I appears you are well versed in preterism but not in apocalypticism.

Aside from having read my article have you had time to read any of the scholarly materials I suggested and listed here:  http://www.postost.net/comment/3331#comment-3331

There’s also a paradigm shift going on regarding the Parables of Enoch which mention the “Son of Man,” placing the parables of Enoch earlier, even as possible influences on Jesus and/or his followers. See this new book, a collection of essays by biblical scholars:  http://www.amazon.com/Parables-Enoch-Paradigm-Jewish-Christian/dp/05676…

And of course the apocalypticism of the earlier Dead Sea Community is relevant both to tales of both the Baptist and Jesus in the NT.

The Historical Christ and the Theological Jesus
By Dale C. Allison
http://books.google.com/books?id=WzOfssjUsIIC&lpg=PA99&ots=8sco0lFl6r&d…

THE COMING OF THE SON OF MAN IN MARK’S GOSPEL
Edward Adams
http://www.tyndalehouse.com/tynbul/library/TynBull_2005_56_2_04_Adams_S…

Eschatology and exhortation in the Epistle to the Hebrews
By Scott D. Mackie
http://books.google.com/books?id=m98Au2mZpowC&lpg=PR5&ots=JdVg-LJhPl&dq…

Eschatology in Galatians: rethinking Paul’s response to the crisis in Galatia By Yon-Gyong Kwon
http://books.google.com/books?id=b8aWYXqmG00C&lpg=PR7&ots=wE-74yjHEv&dq…

THE HISTORICAL JESUS AND THE FINAL JUDGMENT SAYINGS IN Q–A Dissertation Submitted to the Graduate School of the University of Notre Dame in Partial Fulfillment of the Requirements for the Degree of Doctor of Philosophy
by Brian Han Gregg, B.A. M.Div. April 2005
http://etd.nd.edu/ETD-db/theses/available/etd-04122005-120750/unrestric…

Ed, thanks for all this. I’ve looked at a lot of the stuff you’ve cited, and it’s obviously far too much to deal with here. So how about a quick and scrappy response to the points raised against Wright by Michael Kok?

1. There are strong arguments that Jewish, Christian and Greco-Roman authors took the cosmic imagery literally.

Only the Christian texts are listed.

Hebrews 12:25-28 has in view Israel only, not the whole world: verse 25 is a reference to Moses. Haggai 2:6 is loosely quoted in verse 26: When God restores his people, the nations will bring their treasures and will fill the temple with glory. The argument of the passage is that Israel faces destruction but the Jewish-Christian readers of the letter have received a kingdom that cannot be shaken—one which will clearly continue beyond the catastrophe of AD 70.

How we read 2 Peter 3:5-13 will depend a lot on how we understand its relation to Isaiah’s account of judgment on the enemies of Israel: ia judgment that will rend the heavens, make the mountains melt (Is. 64:1-12; cf. Ps. 96:5 LXX); the host of heaven shall rot away (34:4); and the restoration of God’s people will be a new heaven and a new earth (65:17). Peter’s language may be apocalyptically heightened, but I’m not convinced that he has in mind anything more “cosmic” than that the whole religious-social order of the ancient world would sooner or later be overthrown.

The relationship of Revelation 6:12-17 to Isaiah 2 and Hosea 10:8 suggests, as I argued in [amazon:978-1620324592:inline], 191, that ‘What terrifies the “kings of the earth and the great ones…” is not the prospect of their own immediate destruction but the scale of the catastrophe that is coming upon Israel.’

Finally, Barnabas 15 has to be taken in the context of the author’s new creation theology: the new world has already begun but they wait for judgment on the powers, including satan, that rule the present era of lawlessness, and the vindication of the righteous. I would connect this with the widespread early Christian expectation that the God who had raised Jesus from the dead would eventually “judge” the Greek-Roman oikoumenē and bring to an end the hegemony of pagan imperialism.

And just because the ancients were familiar as we are with solar eclipses and falling starts does not mean they could not use such phenomena as metaphors for the heavenly impact of historical change.

2. The earliest Christians seem to have understood the tradition underlying Mark 13:26 as referring to the second coming.

As I see it, for Jesus the destruction would of Jerusalem and the temple would be the fundamental vindication of his claims to kingship. But the vindication of Jesus could not be separated from the deliverance and vindication of those who followed him. There is a coming to earth dynamic, which is to be understood in much the same way as Old Testament accounts of YHWH coming to deliver his people from their enemies. In fact, it is probably better to understand Mark 13:26 as the “coming” of the Son of Man, who has previously received kingdom, etc., from God, to gather, consolidate, deliver his followers who had been subjected to the tribulations of the last days of second temple Judaism (Mk. 13:20). The parousia motif also carries the idea of the inauguration of Jesus as king over his people and over the nations in place of Caesar.

3. The “coming of the Son of Man with the angels to usher in the eschaton in 13:26-27 seems to be spectacularly visible and have universal implications”.

If we assume that the New Testament writers borrowed their language from the Old Testament (as opposed to making up a new, larger in scope definition for the images) then,

Isa 34:4  All the host of heaven shall rot away, and the skies roll up like a scroll. All their host shall fall, as leaves fall from the vine, like leaves falling from the fig tree.

applies to national destruction by military invasion, in this case Edom.

Mar 9:48  ‘where their worm does not die and the fire is not quenched.’

Isa 66:22  “For as the new heavens and the new earth that I make shall remain before me, says the LORD, so shall your offspring and your name remain.
Isa 66:23  From new moon to new moon, and from Sabbath to Sabbath, all flesh shall come to worship before me, declares the LORD.
Isa 66:24  “And they shall go out and look on the dead bodies of the men who have rebelled against me. For their worm shall not die, their fire shall not be quenched, and they shall be an abhorrence to all flesh.”

None of this language implies that all of physical creation will be annihilated (a doctrine probably brought into Christianity by those already familiar with Stoicism).  The rebellious nation was due to be destroyed while the faithful remnant in it was due to be saved and rewarded with a new covenant.  Instead of looking for definitions in CGI, we need to be doing it in the historical use of the words.

If we assume that the New Testament writers borrowed their language from the Old Testament (as opposed to making up a new, larger in scope definition for the images) then….

Or as opposed to drawing on extra-biblical apocalyptic traditions—with a couple of notable exceptions. It is with reference to the scriptures, beginning with Moses and all the Prophets, that Jesus interpreted the things concerning himself for the benefit of the two disciples on the road to Emmaus, not with reference to the Similitudes of Enoch. Thanks, Doug.

What does Luke’s account of Paul’s visit to Athens tell us about how to do “missional church”?
Not sure about the charts: please explain…
Kingdom of God and missional church: not as difficult to define as you might think
Defying history: the future of the church in a Third World Culture
What exactly did Jesus get right?
The apocalyptic significance of Easter Week: suffering and kingdom
The apocalyptic significance of Easter Week: Jesus and the temple
Jesus and the judgment of the Watchers
END_OF_DOCUMENT_TOKEN_TO_BE_REPLACED