What does Luke’s account of Paul’s visit to Athens tell us about how to do “missional church”? (0 comments)
Not sure about the charts: please explain… (0 comments)
Kingdom of God and missional church: not as difficult to define as you might think (2 comments)
Defying history: the future of the church in a Third World Culture (14 comments)
END_OF_DOCUMENT_TOKEN_TO_BE_REPLACED

How Paul saw the future

Paul had a sharp and vivid understanding of what the future held. It took the form of a prophetic narrative that would affect his own people Israel, the nations and the churches. It was not a matter of peripheral interest, an appendix to his theology. The narrative is pervasive in his letters and determinative for faith. People were converted to a new belief about the future. They believed, for example, that a day of wrath was coming from which they would be delivered by Jesus:

They believed that they would sooner or later inherit, as a community, as a nascent culture or civilization, a radically new political-religious order when the God of Israel would be acknowledged as sovereign over the nations.

The expectation, moreover, was that the coming Day of the Lord (1 Cor. 5:5; 1 Thess. 5:2; 2 Thess. 2:2), when this vision of the future would be fulfilled, was not far off. The apocalyptic narrative overlay and reinterpreted the immediate historical experience of the synagogues and churches in the ancient pagan world. Its climax would come within a foreseeable and relevant future.

The point to stress here is that biblical “theology”, even at its most exotic and speculative, always addresses or has reference to the concrete, historically determined condition of the people of God amidst the nations.

For convenience the landscape of Paul’s eschatology can be mapped in two parts—what it meant for the “saints” to whom Paul addressed his letters and what it meant for everyone else. Please note that the biblical references are not proof-texts. They are pointers to whole arguments and narratives.

What the Day of the Lord would mean for everyone else 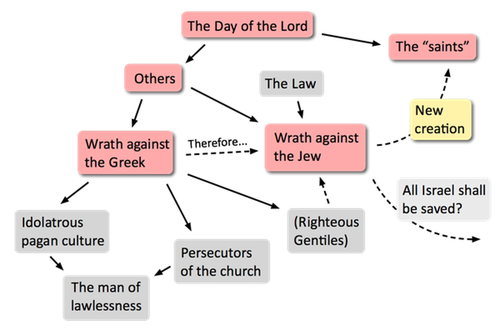 1. The overarching intention of the God of Israel was to judge the pagan system that had for so long opposed him and to install his own “Son” as king on his behalf above all rulers and powers (Rom. 1:18-32; cf. Acts 17:31).

3. The “man of lawlessness”, who appears to be a blasphemous pagan king in the mould of Antiochus Epiphanes, would be brought to nothing by the Lord Jesus at his coming (2 Thess. 2:3-8).

4. Righteous Gentiles would be “justified” when YHWH judged the Greek-Roman world and would even condemn unrighteous Israel (Rom. 2:6, 14-16).

5. For God to judge the pagan world with integrity, however, he had first to judge his own people, who had brought the name of God into disrepute among the nations (Rom. 2:24; 3:6). They would not be justified by their works of the Jewish Law on the day of God’s wrath. Rather, the Law would hold them to account (Rom. 3:19-20). Nothing short of a new creation would remedy the situation.

6. Paul does not expect his people to escape the catastrophe of divine judgment, but he retains the hope that after judgment the nation of Israel would repent of its disbelief and so be saved (Rom. 11:26).

What the Day of the Lord would mean for the saints 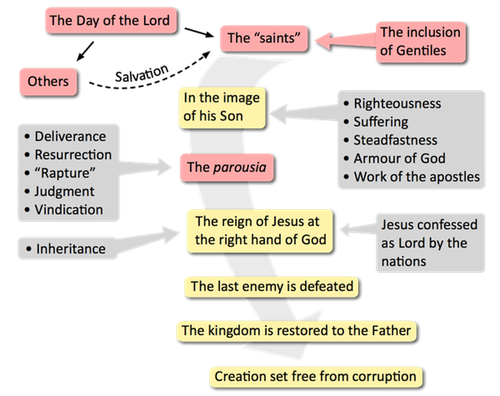 1. The inclusion of Gentiles in the family of Abraham pointed to the fact that YHWH would demonstrate himself to be God not of the Jews only but also of the nations (Rom. 3:29-30).

2. The churches were communities of eschatological formation—that is, they were designed for an eschatological purpose. Practically speaking, they were the means by which the new future would be brought about.

4. The churches could expect to face considerable opposition and persecution in the period leading up to the Day of the Lord. To the extent, however, that the saints were conformed to the image of the first martyr and re-enacted the story of his suffering and vindication, they had the assurance that they would overcome even the last enemy, death (Rom. 8:16-39). They are communities of the Son of Man, against whom the pagan empire made war, but who remained faithful and were ultimately vindicated and awarded the kingdom (cf. Dan. 7:21-22).

6. Paul was very conscious of the fact that it was the responsibility of the apostles to ensure that the churches were fit for eschatological purpose (1 Cor. 3:10-15). They would be his crown and ground for boasting on the Day of the Lord (Phil. 2:16; 1 Thess. 2:19).

7. Because the authority to judge had been given to Jesus, the Day of the Lord would be the day when Jesus, not YHWH, came to judge and save.

10. The reign of Jesus at the right hand of God is to continue until the last enemy, death, has been destroyed, at which point the authority to rule will be given back to God, the Father, Jesus himself will be subjected to God, and God will be all in all (1 Cor. 15:24-28).

This is roughly the story that Paul tells about the future, as I see it. It is not an unprejudiced reconstruction of that story. It is as I see it. It is shaped by a number of assumptions that I make regarding i) how Paul has used his source material, the Old Testament in particular; and ii) how he understood the relation of such material to history. It is the sort of narrative that emerges when we read Old Testament and Jewish apocalyptic as an attempt to redescribe future historical events as the outworking of the intentions of Israel’s God. Or to turn it around, Paul has constructed a narrative of judgment and kingdom that demands an eventual historical outcome having to do with the real-world, political-religious relation between Israel and the nations.

In your 8th point you cite 1 Cor 15:23 and 1 Thess 4:16 in regards to the resurrection experienced by, I am guessing, the saints of the early church. I know that many Christians interpret those passages as referring to the resurrection of the last day, but are you saying that they can be understood as having already taken place? If so, does that mean that both the dead and the living saints of the early church experienced the resurrection, as it says in 1 Thess 4:16-17 and 1 Cor 15:51-54? Also, since your 8th point cites 1 Cor 15:23 in regards to something that has, presumably, already taken place, how do you reconcile that with your citation of 1 Cor 15:24-28 (in your 10th point) in regards to something that I am guessing you would say has not already taken place? I’m not trying to trip you up or anything, just trying to understand how it all fits together in your understanding.

Raul, I think that pretty much gets my point. If the defeat of idolatrous Rome, the deliverance of the persecuted saints, and the revelation and acknowledgment of Jesus as Lord by the nations of the oikoumenē constitute the primary historical end that Paul has in mind, then it would appear an unavoidable conclusion that he believed that the dead in Christ, perhaps the martyrs in particular, would not miss out on this vindication. Revelation 20:4-6 seems to me to confirm this.

My (somewhat tentative) suggestion with regard to 1 Corinthians 15:20-28 is that the narrative runs thus: Jesus is raised as firstfruits of the martyrs; at the parousia, when his is confessed by the nations, the dead in Christ are raised; Christ reigns (with the martyrs) throughout the ages until the last enemy is destroyed. It is not part of Paul’s purpose here to affirm a final resurrection and judgment of all the dead as we see it in Revelation 20:11-15.

There is no resurrection of the living. You have to be dead in order to be resurrected. Paul speaks in 1 Thessalonians 4:17 of the living being “caught up” with the resurrected dead in the clouds to meet the Lord—in other words, both the living and the dead share in the vindication that Jesus brings with him at his parousia but in different ways.

Whether Paul imagined that the living would also reign with Christ, I’m not sure. If Christ is expected to reign throughout the coming ages at the right hand of God in heaven, then it seems more likley that he thought that the dead would reign with him. The living churches would simply experience the historical vindication represented by the conversion of the empire.

What does Luke’s account of Paul’s visit to Athens tell us about how to do “missional church”?
Not sure about the charts: please explain…
Kingdom of God and missional church: not as difficult to define as you might think
Defying history: the future of the church in a Third World Culture
What exactly did Jesus get right?
The apocalyptic significance of Easter Week: suffering and kingdom
The apocalyptic significance of Easter Week: Jesus and the temple
Jesus and the judgment of the Watchers
END_OF_DOCUMENT_TOKEN_TO_BE_REPLACED

Kingdom of God and missional church: not as difficult to define as you might think