davo: When the ordinary Jewish…
Mark Newton : What I don’t understand is…
Kevin Holtsberry: Very helpful summary. I…
Andrew: Thanks, for this, Richard…
Samuel Conner: Just starting into your new…
END_OF_DOCUMENT_TOKEN_TO_BE_REPLACED

In the form of a God: The Pre-existence of the Exalted Christ in Paul: what the book is about and why (2 comments)
Notes on J. Richard Middleton’s The Liberating Image: The Imago Dei in Genesis 1 (0 comments)
Our eco-theological blindspots and the climate crisis (0 comments)
Biblical hermeneutics and the destabilising of the world (0 comments)
END_OF_DOCUMENT_TOKEN_TO_BE_REPLACED

Deeper into the doctrine of the second coming of Jesus

The Gospel Coalition has been doing an intermittent series over the last year tagged “Deeper into Doctrine”. For people who prefer their theology in narrative form—and for post-moderns generally, if there are still any around—“doctrine” is a dirty word. But I don’t see any objection to formulating propositional summaries of core biblical ideas, provided that i) we don’t disengage from the critical interpretation of the texts; and ii) we don’t lose sight of the narrative framework. This is where I have a problem with Sam Storms’ definition of the doctrine of the second coming of Jesus:

The second coming of Jesus Christ is the personal (he won’t send an angel in his place), visible (every eye will see him), physical (he will come in the body in which he was crucified, raised, and glorified) return of Jesus to this earth to consummate the salvation of his people (Phil. 3:20-21; Heb. 9:28; 1 John 3:1-3), to be glorified in them (2 Thess. 1:10), and to inflict vengeance on those who have defied him and the gospel of grace (2 Thess. 1:8). At his first coming Jesus came as a suffering servant, a sacrificial lamb, “to put away sin by the sacrifice of himself” (Heb. 9:26), and to inaugurate the kingdom rule of God. We read in Hebrews 9:28 that he “will appear a second time, not to deal with sin but to save those who are eagerly waiting for him” and to consummate the kingdom in its fullness.

Doctrine inevitably gets constructed from the perspective of the church needing to define what it believes. A future “coming” of Jesus appears to be an important part of New Testament teaching, so the church has had to ask what it means to believe that, whether in the fourth century or the fifteenth century or the twenty-first century. So what we end up with is a doctrine that, as a matter of necessity, transcends historical context. The “second coming” has to apply to everybody’s future. 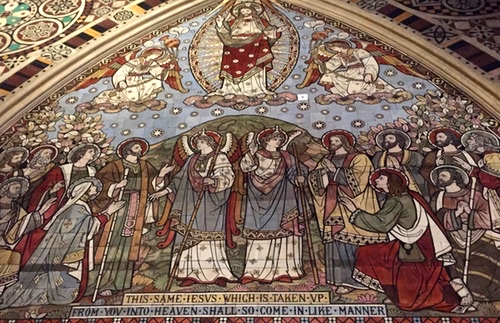 Critical interpretation of the New Testament, however, is currently pushing us to give much more weight to the original historical context, which is a Jewish context interpreted to a large degree by the scriptures and other Jewish writings from the period. On that basis the question we have to ask is: What were Jesus and his followers trying to say about their future—not ours, not everybody’s—when they spoke about him coming with the clouds of heaven? Why did they think that this was such a valuable resource for making sense of their historical outlook?

The basic New Testament conception is of the Son of Man coming on the clouds, accompanied by angels, to defeat his enemies, deliver and reward his followers, and establish his kingdom. To his credit, Storms’ summary of the doctrine has more or less this narrative shape: Jesus returns to consummate the salvation of his people, to be glorified in them, and to inflict vengeance on the bad guys. But the context has been stretched so far that it has snapped, with one end fixed back in the first century and the other end pinned like the dangling tail of a donkey at the outer edge of world history.

This is doing doctrine at the expense of scripture.

The motif has its origins in Daniel 7:13-27, where the Son of Man represents Jews who remained loyal to the covenant in the face of intense persecution from the Hellenistic king Antiochus Epiphanes. Daniel’s Son of Man may be a real individual, a messiah; or he may be a symbolic representation of the persecuted saints of the Most High. But it’s the story that matters. When God’s people are oppressed by a more powerful pagan nation, God intervenes to judge the oppressor, deliver his people from their afflictions, and give a kingdom—dominion and rule over the nations—to the Son of Man who comes on the clouds of heaven.

We have to ask whether there is any reason not to think that Jesus and his followers used the motif in much the same way and for much the same purpose. I don’t think there is. Their argument is not that Jesus will come at the end of history to wrap everything up. It seems to me rather significant that when John does describe a final judgment and new creation (Rev. 20:11-21:8), he makes no reference to a Son of Man coming on the clouds of heaven. Narratively speaking, the motif doesn’t belong there.

The New Testament uses the motif to speak about a rather different type of event, to tell a story very much like the story that Daniel told. Jesus and his followers expect the early communities of believers to have to face severe persecution, first from the Jews, then from Rome. The Son of Man story, retold about Jesus, gives them the assurance—in appropriate prophetic language—that if they remain faithful to him and to the gospel, he will come with the glory and authority that he has received from the Father to deliver and vindicate them; and they will be given a share in his rule over the nations.

What matters to them is their immediate historical circumstances, their foreseeable future; and it is this—not the end-of-the-world—that the “doctrine” of the coming of Jesus with the clouds of heaven addresses.

I suppose the argument would be that in Jesus’s self association with Daniel 7, there is the yet-to-be-fulfilled 7:27. The still unfulfilled (or mistaken) part of the prophecy takes us outside the time frame of Israel’s history, and outside the context of Israel’s limited story into a wider worldwide framework. Historically, Jesus introduced both wider time frame and wider context.

What makes you so confident that Daniel 7:27 remains unfulfilled? According to Daniel’s story, when God judges Antiochus Epiphanes and the empire of the Greeks, rule over the nations will be transferred to the persecuted people of the saints of the Most High, to Israel. That didn’t happen.

The New Testament, however, retells the story in the Roman context, as other Jewish writers did, and speaks of a time when God will judge the empire of the Romans. That did happen. Pagan Rome was overthrown and rule over the nations was given to the persecuted followers of Jesus. That was Christendom, when in historical terms Christ and the martyrs reigned over the territories that were formerly subject to Caesar (cf. Rev. 20:4).

The manner of this kingdom, as you say, was very different from much Old Testament and Jewish expectation. It was gained not through normal—or even abnormal—political or military means but through the faithful suffering of Jesus and his followers. And because it was gained through suffering and death, Israel’s king reigns not on earth but at the right hand of God in heaven, in the Jerusalem above. But it is nevertheless a rule over the nations (Ps. 2:9; Rev. 12:5). It is envisaged as a political kingdom.

Just stumbled upon this and appreciated the clear perspectives Andrew makes in many of these posts and this comment. Please receive and view this comment as a general application with our approach to scripture. As we ‘come’ to the Word (Jesus) …no matter what text old or new, our approach should be the same…(remove our sandals and come before God ‘naked in our being or knowledge’ for God has to reveal what He means to us…personally. When He does, the message will never contradict the Word as a whole. It will always align to the ‘narrative’ God we ‘know’ …the great ‘I am’ (resolved and personal) ‘tell them, I am the God of A, I, J …(unresolved and traditionally recognized).

That being said, the follower of Christ will forever be frustrated with comprehending TRUTHS like the Second Coming of our Lord — IF —  they haven’t ‘removed the high places’ from their faith (traditional doctrines, man-defined treatments OF God’s Word. Once this is removed and we sincerely approach the Word of God 1:1, as was instructed, THEN the mysteries of the Kingdom WILL be revealed, because God already SAID …thru His Son ( His Word) that the Keys of the Kingdom (unlocking Revelation) are given (I give you)…to His Church. But the KEY to that verse…is to His Church …and UNLESS one ‘hates’ all those other things ( like man-defined things)…one cannot BE His follower.)

Again, my point is that we can attempt to FIND Truth through our own reasoning… OR …we can ‘simply’ take God…AT His Word. When we do ‘follow’ what Jesus says…we actually SEE the Truth rise above the ‘clouds of confusion’. We ARE His Kingdom when we have Jesus (the Kingdom is at hand)…like Heavenly Embassies here on earth. What that will all eventually LOOK LIKE is up to God, our Heavenly Creator. We’re not to step out of the scope of operation that Jesus bestows upon us. As God shouted on the mountain when the Word was being illuminated to the (3) and Peter’s fleshly response was to ‘define’ what was being revealed to him…Just LISTEN to my Son! Just HEAR and follow Jesus lead. You will be amazed at all that He reveals. It will personally align and mature you in Spirit.