Gerald: TreeI see the New Heaven as…
Samuel Conner: This is just an…
Helge Seekamp: Here the transcription as…
Helge Seekamp: Now, I worked it through and…
Keith Witwer: Gentlemen,  Thanks for the…
END_OF_DOCUMENT_TOKEN_TO_BE_REPLACED

Jesus’ protest in the temple

I started writing a little piece on narrative-historical commentaries and how to get by without them and I was going to use the account of Jesus’ action in the temple to illustrate it, but it got too long. So here’s the part on Mark 11:15-19 and parallels. The rest will follow.

The day after his carefully staged entry into the city, having spent the night in Bethany, Jesus returned to Jerusalem and entered the temple. According to Mark, he drove out those who sold and bought, probably in the court of the Gentiles, he overturned the tables of the money-changers and the seats of the pigeon-sellers, and prevented people from carrying anything through the precincts. A brief snippet of his teaching is recorded:

Is it not written, “My house shall be called a house of prayer for all the nations”? But you have made it a den of robbers. (Mk. 11:17)

Matthew omits the reference to stopping people carrying goods and the words “for all the nations” from Jesus’ teaching. Luke’s version is even more succinct:

And he entered the temple and began to drive out those who sold, saying to them, “It is written, ‘My house shall be a house of prayer,’ but you have made it a den of robbers.” (Lk. 19:45–46)

The action is a similar to the entry into Jerusalem on a colt and/or donkey in implicit (Mark and Luke) or explicit (Matthew) fulfilment of Zechariah 9:9. The narrative-historical approach sees Jesus, to a large extent, as an apocalyptic prophet who retells and re-enacts stories and arguments from the scriptures in order to interpret Israel’s current condition and, most importantly, to narrate Israel’s future. Morna Hooker writes:

The evangelists… see Jesus’ actions as much more than a mere gesture of protest: they are to be understood as prophetic actions, symbolizing a divine judgement which will be worked out in future events.1

The cursing of the fruitless fig tree on his way into Jerusalem has the same function (Mk. 11:12-14). Of course, in telling these stories Jesus repeatedly makes himself a central actor: the Son of Man, Zechariah’s humble king, Lord, the coming judge, and so on.

In this respect Jesus is like the “tank man” who defied the military might of the Chinese government in the symbolic heart of communist power. His solitary and courageous protest does not have the sharply defined prophetic force of Jesus’ action, and the man remains anonymous, he is Everyman; he is not putting himself forward as an alternative head-of-state. But the image will for many people evoke powerful, now global, narratives of anti-authoritarian heroism. It leaps from the pages of the tumultuous story of modern China in the same way that Jesus’ action leaps from the pages of the tumultuous story of ancient Israel. 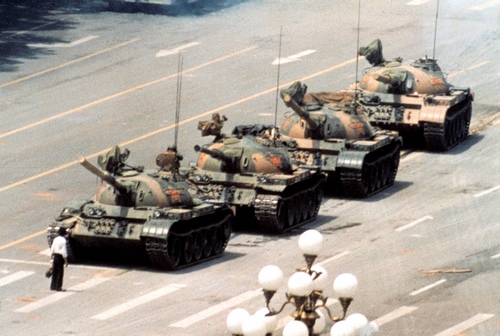 In the brief excerpt from his teaching Jesus yokes together two Old Testament texts, which tell two intersecting stories:

And the foreigners who join themselves to the LORD… these I will bring to my holy mountain, and make them joyful in my house of prayer; their burnt offerings and their sacrifices will be accepted on my altar; for my house shall be called a house of prayer for all peoples.” The Lord GOD, who gathers the outcasts of Israel, declares, “I will gather yet others to him besides those already gathered.” (Is. 56:6–8)

Has this house, which is called by my name, become a den of robbers in your eyes? Behold, I myself have seen it, declares the LORD. Go now to my place that was in Shiloh, where I made my name dwell at first, and see what I did to it because of the evil of my people Israel. And now, because you have done all these things, declares the LORD, and when I spoke to you persistently you did not listen, and when I called you, you did not answer, therefore I will do to the house that is called by my name, and in which you trust, and to the place that I gave to you and to your fathers, as I did to Shiloh. (Jer. 7:11–14)

The first story is one of restoration, but it affirms in particular the inclusion of some Gentiles in the renewal of Israel. Those foreigners who have already joined themselves to YHWH as proselytes, who keep the sabbath and hold fast to the covenant, will not be excluded from the coming salvation of Israel. They will be brought to the temple, their offerings will be accepted, “my house shall be called a house of prayer for all the nations”. Craig Evans suggests that Solomon’s understanding of the temple as a place to which foreigners would come in order to pray, having heard of the reputation of the God of Israel (1 Kgs. 8:41-43) may be in the background.2

The second story is one of judgment. Jeremiah is instructed to stand in the gate of the temple and to warn the “men of Judah” that the mere presence of the temple does not guarantee their security. If they mend their ways, they will be allowed to remain in the land. But if they continue to transgress the commandments, they have in effect made the house of the Lord a “den of robbers”, and they can expect Jerusalem to suffer the same fate as Shiloh. The temple will be destroyed and the people driven from the land. This may suggest that the target of Jesus’ attack is not the priesthood specifically but Israel more generally.

We assume that Jesus expected the “men of Judah” to remember these stories. The meaning of the incident, therefore, is roughly that because Israel has failed to keep the commandments and has gone after other gods, the temple has not brought glory to YHWH amongst the nations, it has not served as a place of prayer for visiting foreigners, therefore, unless Israel has a massive change of heart, it will be destroyed. It is one of the ways in which he brings into sharp focus the story of the coming kingdom of God.

John places the incident at the beginning of Jesus’ ministry. The drama of the event is heightened—Jesus wields a whip as in El Greco’s painting—and the scriptural interpretation is different:

And he told those who sold the pigeons, “Take these things away; do not make my Father’s house a house of trade.” His disciples remembered that it was written, “Zeal for your house will consume me.” (Jn. 2:16–17)

And every pot in Jerusalem and Judah shall be holy to the LORD of hosts, so that all who sacrifice may come and take of them and boil the meat of the sacrifice in them. And there shall no longer be a trader in the house of the LORD of hosts on that day. (Zech. 14:21)

The quotation of Psalm 69:9 in John’s version, however, says more about Jesus than about the temple. David—Israel’s king—has suffered reproach and dishonour, rejection by his own brothers, because he has been consumed by zeal for the Lord’s house. He prays that God will not desert him in his distress but will deliver him from his enemies.

Undoubtedly, these narratives are transposed into a different key as Jesus invokes and retells them, not least because he knows that the salvation of Israel will only be achieved through suffering. But the melody remains more or less the same. Nothing in the account of the temple incident ruptures the essentially Jewish shape of the story that is being told about God and his people.

Love that last paragraph. Thanks for this piece Andrew.

I must be missing something because I am unclear on how this connects to “narrative-historical commentaries and how to get by without them.”  In fact, I would love to have some recommendations for narrative-histocial commentaries so I can see these OT connections more broadly across the NT.

What you’re missing is the next post. This was originally just going to be used to illustrate a couple of point, but it got too big. I’m not sure it will meet your expectations though.

And the foreigners who join themselves to the LORD… these I will bring to my holy mountain, and make them joyful in my house of prayer; their burnt offerings and their sacrifices will be accepted on my altar; for my house shall be called a house of prayer for all peoples

I would say that in view of the narrative history as it actually transpired, this is looking considerably beyond the inclusion of a few gentile proselytes who were beneficiaries of a limited renewal of Israel. The temple was a microcosm of creation, in its internal decorative features and in the parallels between temple dedication and the Genesis 1 creation account. By becoming a house in which all nations were to be invited to participate in the very temple ceremonies themselves, a considerable rupture was anticipated with Israel’s nationalistic but mistaken understanding of her own destiny, and of her own temple.

Did Jesus promise to return within the lifetime of his disciples?
Why did Jesus instruct his disciples not to preach the kingdom of God to Gentiles and Samaritans?
The throne of Jesus and the throne of God
Jamie Davies on the apocalyptic Paul: the J. Louis Martyn school
Why does Jesus give the kingdom back in the end and become subject again to God?

Jamie Davies on the apocalyptic Paul: the J. Louis Martyn school
Jamie Davies on the apocalyptic Paul: from Weiss to Martyn
The narrative vocabulary of rape in the Old Testament and the counter-example of Amnon and Tamar
No one’s blaming Bathsheba
Further notes on David and Bathsheba
Did David rape Bathsheba?
The marginalised servant of the Lord: existence, function, and dysfunction
When prophecy mostly didn’t fail
END_OF_DOCUMENT_TOKEN_TO_BE_REPLACED