Andrew: Thanks, for this, Richard…
Samuel Conner: Just starting into your new…
Richard Blakesley: Hi Andrew, I am thinking…
Andrew: I take the seventh trumpet…
davo: Hi Andrew. Subduing a…
END_OF_DOCUMENT_TOKEN_TO_BE_REPLACED

St Michael kicks the dragon out of heaven

There has been some good discussion of the account of the expulsion of Satan from heaven in Revelation 12:7-12 attached to yesterday’s post about Luke 10:18. If only for my own benefit, I want to try to explain what I think is happening theologically in this passage.

In Jewish thought Satan is a supernatural being who either resides in the heavenly realms or has access to God in heaven. In this passage he is ejected from heaven by Michael and his angels, and as a result heaven and those who dwell in heaven rejoice (Rev. 12:12). They are naturally glad to see the back of him. 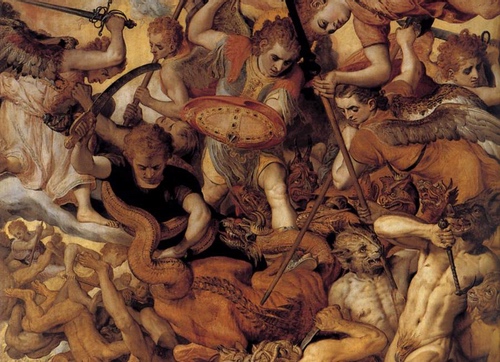 The reason for the expulsion is given in verse 10. In heaven Satan has been accusing the “brothers” day and night before God, in line with his classic Jewish role (cf. Job 1:6–12; 2:1–7; Zech. 3:1–2). These “brothers” appear to be martyrs, because they “loved not their lives even unto death” (Rev. 12:11). Perhaps John has in mind the sort of Jewish misrepresentation or arraignment of Jewish-Christians in synagogues and before civic authorities that we see in Acts. Having been expelled from heaven Satan can no longer do this; he no longer has access to the throne of God.

In the mythological narrative this takes place after the ascension of the male child, who will rule the nations at the right hand of God. There is perhaps a suggestion in verse 10 that the expulsion of Satan is done on the authority of the exalted Christ:

Now the salvation and the power and the kingdom of our God and the authority of his Christ have come, for the accuser of our brothers has been thrown down, who accuses them day and night before our God. (Rev 12:10)

But what is good news for heaven is bad news for the earth and sea, “for the devil has come down to you in great wrath, because he knows that his time is short” (Rev. 12:12). He has a limited time on earth before he is finally defeated by the witness of the saints on earth and bound and cast into the abyss (Rev. 20:1-3). John is very precise about the narrative structure. Satan will use that time to persecute the saints.

He first pursues the woman, probably the community of righteous Israel which believed in Jesus, but she escapes his clutches (12:14-16). So he goes off to make war on the “rest of her offspring”, who “keep the commandments of God and hold to the testimony of Jesus” (12:17). Since we then have the emergence of the beast, to which the dragon gives its authority (13:1-2), and a reference to the “endurance of the saints, those who keep the commandments of God and their faith in Jesus” (14:12), it seems likely that “the rest of her offspring” are the saints in the Greek-Roman world. The call to endurance follows the proclamation of judgment on Rome in Revelation 14:6-11.

The myth, in other words, addresses a legacy of Old Testament thought and provides a transition to the New Testament belief in Satan’s active opposition to the proclamation of the gospel concerning the Son of God in the Greek-Roman context. In the Jewish setting Satan accuses those who appear to be apostates from Judaism before the throne of God in heaven. In the Greek-Roman context he will inspire virulent pagan-imperial opposition to the churches of the oikoumenē.

Clearly we cannot read all this back into Jesus’ saying, but it still seems plausible (I don’t regard it as certain) to suppose that in Luke 10:18-20 a similar narrative is operative: Satan has become a problem for the disciples on earth because he has fallen from heaven. The demons which are subject to the messengers in Jesus’ name are symptomatic of his eschatological presence in Israel. Jesus has given the messengers authority over “all the power of the enemy” precisely because they will have to face the sort of opposition from Satan suggested by Romans 16:20; 1 Peter 5:8-9; James 4:7. By also giving them authority to “tread on serpents and scorpions”, Jesus may be alluding to Psalm 91:11-13, a passage which, coincidentally, is cited by Satan when he challenges Jesus to throw himself down from the pinnacle of the temple (Lk. 4:9-11):

…he will command his angels concerning you to guard you in all your ways. On their hands they will bear you up, lest you strike your foot against a stone. You will tread on the lion and the adder; the young lion and the serpent you will trample underfoot.

Neither the prince of Tyre nor the king of Babylon is Satan
Why did the Jews accuse Jesus of making himself equal to God?
What did Jesus fear in Gethsemane?
Why did Jesus instruct his disciples not to preach the kingdom of God to Gentiles and Samaritans?
The biblical argument about salvation (my soteriology)

Notes on J. Richard Middleton’s The Liberating Image: The Imago Dei in Genesis 1
Our eco-theological blindspots and the climate crisis
Biblical hermeneutics and the destabilising of the world
“Image of God” as eco-theological premise?
A mistake to let them subdue the earth and have dominion over it?
New book coming soon: In the Form of a God: The Pre-existence of the Exalted Christ in Paul
Where is the promise of his coming?
Ten things the church can learn about missions from a narrative-historical perspective
END_OF_DOCUMENT_TOKEN_TO_BE_REPLACED