Gerald: TreeI see the New Heaven as…
Samuel Conner: This is just an…
Helge Seekamp: Here the transcription as…
Helge Seekamp: Now, I worked it through and…
Keith Witwer: Gentlemen,  Thanks for the…
END_OF_DOCUMENT_TOKEN_TO_BE_REPLACED

Why the Lord’s Prayer should be banned in cinemas

The Church of England has been rather taken aback by the refusal of leading cinemas in the UK to screen a video of people, including the Archbishop of Canterbury, reciting the Lord’s Prayer in the run-up to Christmas. The short film, which I find rather moving in its hurried way, is part of a campaign to encourage your average man-or-woman-in-the-cinema to pray. 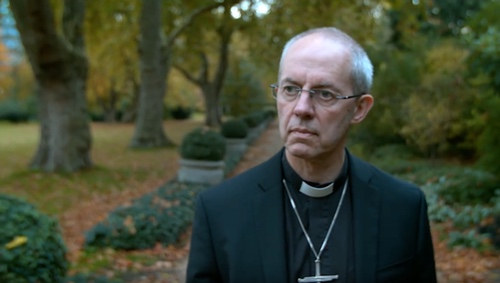 The Church’s director of communications explains that “The prospect of many families attending the release of the new Star Wars film had seemed a good opportunity to launch the advert and a new website justpray.uk to promote prayer ahead of Christmas.”

The agency that manages advertising for Odeon, Vue and Cineworld, however, is concerned that it will offend people of “differing faiths and no faith”.

The Church is vaguely threatening to sue the cinemas on grounds of religious discrimination. Perhaps that’s a reasonable reaction—Ian Paul has some good thoughts on the matter. But I wonder. If Muslims in this country produced a similar video urging people to pray Al-Fatiha or perhaps even proclaim the Shahada, and tried to get it screened in cinemas, I suspect that in the current climate that would be seen as a highly provocative act. Al-Fatiha is the opening surah of the Qu’ran. It’s not quite an equivalent to the Lord’s Prayer but it’s close:

The Shahada is the basic “testimony” of Islam: “There is no god but God. Muhammad is the messenger of God.” It speaks of a radical and uncompromising allegiance.

I’m not trying to make this a matter of religious equality, but the analogy is instructive.

The Archbishop of Canterbury has argued that the advert “is about as offensive as a carol service on Christmas Day”. Even the assistant secretary general of the Muslim Council of Britain has expressed surprise at the decision: “I am flabbergasted that anyone would find this prayer offensive to anybody, including people of no particular religious belief.”

But context is everything. It seems to me that the assumption that the Lord’s Prayer is culturally and religiously innocuous points to some complacency on the part of the church.

It suggests either that we have not let go of the Christendom mentality that expects everyone in this country to be, deep-down, innately, whether-they-like-it-or-not Christian….

Ian Paul quotes Conservative MP Sarah Wollaston: “As a gentle atheist, I’m not offended by Church screening gentle cinema adverts; we shouldn’t reject our deep cultural roots in Christianity.” By that standard an advert for the Lord’s Prayer before watching Star Wars: The Force Awakens is acceptable but an advert for Al-Fatiha would not be.

…or more worryingly, it amounts to little more than an accommodation to the dominant pluralistic but fundamentally secular culture. The Church is proffering for public consumption, along with the popcorn and the diet coke, a comforting devotional template for anyone to take home and use at their convenience, an alternative to the “force” with a better religious pedigree. Dear God, help us to do our bit, provide for our material needs, especially at Christmas, and keep us from excess—or at least from excessive excess. Amen.

Jesus taught his disciples to pray (Matt. 6:9-13; Lk. 11:2-4) that God would judge his people Israel, separate the bad fish from the good, the wheat from weeds, in order that the name of Israel’s God might be “hallowed”—held sacred—by the nations of the ancient world. If it is not a prayer for war exactly, in the background there is certainly the expectation that within a generation Israel would bring a terrible destruction upon its own head, which would be the judgment of the end of the age.

Jesus taught his disciples to pray, further, that God would give them their daily bread during this tumultuous period in the nation’s history, as they pursued their dangerous mission of proclaiming this coming “reign of God” over his people both to Israel and to the nations.

They were to pray that God would forgive them their sins—the mistakes they were bound to make along the way, the moral and spiritual failings that were bound to beset them—as they also forgave their enemies, their persecutors, the Jews and Gentiles who would sin against them.

They were to pray, finally, that God would keep them (as far as possible, let us suppose) from the sort of “testing” of their faith that Jesus himself would face in the garden of Gethsemane.

This was not a prayer for everyone. It was a prayer for communities of people who believed that the resurrection of Jesus was about to change their world, and who were prepared to take the considerable risk of living out that new future in advance.

It is part of a long story that should still galvanise the church for public witness. I’m not sure it should be a prayer for public consumption.

And here I thought this sort of thing only happened in America.

Why did Jesus instruct his disciples not to preach the kingdom of God to Gentiles and Samaritans?
Why does the holy city Jerusalem descend from heaven twice at the end of Revelation?
Why does Jesus give the kingdom back in the end and become subject again to God?
Does Paul say that Jesus is God in Romans 9:5?
James Tabor’s failed failed apocalypse of the New Testament argument

Jamie Davies on the apocalyptic Paul: from Weiss to Martyn
The narrative vocabulary of rape in the Old Testament and the counter-example of Amnon and Tamar
No one’s blaming Bathsheba
Further notes on David and Bathsheba
Did David rape Bathsheba?
The marginalised servant of the Lord: existence, function, and dysfunction
When prophecy mostly didn’t fail
What did it mean to be the “fragrant aroma of Christ”?
END_OF_DOCUMENT_TOKEN_TO_BE_REPLACED