Andrew: See above.
Andrew: I always struggle with this…
Arthur Davis: Thanks for this one, Andrew…
Jo: “In a narrative-historical…
Andrew: Hi Rosemerryn, thanks. Just…
END_OF_DOCUMENT_TOKEN_TO_BE_REPLACED

When prophecy mostly didn’t fail (4 comments)
What did it mean to be the “fragrant aroma of Christ”? (0 comments)
Oops, mustn’t forget it’s Pentecost Sunday this weekend (0 comments)
No, not that undomesticated Jesus, the other one (9 comments)
END_OF_DOCUMENT_TOKEN_TO_BE_REPLACED

Wishing you all a happy and revolutionary Christmas!

According to the tradition that has been passed down to us, Christmas is the time of year when we celebrate God coming to earth in lowly human form to save humankind from sin and death. The glory of the deity has been laid aside, the radiant godhead has been veiled in flesh, the creator of all things has been pleased to dwell as man with man for a while, God-with-us, Immanuel, so that there may be peace on earth, so that God and sinners may be reconciled, so that the sons (and daughters) of earth may experience a second birth and die no more, etc.

That coming is dressed in the robes and regalia of Jewish kingship. The incarnate deity is the newborn king, born in Bethlehem of David’s line. But this is little more than circumstantial detail; the essence of the story is theological rather than political, metaphysical rather than historical. Even O Come, O Come, Emmanuel, perhaps the most Jewish of carols, has in view the dispelling of death’s dark shadows and victory o’er the grave as the final outcome.

In this respect, the tradition is at odds with the stories  that we have in Matthew and Luke.

For Matthew the birth of the Christ marks the climax to a genealogy demarcated by Abraham, David and the exile. The miraculous manner of the conception is a sign that YHWH is once again with his people at a time of national crisis. The boy is called Jesus because he will save his people from their sins. Wise men come from the east to pay homage to a newborn king of the Jews and are directed to Bethlehem, from where “shall come a ruler who will shepherd my people Israel”. He is portrayed as a serious threat to the Herodian dynasty.

The return of the family from Egypt following the death of Herod is understood to “fulfil” the words of Hosea: “When Israel was a child, I loved him, and out of Egypt I called my son.” The “son” Israel had turned away from the father, sacrificing to the Baals and burning offerings to idols, and as a result had come under the brutal rule of Assyria. Matthew signals to his readers that the return of Jesus to the land of Israel marks the beginning of a new telling of this story.

In Luke the story of Jesus’ birth is closely bound up with the story of the birth of John, who will prepare Israel for the coming of the Lord. Jesus will be called “Son of the Most High”, he will be given the throne of David, and he will “reign over the house of Jacob forever, and of his kingdom there will be no end”. For Luke, Jesus’ conception by the Holy Spirit points to his future reign as the Son of the Most High.

Mary celebrates the coming judgment of Israel, when the rich and powerful will be overthrown and cut off and the poor and down-trodden—like wretched Lazarus—will be lifted up and restored to Abraham. Zechariah expects Israel to be saved from its enemies so that it can serve its God without fear.

In a world ruled by Augustus, who is Lord and Saviour, the angels proclaim to shepherds that “unto you is born this day in the city of David, a Saviour, who is Christ the Lord”—a king who eventually will usurp the rule of the divine Caesar over the nations.

Simeon knows that the coming salvation of Israel will reveal to the Gentiles the power of YHWH and will bring glory to Israel in the eyes of the nations. He confirms Mary’s insight that “this child is appointed for the fall and rising of many in Israel”. The prophetess Anna goes off to speak of Jesus to “all who were waiting for the redemption of Jerusalem”. It never occurred to her that the baby was meant to be the saviour of all humanity.

[pq]The church in the West has not been able to sustain the traditional theology—arguably mythology—of Christmas as the universally and permanently meaningful celebration of divine condescension.[/pq]

Clearly Matthew and Luke are not telling a story about God coming to earth from heaven to be born in a lowly cattle shed to redeem us all and finally lead us to the place where he is gone.

Perhaps if we stand far enough back and squint, we can see why the church came to reconceptualize the narrative in such terms. But if we simply read the texts—and why not?—what we have is the account of the birth of a king who would deliver Israel from its desperate situation under the Herods, overthrowing the wealthy and powerful in Jerusalem, and who would reign over the redeemed nation throughout the coming ages.

But what has this manifestly political narrative got to do with us?

The church in the West has not been able to sustain the traditional theology—arguably mythology—of Christmas as the universally and permanently meaningful celebration of divine condescension. Our societies pay a residual and begrudging lip-service to the idea at best. For most of the year the belief is stored away in a battered cardboard box with the other Christmas decorations in the attic of our secular worldview.

I think it may be time to admit that the traditional God-in-a-manger paradigm is defunct.

So let’s consider a different paradigm. Just as America was shaped by the revolution of 1776 (“No Taxation without Representation!”), and the values of modern France were forged in the fires of the revolution of 1789 (Liberté, Égalité, Fraternité!), so the church can trace its distinctive identity back to the revolution signalled in the birth narratives of Matthew and Luke (“We have no king but Jesus!”).

We remember with thanksgiving the liberating trauma of the first century when an old corrupt régime was toppled and a new governance inaugurated. Christmas marks the beginning of that political process.

Such a paradigm shift might also lead us to think that we have become too complacent under the conditions of secular modernity. These old stories of disruption and régime-change may stoke the fires of a new revolt, against our own overlords—the cultural and economic powers that have co-opted Christmas and hold us in thrall. Like Zechariah, Mary, Simeon and Anna we should be disturbed by the desperate, compromised situation of the church under the ruthless Herods of secularism.

So bring on the revolution! Happy Christmas! 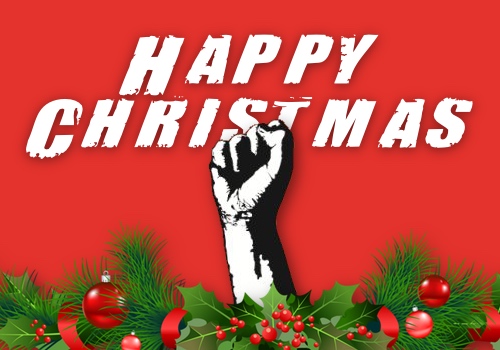 WOW…you do have a way with words. Very powerful Andrew.

This helps one to think about regime-change in the Middle East in a whole new light. And how that revolution could potentially play out in other lands. Wow indeed.

As is always your custom Andrew… thought-provoking words; much appreciated, thank you. May you and yours enjoy this Christmas and have a blessed 2016! :)

Why does Jesus give the kingdom back in the end and become subject again to God?
Who was the man without a wedding garment at the wedding feast?
Can anyone recommend a seminary that embraces narrative theology?
Why did Jesus instruct his disciples not to preach the kingdom of God to Gentiles and Samaritans?
What did Jesus fear in Gethsemane?

When prophecy mostly didn’t fail
What did it mean to be the “fragrant aroma of Christ”?
Oops, mustn’t forget it’s Pentecost Sunday this weekend
No, not that undomesticated Jesus, the other one
What does Luke’s account of Paul’s visit to Athens tell us about how to do “missional church”?
Not sure about the charts: please explain…
Kingdom of God and missional church: not as difficult to define as you might think
Defying history: the future of the church in a Third World Culture
END_OF_DOCUMENT_TOKEN_TO_BE_REPLACED