Keith Wansbrough: Looks good now, thanks. The…
Andrew: Thanks, Keith. It was…
Keith Wansbrough: The chart didn’t appear for…
Juanita: Hi there Sam We spoke…
Andrew: David, many thanks for this…
END_OF_DOCUMENT_TOKEN_TO_BE_REPLACED

Cleanthes’ “Hymn to Zeus” and the renewal of monotheism (3 comments)
Conversation with Mike Bird about In the Form of a God (0 comments)
Answering Mike Bird about the referent of "all things" in 1 Corinthians 8:6 (0 comments)
Interview: The Preexistence of Christ and Narrative Historical Theology (1 comment)
END_OF_DOCUMENT_TOKEN_TO_BE_REPLACED

Yeah, but it didn’t happen: prophecy and historical fulfilment

Matt Colvin offers a well thought out rejoinder to my latest attempt to show that John’s account of the fall of Babylon-the-great refers to Rome. The point he makes is a challenging one: John says that the great city will be thrown down by violence and will be found no more (Rev. 18:21). But Rome was not destroyed: it did not suffer the fate of cities such as Nineveh and Babylon, which Matt says were buried in the sand. So if John was prophesying the catastrophic fall of Rome, it was a false prophecy. Jerusalem, on the other hand, certainly suffered utter destruction, so for the sake of saving the integrity of biblical prophecy, let’s stick to the view that Babylon-the-great is Jerusalem.

I have two things to say in response.

First, I don’t think it’s a good idea to do biblical interpretation in the light of how things turned out. If interpretation of a prophetic text really cannot be resolved, then I guess it’s fair enough to pick the reading that lines up best with the actual course of events. But as far as I can see, the exegetical evidence is firmly in favour of the view that Babylon-the-great is Rome. I have made the further point that such an interpretation is fully consistent with the pattern of judgment on Israel followed by judgment on the foreign city that we find in the Old Testament and Jewish apocalyptic texts. We have, therefore, every reason to expect such a climax to John’s Apocalypse.

So if we read Revelation 18 forwards rather than backwards, without the benefit of hindsight, I think we are bound to accept that John meant to describe the fall of the prostitute-city of Rome, which rode on the back of the beast-like kingdom of Rome.

But, secondly, I think that Preterists who point to the supposed historical failure of the Rome view may have misjudged biblical prophecy. 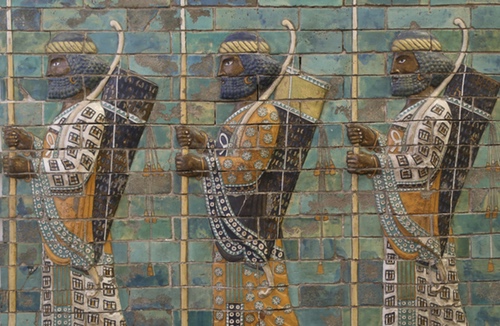 John’s description of the fall of Babylon-the-great draws extensively on the word of the Lord concerning Babylon in Jeremiah 50-51. The themes of a fallen city, a city that made the nations drunk with her wine, sins that reach up to heaven, the command to flee from the city, the repayment of the city for what she has done to others, rejoicing over the fall of a city that had been responsible for the deaths of both Jews and non-Jews, the image of a stone cast down, Babylon sinking to be found no more—all these themes are derived from Jeremiah’s description of God’s judgment against Babylon as repayment for its destruction of Jerusalem. See my previous post for the details.

The agent of this judgment, however, would be the Medes (Jer. 51:11, 28), and we know from history that the Medo-Persian forces did not destroy Babylon utterly. Unable to break down the massive walls, Cyrus cunningly diverted the Euphrates and his soldiers entered the city along the river bed while a national festival was in full swing (Herodotus 1.191). Babylon became the administrative capital of the Persian empire and continued to flourish as a centre for learning and science. It was captured by Alexander the Great in 331 BC and only began to decline a century or so after that. It was still standing in the Byzantine period.

So in a passage that clearly provides an important template for John’s account of the fall of Babylon-the-great, we have a prophecy of utter destruction that was not literally fulfilled. Nebuchadnezzar’s kingdom was brought to an end, but the city merely changed hands. It’s true that eventually Babylon disappeared from history, but Jeremiah’s prophecy is specifically that the Medes would destroy the city. Are we to say that this was also a false prophecy?

John’s account of the fall of Babylon-the-great speaks in the language of repayment. His “Pay her back as she herself has paid back others” (Rev. 18:6) echoes Jeremiah’s “I will repay Babylon and all the inhabitants of Chaldea before your very eyes for all the evil that they have done in Zion, declares the LORD” (Jer. 51:24).

Jerusalem was violently destroyed by the Babylonians, so Jeremiah prophesies judgment in commensurate terms. Jerusalem was or would be violently destroyed by Rome, so John prophesies judgment on Rome in commensurate terms. Neither prophecy was fulfilled according to the letter of the text, but the point is that the hostile régime was overthrown, leading to the fulfilment of YHWH’s purposes—in one case the return of the Jews from exile, and in the other the conversion of the nations of the Greek-Roman world.

As someone who’s still on the fence about the Rome-Jerusalem thing, your point about prophesied “destruction” not always meaning actual destruction is well-taken.

I think of the prophecies against Tyre, for example, where the images of being utterly destroyed and covered in the sea “turned out” to be a siege, some damage of the externals, and treaty. Tyre was destroyed as an independent power and player on the field, although any scheme in which Tyre was actually physically destroyed requires some real gymnastics.

For some preterists, Revelation is an addendum to John’s gospel, providing his own apocalyptic version of the Mark13/Matthew 24 destruction of Jerusalem and the temple. For the futurists, it’s the climax of history itself. I also remain on the fence, not least because it’s a rainy day and I’ve some spare time to kill.

As regards Tyre — I have always been drawn to a literalist interpretation of Ezekiel 26:12, whereby the prophecy at that point moves from Nebuchadnezzar’s partial destruction of the city to Alexander’s siege and destruction (and from the singular ‘he’ of the preceding part of the prophecy, ie Nebuchadnezzar, to the plural ‘they’, which relocates the prophecy to a different time frame implied by ‘many nations’ in verse 3).

Sometimes a literal interpretation of prophecy can be borne out by an actual historical event.

Yes, I’ve read many a literalist defense of the Tyre prophecies, and they all seem a little straw-grabby to me and rely on things like what you pointed out — changing pronouns clearly means a centuries-long shift forward as opposed to just talking about a single antagonist and his armies. I’ve also never really heard a good explanation of why Ezekiel 26:6 makes a distinction between Tyre and her “daughters on the coast,” but Tyre in the prophecy means the coastal suburb and not the actual island fortress city.

But I think the main problem with the literalist view of Ezekiel 26 is that it reduces the scope of what is clearly meant to a huge, world-impacting event to the destruction of some random offshoot of Tyre. It would be like making a prophecy describing how huge it will be when New York is destroyed only to discover that, in reality, Queens was destroyed (no offense to people living in Queens).

I think all the dickering and gymnastics to try to make the details match up with what “really” happened has the effect of neutering the prophecy and making it more about “the accuracy of Bible prophecy” than the message the audience would have received. My $0.02.

Yeah, it is kinda fun.

Correct me if I’m wrong, but I’m pretty sure your argument, over the years, concerning the NT’s eschatological endpoint has rested upon the fact that Scripture declared, in passages such as Romans 2:6-11, a judgment upon the pagan oikoumene which you directly tie to the fall of Rome – in history as an event. You even use that argument against the Preterists’ stance that AD 70 was the NT’s eschatological endpoint sighting in AD 70 there was no historical event to mark a judgment on the oikoumene’s. Now you’re arguing that an event in history doesn’t necessarily have to have happened to fulfill a prophecy?

Paul’s focus, both in Acts (especially Acts 17:30-31) and in his Letters, I think, is not on Rome (with the exception of 2 Thess. 2?) so much as on the idolatrous culture and its ethical ramifications (cf. Rom. 1:18-32). Revelation, however, has Rome as an aggressive, persecuting political-religious force in view—both as kingdom and as city.

So yes, both judgment on Israel in the form of the Jewish War and judgment on the idolatrous, blasphemous culture and empire that had defied YHWH for so long.

Or at least, if we are going to claim that the non-destruction of the city of Rome is an argument in favour of the Babylon=Jerusalem view, then we have also to accuse Jeremiah of false prophecy.

Thanks for the clarification.

I think we agree on much.  I agree with the dual judgment; on Israel first and then the Greek. It seems to me the only real difference (on this topic) is Revelation and certain identities within it.  For me if you wish to see prophecy on the demise of Rome you need to see Daniel 7:12.  While it was judged (dominion taken away in AD 70 alongside Israel’s destruction) its life was prolonged for a while longer.   Seems it was a few hundred years.

While I disagree with what you’ve argued, I am grateful for the information you have provided.  Always good to hear other points of view and their arguments for them.

So, you do believe that the Babylonian empire still ruining represented by the roman Catholic Church? I mean, is possible that the popes took the place of the Caesars?

Daniel did say something about the fourth Kingdom. We all know that this fourth kingdom is the Roman, which would be different from all previous kingdoms. Is it possible that this kingdom has not yet ended? Nothing was said about a fifth kingdom, we only know that some horns of the animal seen by Daniel have spawned other horns. Could be that the reason why Babylon has not fallen yet?

Thanks for the opportunity

But I do think i) that the church was expected to have a role as a priesthood mediating between God and the nations as political entities; and ii) that the church was always going to be imperfect. This means that the corruption of the political-religious arrangement that constituted Christendom should not come as a surprise. But it is not part of the prophetic narrative.

Cleanthes’ “Hymn to Zeus” and the renewal of monotheism
Conversation with Mike Bird about In the Form of a God
Answering Mike Bird about the referent of "all things" in 1 Corinthians 8:6
Interview: The Preexistence of Christ and Narrative Historical Theology
How we got from kingdom to Trinity: Constantine and pagan monotheism
Jesus and Paul, works and faith
Some hazardous thoughts on the Trinity for a new year and a new era
Was it Roman custom for people to return to their home town for a census?
END_OF_DOCUMENT_TOKEN_TO_BE_REPLACED