The two modes of “mission” (for want of a better word) in the Bible (0 comments)
A new course: Understanding and Practising “Missional Church” (7 comments)
What Jesus has to teach us about our response to the climate crisis (0 comments)
The Apocalyptic Symbolism of Mark 8:38 and (not) the Final Reign of God (1 comment)
END_OF_DOCUMENT_TOKEN_TO_BE_REPLACED

The flood, Sodom, and the end of the world

In The Historical Christ and the Theological Jesus Dale Allison argues for an apocalyptic Jesus—that is, for a Jesus whose mind was resolutely set on a cataclysmic and transformative event in a not-too-distant future. He thinks that the “shared hypothesis of Weiss and Schweitzer is not just tenable but compelling”. The argument is right, and I am firmly of the view that an evangelical reading of the Synoptic Gospels has to recover the apocalyptic dimension. The question, however, is what sort of impending cataclysmic and transformative event Jesus had in mind.

Like many scholars, Allison thinks that Jesus expected a final cosmic transformation:

he envisaged, as did many in his time and place, the advent, after suffering and persecution, of a great judgment, and after that a supernatural utopia, the kingdom of God, inhabited by the dead come back to life, to enjoy a world forever rid of evil and wholly ruled by God. Further, he thought that the night was far gone, the day at hand. (95)

Allison lists a great number of passages to support this argument. If this was what Jesus thought, then of course Jesus got it wrong.1

My view has been that Jesus was speaking, in characteristic prophetic-apocalyptic fashion, of a historical transformation: the destruction of Jerusalem and the temple, the vindication of the messengers of the kingdom whom he would send out, and the inauguration of a new age, a “regeneration”, when the twelve disciples would sit enthroned beside the Son of Man, “judging the twelve tribes of Israel” (Matt. 19:28). If this was what Jesus thought, then, as it turned out, he was right.

No one knows that day or hour

One of the passages that Allison presents as evidence for his contention that Jesus expected an absolute and final transformation of the world is Matthew 24:36-44 and the roughly parallel Luke 17:26-35. The sayings about one being taken and the other left he takes to mean that “the final judgment coincides with a supernatural sorting”. In Jewish and Christian literature Noah’s flood and the destruction of Sodom are supposedly “popular prototypes of the last judgment and end of the world”.

The passage in Matthew is addressed to the disciples and is a continuation of an argument about the timing of the coming of the Son of Man and the deliverance of the disciples. Just as the emergence of leaves on a fig tree means that summer is near, so when they “see all these things”, they will know that he or it is near, at the gates. In any case, it will happen before the current generation of Israel passes away.

Jesus professes (admits? feigns?) ignorance of the precise timing of “that day and hour”. The story of the flood is introduced to make the point that the parousia of the Son of Man will catch people by surprise in the midst of eating, drinking, marrying, and giving their children in marriage. The sayings about the two men and two women, busying themselves with their normal occupations, one of whom is taken, the other left, are enigmatic, but the only point that they make in the passage is that the coming of the Son of Man will be unpredictable. I’ll look at this difficult verse in a separate post.

The paragraph then concludes with the warning to the disciples, “stay awake, for you do not know on what day your Lord is coming”. If the owner of a house knew when the thief would come, he would wait up and prevent the burglary. Likewise, the disciples “must be ready, for the Son of Man is coming at an hour you do not expect”. The following three parables (two servants, ten virgins, eight talents) make more or less the same point.

Luke’s version reads a little differently, but the question of timing is still in the foreground. A day is coming when the disciples will yearn to see the Son of Man coming, but they will not seem him and must be careful not to be misled into thinking that the Messiah is here or there. In other words, Jesus is urging patience and steadfastness. People will be surprised by the sudden appearance of the Son of Man as they were when the flood came or when Sodom was destroyed. A man on the top of his house should not waste time trying to retrieve his possessions, a person in the field should not turn back. “Remember Lot’s wife!” In that night, one will be taken from a bed, the other left; one woman will be taken from the mill, the other left. Then we have the parable of the persistent widow, reinforcing the point that the controlling theme is the difficult wait for vindication:

And will not God give justice to his elect, who cry to him day and night? Will he delay long over them? I tell you, he will give justice to them speedily. Nevertheless, when the Son of Man comes, will he find faith on earth? (Lk. 18:7–8)

Noah and the flood

In Constructing Jesus Allison lists a number of texts in support of the claim that in Jewish and Christian writings the flood and the destruction of Sodom were types of a final judgment.

A number of the flood texts, however, appear to be merely descriptive of the primal event, making no reference to a future and final cataclysm (Sir. 16:7; 3 Macc. 2:4; Jos. Ant. 1:72-76; Apoc. Adam 3:3). Others are too late to be of much use. Pseudo-Philo (early 2nd century AD?) says that “when the years of the world shall be fulfilled”, there will be a resurrection and final judgment, when God will “render unto every man according to his works and according to the fruit of their imaginations”. But in the meantime he will not destroy the earth with a flood again, but will “judge them by famine or by the sword or by fire or by pestilence, and there shall be earthquakes…” (Ps.-Philo, Bib. Ant. 3:9-10), which, if anything, lends weight to the view that Jesus was speaking of the destruction of Jerusalem. 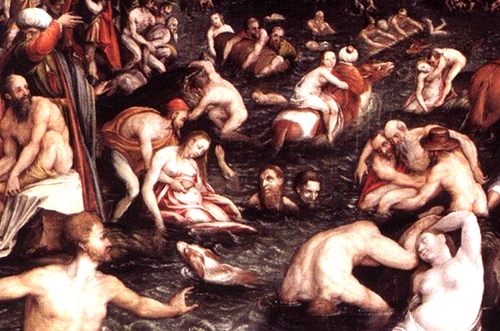 Isaiah alludes to the flood (“the windows of heaven are opened”) in an oracle of judgment concerning a day when “the LORD will punish the host of heaven, in heaven, and the kings of the earth, on the earth” (Is. 24:21). But he also uses the story as a metaphor for the forgiveness of Israel: “This is like the days of Noah to me: as I swore that the waters of Noah should no more go over the earth, so I have sworn that I will not be angry with you, and will not rebuke you” (Is. 54:9). This at least allows the possibility that Jesus is thinking: as it was with the flood, so it will be with Jerusalem.

Of more significance for Allison’s thesis is the Enoch literature.

Enoch tells the story of the flood and the destruction of the fallen angels as a parable for a remote future generation (1 En. 10). Injustice will be destroyed and the earth will be cleansed; “all the children of men shall become righteous, and all nations shall offer adoration and shall praise Me, and all shall worship Me” (1 En. 10:21). In the Apocalypse of Weeks the flood is spoken of as a “first end” (1 En. 93:4); it is not clear what the “second end” would be, if there is to be one, though in a “righteous judgment” in the ninth week “All the deeds of the sinners shall depart from upon the whole earth, and be written off for eternal destruction; and all people shall direct their sight to the path of uprightness” (1 En. 91:14; cf. 2 En. J 70:10).

But there are some important differences between these texts and Jesus’ sayings. On the one hand, the Enoch literature presents a sophisticated universal apocalyptic framework without the focus on the destruction of Jerusalem which is central to Jesus’ teaching. On the other, Jesus makes reference to the flood not in order to argue for a final judgment but to explain what the coming judgment will be like. He deploys the typology for a very different purpose.

The destruction of Sodom

So it seems to me that Allison greatly overstates the force of the background material. We are not bound to conclude that by comparing the coming of the Son of Man with the flood and the destruction of Sodom Jesus meant to express his conviction that the whole world was about to be destroyed, within a generation.

His concern is rather that the disciples should not be taken by surprise and so be disqualified. They are to attend to the needs of the master’s household; they are to be ready for the arrival of the bridegroom; they should diligently invest the money that has been entrusted to them (Matt. 24:45-25:30). If they faithfully do these things, they will be given great responsibility in the coming age, when the Son of Man will rule over his people as king. The return of the bridegroom or master of the house will mark a historical climax and transition of great theological significance, but Jesus seems to be at pains to highlight the ordinariness of the events. The focus is on the continuity of the disciple’s experience:

Blessed is that servant whom his master will find so doing when he comes. Truly, I say to you, he will set him over all his possessions. (Matt. 24:46–47)

The two modes of “mission” (for want of a better word) in the Bible
A new course: Understanding and Practising “Missional Church”
What Jesus has to teach us about our response to the climate crisis
The Apocalyptic Symbolism of Mark 8:38 and (not) the Final Reign of God
Societal collapse, deep adaptation, and an agenda for mission
Multifaith Matters podcast: my conversation with missiologist Michael Cooper about the narrative-historical method
What is the essence of Christianity?
How does the New Testament predict the future?
END_OF_DOCUMENT_TOKEN_TO_BE_REPLACED