Juanita: Hi there Sam We spoke…
Andrew: David, many thanks for this…
David: And, for further reading, I…
David: There’s a substance to this…
Arthur Davis: That, I think, is the…
END_OF_DOCUMENT_TOKEN_TO_BE_REPLACED

Conversation with Mike Bird about In the Form of a God (0 comments)
Answering Mike Bird about the referent of "all things" in 1 Corinthians 8:6 (0 comments)
Interview: The Preexistence of Christ and Narrative Historical Theology (1 comment)
How we got from kingdom to Trinity: Constantine and pagan monotheism (2 comments)
END_OF_DOCUMENT_TOKEN_TO_BE_REPLACED

Heaven and the apocalyptic narrative

Paula Gooder talked about heaven at a Theos event last night in London, with passion, verve, an impressive grasp of the details (the gentleman behind me was certainly impressed), and a robust determination not to let theological tradition get in the way of honest biblical interpretation.

Her leading argument was that in the modern era the concept of heaven has been privatised, spiritualised and postponed. All that most people are interested in—if they’re interested at all—is whether they will go to heaven when they die and what it will be like when they get there. Gooder insisted that these are not biblical concerns. The New Testament has very little to say about people going to heaven when they die. In scripture heaven is the place where God dwells. It is a created space above the firmament, no more remote from the earth than it needs to be. It can be visited by people: Paul at least entertained the possibility that he, or somone known to him, had been caught up bodily to the third heaven (2 Cor. 12:2). 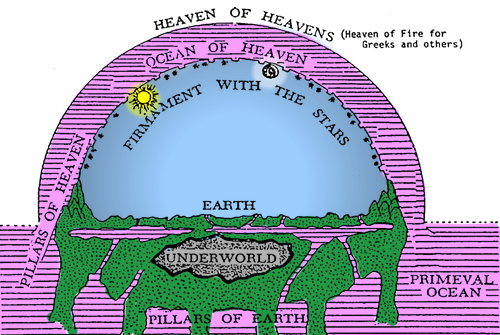 So the talk was about cosmology rather than personal eschatology. If you’re interested, get hold of a copy of her very readable book Heaven. I enjoyed it greatly and agreed with most of it. But I felt something was missing.

My critique—if that’s not too strong a word—is that the talk was strong on the Hebrew cosmological architecture of the biblical worldview but not so strong on the Jewish apocalyptic narrative, without which, as I see it, we cannot make good sense of “going to heaven” in the New Testament. I think it is right, biblically speaking, to resist the popular notion that Christians—or any other deserving group of people and their pets—go to heaven when they die. But that does not mean we should avoid eschatology altogether in talking about heaven. The critique, of course, applies more widely. It is encouraging that evangelical theology is slowly getting to grips with the “Jewishness” of the New Testament, but I think it still has some way to go. So I want to make a case for finding the significance of heaven in the New Testament in the apocalyptic narrative or narratives.

The apocalyptic narrative about heaven

In response to a question, as I recall, Gooder said that she thought that the New Testament contains a variety of views on what happens after death—for example, sleeping in the dust of the earth; the sort of judgment described in Matthew 25:31-46; the contrasting fates of the rich man and Lazarus; the martyrs seen under the altar who are raised to reign with Christ (Rev. 6:9; 20:4); or Paul’s expressed desire to die and be with Christ.

My argument would be that what looks like a rather chaotic diversity from a dogmatic or systematic point of view, is entirely coherent when considered narratively. So here’s roughly how I think it works…

1. Gooder noted last night that the idea of resurrection from death—as opposed to descent into Sheol or Hades—only really appears in Daniel 12:2-3 in the Old Testament. We could quibble about a couple of other texts, but I’m inclined to go long with that. Daniel’s vision, however, is limited in scope. It is only some of Israel’s dead who are raised at the time of a great historical crisis, some to everlasting life, others to everlasting shame and contempt. They do not appear to go to heaven; they participate in the ongoing historical life of Israel. I imagine that this idea lies behind the peculiar story of the resurrection of the saints from their tombs at the time of Jesus’ death (Matt. 27:52-53).

2. There is no resurrection in the story of the rich man and Lazarus. It draws on a different, perhaps non-Jewish, conceptuality in order to make, I think, a parabolic point about who in Israel will be included and who will be excluded when God judges his people. The parable of the wheat and the tares (Matt. 13:24-30), which oddly came up last night, presupposes the same context: this is a judgment of living Israel at the end of the age of second temple Judaism. The clue is in the quotation of Isaiah 6:9-10 earlier in the chapter.

3. Jesus is raised from the dead to be new creation as vindication of his faithfulness, as we like to say these days. There is nowhere for a new creation body to go currently, so he ascends to heaven. But this vindication consists not in life only but in lordship and kingdom. Jesus is exalted to the right hand of God to judge and rule over Israel and the nations—an idea sponsored especially by Psalms 2 and 110 and Daniel 7:13-27, the influence of which is widespread in the New Testament.

4. The New Testament churches have been called to participate in Christ’s suffering and vindication in a quite realistic fashion, so those who are martyred, and perhaps those who just die during this period of eschatological transition from the current age of second temple Judaism to the age of Jesus’ rule over the nations, can expect to be raised-with-Christ to share in his reign.

This whole kingdom argument is missing from Gooder’s account of heaven, but it seems to me that it is the only reason people end up going to heaven at all: Jesus and the martyrs die and go to heaven for the sake of God’s future rule over Israel and the nations.

5. This vindication of the suffering church will happen at the parousia, which I take to be—from the perspective of the churches in the pagan world—the moment when Jesus is publicly confessed as Lord by the nations of the Greek-Roman world. It’s a contentious point, I admit, but I think that’s where a consistently historical reading of the New Testament takes us, sooner or later.

6. When the new king comes to be welcomed by his citizens (this is what a parousia is), the living will go out to meet him, but if the dead are not to miss out on this glory, they must first be raised (cf. 1 Thess. 4:15-17). In effect, this is Daniel’s vision again, though without the resurrection of the unrighteous. The righteous dead—the dead in Christ—are raised to share in the life of the age to come. But Jesus’ resurrection and ascension have opened up a new outcome, unimagined by Daniel: rather than participate in the continuing historical life of the people of God the resurrected dead will reign with Christ in heaven until the end of his reign and the beginning of a new creation (1 Cor. 15:24-28; Rev. 20:4-6).

7. When the king comes in his glory, he will not only deliver and reward his servants; he will judge the nations. Jesus’ judgment of the sheep and goats connects this in a quite specific way with the end of the mission of the disciples (Matt. 25:31-46). Elsewhere in the New Testament it is conceived more broadly (eg. Acts 17:30-31). This whole kingdom argument is missing from Gooder’s account of heaven, but it seems to me that it is the only reason people end up going to heaven at all: Jesus and the martyrs die and go to heaven for the sake of God’s future rule over Israel and the nations—the kingdom of God.

8. Until the parousia the dead-in-Christ “sleep” in the earth or in their graves. The rest of the dead likewise are merely dead until a “second” or final resurrection for judgment (Rev. 20:5, 11-15).

The talk was entitled “‘Pie in the Sky when you die’? Heaven, the Bible & Public Theology”. The idea was mooted that it might be interesting to write our own Book of Revelation as a way of expressing the public relevance of heaven today.

I like that idea—I think that we need not only to read the Bible narratively but also to learn to narrate our own experience and quandary as God’s people after Christendom. But that said, we are already located in John’s very public and political apocalyptic narrative. Gooder argued, in fact, that the book is a vision of Jerusalem in a state of disintegration and of Rome in a state of disintegration. But after the climactic judgment on decadent Rome and the overthrow of the beast-like kingdom in chapters 18 and 19, the martyrs are raised to reign with Christ in heaven throughout the ensuing thousand years until the final judgment. So the undifferentiated, unexamined thousand years is simply the rest of history once the supreme political-religious opponent of YHWH and his Christ, from John’s first century perspective, has been defeated. You’ll find us in there somewhere.

John has no inkling of what will happen to God’s people “politically” during that period—he sees no Great Schism, no Reformation, no Enlightenment, no triumph of Godless Secularism. But the basic shape of the political existence of God’s people in the world has been determined: we are ruled over by Christ, who is our heavenly king; we tell a long Jewish story about how this came about; and we go about our calling to be a new creation people, in the power of the transforming Spirit of God, with the eschatological hope that the creator will finally get the better of the last enemies and make all things new. In this regard, the Bible gives us not just a cosmological or ethical basis for a “public theology” but an apocalyptic basis for thinking of our place in the midst of the nations and cultures of this world.

So John the Seer had the last word and all there is to do now is become familiar with the ancient narratives and, in the absence of divine revelation, create our own meaningful narrative?

This seems so depressing and so sure to fail…

It seems the church, in spite of the transforming Spirit of God, has simply become more confused and the organized church continues to become more and more fragmented and irrelevant.

Conversation with Mike Bird about In the Form of a God
Answering Mike Bird about the referent of "all things" in 1 Corinthians 8:6
Interview: The Preexistence of Christ and Narrative Historical Theology
How we got from kingdom to Trinity: Constantine and pagan monotheism
Jesus and Paul, works and faith
Some hazardous thoughts on the Trinity for a new year and a new era
Was it Roman custom for people to return to their home town for a census?
A Hindu asks a very good question about the death of Jesus and the salvation of Gentiles
END_OF_DOCUMENT_TOKEN_TO_BE_REPLACED