Cleanthes’ “Hymn to Zeus” and the renewal of monotheism (4 comments)
Conversation with Mike Bird about In the Form of a God (0 comments)
Answering Mike Bird about the referent of "all things" in 1 Corinthians 8:6 (0 comments)
Interview: The Preexistence of Christ and Narrative Historical Theology (1 comment)
END_OF_DOCUMENT_TOKEN_TO_BE_REPLACED

How (and why) church planters should tell their story

I’ve been preparing some material for a workshop on Theology and Future Church for a group of church planters, and as often happens, my mind ran off in a rather impractical direction. But the point is this. Too often practitioners look for a theology that will directly support or enhance or defend their practice—or discredit the practice of their opponents. What are we supposed to think about gay marriage? Do Muslims and Christians worship the same God? How do we resolve the tension between evangelism and social action? And so on…. We have issues, pressing issues, and that’s where we want to start.

But that’s not what the New Testament is for. Not primarily. If at all. It’s not a reference book for twenty-first century missional praxis. It has no idea what life is like in the twenty-first century. It knows nothing about homosexual fidelity, Islam, or the ideological split between gospel and justice. It tells the story of how the people of God were transformed through the faithfulness of Jesus and how that transformation changed the ancient world. I think that New Testament studies at the moment is doing a marvellous job of helping us to understand the power of that story—and in a way that may be profoundly, though unconventionally, evangelical.

So the theoretical thoughts are that:

1. leaders and practitioners in church and mission should be asking harder questions about the implications of current developments in biblical studies for their work—and scholars should be doing more to help them;

2. we need to be more aware of our historical—even eschatological—context;

3. the story all the way through, and into the future, is the political-religious one of God’s people and the nations,  without which church and mission are cut adrift from their explanatory moorings.

What follows are some sketchy notes on the second and third of these assertions. My basic point will be that in order to do mission well for the sake of the future of the church in the West we will have to learn to tell our story better. It’s worth noting, however, that Europeans have a much stronger sense of continuity, happily or unhappily, with their Christian past than other Western cultures. We do not all have the same story to tell.

At the start, the apostles told the story about Jesus and Israel to the pagan nations, and increasing numbers of Gentiles believed it. The Church Fathers used rationalist—largely Platonist and neo-Platonist—tools to contruct a new worldview for European Christendom out of the biblical material. They had no choice. After the Enlightenment this comprehensive Christian worldview began to disintegrate under intense pressure from critical reason. The theological community was subsequently split between those who, by and large, accepted rational-critical methodologies and those who preferred to defend orthodoxy. 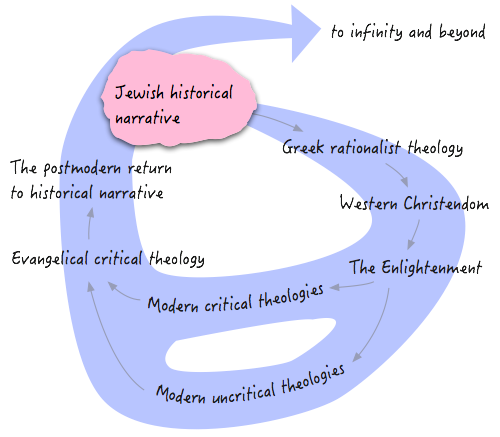 The division certainly has not been overcome, but over the last fifty years, say, a viable critical evangelical theology has emerged. I hesitate to say this, but I think that we have gone some way towards overcoming Lessing’s “ugly broad ditch” between history and faith. In any case, that’s the challenge that faces us.

More recently, for all sorts of complex reasons, this more robust evangelical theology has entered a trajectory that is taking it back towards an appreciation of what I would term the narrative-historical shape of New Testament thought. We are beginning to see not only that Jesus brought the story of Israel to some sort of climax but also that it was the proclamation of this Jewish story in the pagan world that generated the story of the church. So theology has come full circle. The interesting question is where this accelerating trajectory will take us next. You get the picture.

The return is not just to narrative. It is to the story of Israel as a historical community. Theology has always had a narrative structure. I suggest that we can identify three different types of narrrative that have dominated the history of theology. 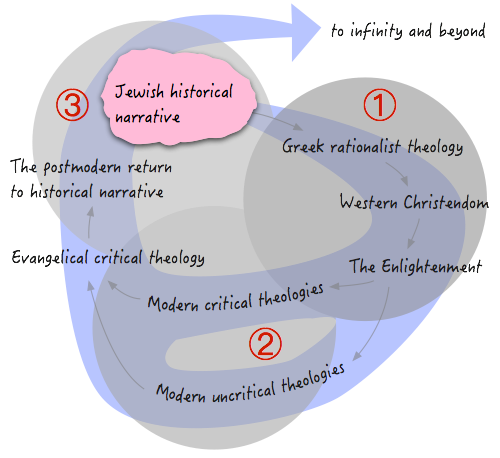 1. The Christendom worldview had a macro-narrative shape: creation and fall → incarnation and redemption → final judgment. People simply lived and died within this story. Systematic theology was the theoretical examination and development of this all-encompassing worldview-narrative. In particular it endeavoured to explain how the “Christ event” functioned—the relationship between Jesus and God, on the one hand, and the nature of atonement, on the other.

2. After the Enlightenment, modern scientific rationalism discredited the macro-narrative, leaving us with the micro-narrative of personal salvation: I’m a sinner → Jesus died for my sins → therefore I will go to heaven when I die. The church has found it difficult to sustain even this privatised storyline and numbers have continued to decline, despite our best attempts to re-evangelise the West.

3. Sandwiched between the macro-narrative that defined the Christendom worldview and the micro-narrative of personal salvation is the medio-narrative of the people of God struggling to maintain identity, integrity and purpose in the midst of the nations through history.

This story presupposes at every point the biblical argument about God and creation, and it obviously has implications for the individuals involved. But it is essentially a political or political-religious narrative, and my argument has been that most of the theological content of the New Testament has to be interpreted at this corporate-historical level. We need to disengage from the obsessive individualism of modern consumer culture before we can work out what to do with this new perspective.

Finally, I would suggest that theology—New Testament studies in particular—is making available the tools and resources that will enable not only a better understanding of the New Testament but also a better appreciation for our own post-Christendom, medio-narrative circumstances. In the long run, I think this will be invaluable for mission. But it could be a very long run.

If we project from this narrative, would we put ourselves in the mindset of Israel’s prophets and begin warning the people in our various nations to repent and follow Yahweh to avoid his judgment, which could very well involve being overrun by a foreign nation?

On a related note, I also wonder if an ungodly nation had a godly leader, would Yahweh hold off on his judgement since that seems to be a factor throughout the OT?

Israel’s prophets spoke first to Israel and to a large extent the message to the nations arose from that: God was about to judge and restore his people; this would have consequences for the nations.

But now, for the church in the secular west at least, it is not the nations primarily that are likely to be the target of a prophetic message (Canada, Britain, Sweden, etc.), but a global secular culture. That seems to me to be part of what it means to be post-Christendom. It’s not imperialism or nationalism that threatens is hostile to the creator God and his people but rational secularism.

Personally, I think we ought to be able to articulate a historically contextualised prophetic message for the church that can be seen to have profound consequences for our cultural matrix.

Andrew, when you say, “for the church in the secular west at least, it is not the nations primarily that are likely to be the target of a prophetic message (Canada, Britain, Sweden, etc.), but a global secular culture,” it seems you are implying that as we craft a message, it should not just be a message for the nation in which we live, but for the world.

Do you think God no longer deals with nations as entities, causing their rise and fall? If so, what is your rationale for thinking this?

Also, when you use the word “prophetic,” do you mean that the church’s message should speak of certain future judgment—based on Biblical prophesies and their fulfillment? (From your last paragraph, I’m assuming you don’t mean “prophetic” in the sense that God will reveal new information about upcoming events.)

Cleanthes’ “Hymn to Zeus” and the renewal of monotheism
Conversation with Mike Bird about In the Form of a God
Answering Mike Bird about the referent of "all things" in 1 Corinthians 8:6
Interview: The Preexistence of Christ and Narrative Historical Theology
How we got from kingdom to Trinity: Constantine and pagan monotheism
Jesus and Paul, works and faith
Some hazardous thoughts on the Trinity for a new year and a new era
Was it Roman custom for people to return to their home town for a census?
END_OF_DOCUMENT_TOKEN_TO_BE_REPLACED