Samuel Conner: Thank you, Andrew; this is…
peter wilkinson: You are so right. How did I…
Andrew: Ah, so not Christianity…
peter wilkinson: https://www.christiantoday…
Andrew: Very good. Do you have a…
END_OF_DOCUMENT_TOKEN_TO_BE_REPLACED

The Apocalyptic Symbolism of Mark 8:38 and (not) the Final Reign of God (1 comment)
Societal collapse, deep adaptation, and an agenda for mission (8 comments)
Multifaith Matters podcast: my conversation with missiologist Michael Cooper about the narrative-historical method (1 comment)
What is the essence of Christianity? (9 comments)
END_OF_DOCUMENT_TOKEN_TO_BE_REPLACED

Is the “eternal generation of the Son” a biblical idea?

As much out of morbid curiosity as anything, I have been following the intra-Reformed debate over the eternal subordination of the Son rather closely. Posts, counter-posts and counter-counter-posts from some hard-hitting theologians have been proliferating at a great rate. For no very good reason—this is not a topic I would normally have much time for—I have been keeping a list of contributions here. The tally is currently 23, but it certainly is not exhaustive and may well go up. I get the impression that the non-subordinationists are coming out on top, but that may be because I am relying too heavily on Scot McKnight’s updates.

Here is how I understand the basic structure of the controversy:

The question has also arisen, however, whether the doctrine of “eternal generation” is really satisfactory. On the one hand, we may wonder if it doesn’t already imply the thought of subordination? On the other, we may ask whether it can claim to be biblical?

Fred Sanders has put forward 18 informal theses on the Father and the Son. In the first five, he argues that i) we know that God is three persons because the Father sent the Son and the Holy Spirit; ii) the Father-Son-Spirit relation pre-exists the sending, hence an eternal Trinity; iii) the sending of the Son “reveals an eternal relation of fromness”; and iv) this “eternal relation of fromness” or “eternal generation” is a biblical doctrine:

There’s no reason to believe this kind of thing about God unless it is revealed in his mighty acts and his self-testimony. It is not directly stated in scripture in these words, any more than a “Trinity” of “persons” is, but many lines of biblical evidence converge on this judgment about the relation of Father to Son and Spirit. Perhaps it has been too long since we have seen a vigorous presentation of this doctrine from scripture alone.

Notice, again, that this is a top-down or deductive argument, if only procedurally: we start with the theological premise, run through a bit of theological reasoning, and then ask whether it’s biblical or not.

What is it, then, that He says, “has given to the Son to have life in Himself”? I would say it briefly, He begot the Son. For it is not that He existed without life, and received life, but He is life by being begotten. The Father is life not by being begotten; the Son is life by being begotten. The Father is of no father; the Son is of God the Father. The Father in His being is of none, but in that He is Father, ’tis because of the Son. But the Son also, in that He is Son, ’tis because of the Father: in His being, He is of the Father. This He said, therefore: “has given life to the Son, that He might have it in Himself. Just as if He were to say, The Father, who is life in Himself, begot the Son, who should be life in Himself”. Indeed, He would have this dedit (has given) to be understood for the same thing as genuit (has begotten). (Tractates on the Gospel of John 19.13)

Keith Johnson takes up the argument (“What Would Augustine Say to Evangelicals Who Reject the Eternal Generation of the Son?”), throwing in Carson’s exegesis of the verse for good measure:

But I’m not convinced that John 5:19-29 supports this line of reasoning.

Jesus claims to do nothing “from himself” (aph’ heautou) but only what the Father shows him. The Father will show him “greater works than these” so that the Jews would marvel, by which he means the resurrection: the Father will raise the dead; the Son will “see” this work and do the same: “so also the Son gives life to whom he will”. The image is of the Son observing the Father and imitating his actions.

The Father has given judgment to the Son because he is the Son of Man, but the person who believes in Jesus “does not come into judgment but has passed from death to life”. The dead will hear the voice of the Son of God and will live, because the Father has granted to the Son to have “life in himself (en heautou)”. So, finally, an hour is coming “when all who are in the tombs will hear his voice and come out, those who have done good to the resurrection of life, and those who have done evil to the resurrection of judgment”. 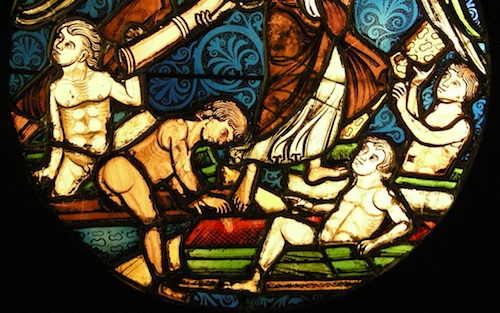 The allusion to Daniel 12:2 is clear: “And many of those who sleep in the dust of the earth shall awake, some to everlasting life, and some to shame and everlasting contempt.” Jesus’ claim is that the power to raise at least those in the tombs who hear is voice has been given to him because his is the Son of Man. The point probably cannot be pressed as vigorously as in the Synoptic Gospels, but there is still the basic idea that Jesus is the Son of Man who suffers, who is vindicated, and who is given authority to judge and rule. The statement about having “life in himself” need mean no more than that the life he will give to those in the tombs who hear his voice is the life that he will receive in his own resurrection.

It is very difficult to see any thought of generation here or even anything that might entail it under different theological conditions. Augustine’s rewriting of “has given” as “has begotten” is gratuitous. Yes, if the verse is disconnected from the narrative and vindication and resurrection, it becomes possible to imagine that Jesus was talking about a manner of life intrinsic to the eternal Godhead. And then, since granting-to-have-life-in-himself amongst the equal persons of the Trinity seems illogical, we might think that eternally begetting makes better sense of Jesus’ words.

I will venture to say that it is unreasonable to expect scripture to provide support for a doctrine that was devised by the early church to solve a metaphysical problem of its own making.

But in context this is the life of the resurrection. The ultimate source of this life is the Father, but the Son has been granted to have this life because he must suffer as the Son of Man and be raised from the dead in order, on the one hand, to exercise judgment, and on the other, to raise the righteous from their tombs. John’s christology appears at this point, at least, to be underpinned by the same apocalyptic narrative that we find elsewhere in the New Testament.

Jesus is not raised because of any intrinsic life that he had “in himself”. He is raised as a new creation, from the dead, by the power of the Holy Spirit (cf. 1 Cor. 15:45; Rom. 1:4). The Romans passage highlights the connection between divine sonship and the resurrection.

This, of course, is just one passage, though seemingly an important one for the argument. Others might be considered. But I will venture to say here that it is unreasonable to expect scripture to provide support for a doctrine that was devised by the early church to solve a metaphysical problem of its own making.

Theologians are fully entitled to defend the reasoning of the church fathers as they endeavoured to make constructive sense of the biblical narrative apart from its Jewish presuppositions. But history goes forwards, not backwards. I do not think theologians are entitled to retrofit their worldview on scripture under the guise of an epistemologically privileged Trinitarian hermeneutic. That is sheer hubris. Or something close to it.

That treatment of John 5:26 makes me think of how Matthew 1:23 is sometimes used as a proof text for the Incarnation. Sure, isolated from any larger narrative and assuming the Bible is up for answering the question, “Is Jesus God incarnate?” you could interpret the verse according to Incarnational lines.

Unfortunately, that verse teaches nothing of the sort.

Thanks for the post, Andrew. It was interesting and informative, though I agree with the hubris point.

I find the theological slicing and dicing in the discussions referred to mystifying and weird. Even the phrase “eternal generation” is a contradiction in terms (generation = birth, origin, beginning). Use of terms like ‘hierarchy’ and ‘subordination’ are quite alien to the presentation of the Father/Son relationship in the gospels, and should in themselves cast doubt over the territory onto which the discussion has moved.

With regard to the significance of “life” in 5:26, yes, the immediate context is resurrection, but even here, the “life” of the resurrection is something to be experienced in advance of physical resurrection (5:24). This agrees with Ephesians 2:6 and Colossians 3:1-2.

The references to “life” from John 1 onwards are too frequent to cite, but the climactic “life” of John 17:3 is decisive. It is “to know you, the only true God and to know Jesus Christ, whom you have sent”. Or to quote 1 John 5:12 — “He who has the Son has life; he who does not have the Son of God does not have life”.

Augustine opens up a theological chasm in the extract you quote, by introducing the concept of “life” in the Son as “life by being begotten”, which is an unnecessary step into theological complexity and obscurity. 5:26 need mean no more than the willing endowment of the Father to the Son of that which was the Son’s by right, but which he had willingly relinquished through his humble birth.

I find that such use of expressions like Sander’s concerning a believer’s ‘non-wilful ignorance’ sum up the whole problem. The man who goes to school and gets a bunch of people to pat him on the back and say what a clever fellow he is becomes entitled to an audience, anybody else is ignorant; either wilfully or not, and it is the discernment of the Prosecutor/Pastor to determine this.
You get saved by believing Jesus’ died for you, and he died for you that you might believe, but then you go to a Church where they start talking complete bullshit which if you can’t believe why then you’re not a Christian, and God forbid you offer plain texts which continually inform us that Jesus was a man both during his life and following his resurrection, because then you’re being either divisive or aggressive, and you’re left thinking you’ve voluntarily placed yourself in room 101 and these pusillanimous passive-aggressive shits are the rats of the world trying to gnaw out the new found sight God has given you and you proclaim with a scream almost out your mind ‘I would that they were cut off that trouble you’ and then you praise Jesus who is faithful in declaring ‘my sheep hear my voice’ so do yourself a favour and stop listening to these wankers.

The Apocalyptic Symbolism of Mark 8:38 and (not) the Final Reign of God
Societal collapse, deep adaptation, and an agenda for mission
Multifaith Matters podcast: my conversation with missiologist Michael Cooper about the narrative-historical method
What is the essence of Christianity?
How does the New Testament predict the future?
END_OF_DOCUMENT_TOKEN_TO_BE_REPLACED