What should we do with the lost and found parables today?

The three stories told in Luke 15 about something or someone that is lost and then found are not about us, were not addressed to us, were not written for us. They are certainly not vehicles of a universal evangelistic message about lost sinners who need to be saved by the atoning death of Jesus and reconciled to God. They were told by Jesus to one section of first century Jewish society to explain why he hung out with another section of first century Jewish society:

Now the tax collectors and sinners were all drawing near to hear him. And the Pharisees and the scribes grumbled, saying, “This man receives sinners and eats with them.” So he told them this parable… (Lk. 15:1–3)

…and then another one, and then another one—all to the same effect. They are not free-floating fables, like Aesop’s timeless story of the hare and the tortoise. They should not really be subjected to vitrification in our churches. They belong somewhere, sometime. They have a context. They are rooted in history. 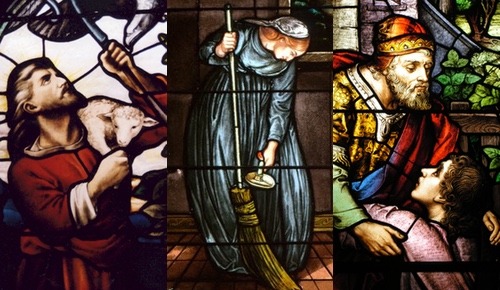 In the first two stories a man loses one sheep out of a hundred and goes searching for it, a woman loses one silver coin out of ten and turns the house upside down to find it. So there is someone who goes to a lot of trouble to look for one “sinner” who is lost. Presumably Jesus has in mind his own prophetic ministry, but the main point is that the lost sheep is restored to the flock, the lost coin is put back in the woman’s purse with the other nine. There is great rejoicing in heaven over the one sinner who repents, but it is not all about the individual and God. The celebration is over the restoration of the “lost” Jew—a person such as the tax collector Levi (Lk. 5:27-32)—to first century Israel.

No one goes looking for the prodigal son; he merely comes to his senses. But the “sinner” is likewise restored to the household of Israel. I have argued, in fact, that in Luke’s Gospel the father to whom lost Israel is restored is not God but Abraham. God is Father in relation to those—Jesus in the first place, but also his disciples—who suffer in pursuit of their calling. Abraham is the father to whom wayward and outcast Jews such as Zacchaeus and Lazarus are restored—and from whom the hypocritical and unrighteous leaders of Israel will be cut off.

John the Baptist berated the crowds that came to him, claiming that they had Abraham as their father: “For I tell you, God is able from these stones to raise up children for Abraham” (Lk. 3:8). The younger son is one of those stones. When God’s wrath comes upon Israel, many will be excluded from the table at which Abraham, Isaac, Jacob and all the prophets will be seated (Lk. 13:28-29). The older son comes perilously close to excluding himself from the homecoming party.

So these were stories told to first century Israel, to the affronted Pharisees and scribes in particular. They have no more direct relevance to our circumstances than the “parable” of the pot which Ezekiel told to the “rebellious house” of Israel at the time of the siege of Jerusalem (Ezek. 24:1-5).

But the question still has to be asked: How are we supposed to preach these parables today? They are great stories—surely there’s something that we can do with them? Of course there is.

First, the parables have crucial historical relevance for the modern church. They help us to understand the impact of Jesus’ prophetic ministry to Israel, how it changed things. This is by no means a trivial matter. By safeguarding the historical integrity of Jesus’ teaching in this way 1) we gain a better understanding of how the people of God was transformed by the crisis; and 2) we may learn to tell a more compelling and more credible story about the people of God in the world today.

Secondly, the parables have analogical relevance to the extent that we are confronted today with behaviours and outcomes similar to those which Jesus encountered. If we look at the church and see, on the one hand, a self-righteous and hypocritical leadership that is intent on maintaining its own authority and status at the expense of the well-being, integrity and mission of the community, and on the other, believers who have lost their bearings, misfits and rebels who have drifted to the margins, who suffer contempt and disregard from the “righteous”, then we may have good reason to read these stories and exclaim, “Look, it’s happening again! Have we learned nothing?” We may even suspect that, as then so now, God is renewing his people in this controversial fashion from the margins. So feel free to preach the parables of the lost sheep, coin and son to the leadership of your church or denomination!

Finally, we should learn to tell our own stories and not feel that we have to keep reusing Jesus’ out-of-date parables hoping that people won’t ask difficult questions about context. The prophet Jesus told new stories to first century Israel in the manner of the Old Testament prophets. Authoritative and transformative storytelling is a gift of the prophetic Spirit of the living God. There’s nothing to stop us doing the same thing.

How we got from kingdom to Trinity: Constantine and pagan monotheism
A trinitarian hermeneutic and how it breaks the New Testament narrative NEW
Cleanthes’ “Hymn to Zeus” and the renewal of monotheism
Did Jesus promise to return within the lifetime of his disciples?
Why did Jesus instruct his disciples not to preach the kingdom of God to Gentiles and Samaritans?

A trinitarian hermeneutic and how it breaks the New Testament narrative
Cleanthes’ “Hymn to Zeus” and the renewal of monotheism
Conversation with Mike Bird about In the Form of a God
Answering Mike Bird about the referent of "all things" in 1 Corinthians 8:6
Interview: The Preexistence of Christ and Narrative Historical Theology
How we got from kingdom to Trinity: Constantine and pagan monotheism
Jesus and Paul, works and faith
Some hazardous thoughts on the Trinity for a new year and a new era
END_OF_DOCUMENT_TOKEN_TO_BE_REPLACED