Keith Wansbrough: Looks good now, thanks. The…
Andrew: Thanks, Keith. It was…
Keith Wansbrough: The chart didn’t appear for…
Juanita: Hi there Sam We spoke…
Andrew: David, many thanks for this…
END_OF_DOCUMENT_TOKEN_TO_BE_REPLACED

Cleanthes’ “Hymn to Zeus” and the renewal of monotheism (3 comments)
Conversation with Mike Bird about In the Form of a God (0 comments)
Answering Mike Bird about the referent of "all things" in 1 Corinthians 8:6 (0 comments)
Interview: The Preexistence of Christ and Narrative Historical Theology (1 comment)
END_OF_DOCUMENT_TOKEN_TO_BE_REPLACED

We visited Philippi in September. We were staying in Kavala, in eastern Greece, formerly Neapolis, which is where Paul landed having sailed from Troas via Samothrace in response to a visionary summons to Macedonia (Acts 16:11-12). The extensive ruins of the Roman colony of Philippi lie about 12 miles inland.

We climbed to the Acropolis that looks down on the ruins of the city, we wandered past the supposed prison from which Paul and Silas were liberated by an earthquake, crossed the forum to the imposing remains of Basilica B, skirted round to the octagonal Basilica of Paul with its faded mosaics, and took a leisurely stroll along the Egnatian way. A short distance from the site is the Gangitis river where Paul met and baptised Lydia (Acts 16:13-15).

At the heart of the letter that Paul later wrote to the church in Philippi is, of course, the remarkable hymn-like narrative of Christ’s humiliation, suffering and exaltation.

…who, though he was in the form of God, did not count equality with God a thing to be grasped, but emptied himself, by taking the form of a servant, being born in the likeness of men. And being found in human form, he humbled himself by becoming obedient to the point of death, even death on a cross.

Therefore God has highly exalted him and bestowed on him the name that is above every name, so that at the name of Jesus every knee should bow, in heaven and on earth and under the earth, and every tongue confess that Jesus Christ is Lord, to the glory of God the Father. (Phil. 2:6–11)

Jesus did not do what Hellenistic kings typically did—Antiochus IV Epiphanes, for example (cf. Dan. 11:36). He did not cling to or aspire to or seek to exploit (depending on how you read harpagmon) equality with God. He became a person of no account. He suffered the sort of degrading death that was normally reserved for slaves, insurrectionists and terrorists. But the living God of Israel raised his Son from the dead and gave him a name and authority which were otherwise his alone.

I’ve read a lot of essays and heard a lot of sermons that draw two lessons from this passage: first, that Jesus is God; secondly, that Christians should exhibit the same humility. That gets both too much and too little out of the text.

The narrative tells us how the God of Israel would eventually be glorified in the ancient pagan world—when the nations of the empire would finally come to the realisation that the crucified Jesus had been given all authority and power, had been made King of kings and Lord of lords, judge and ruler of the nations. 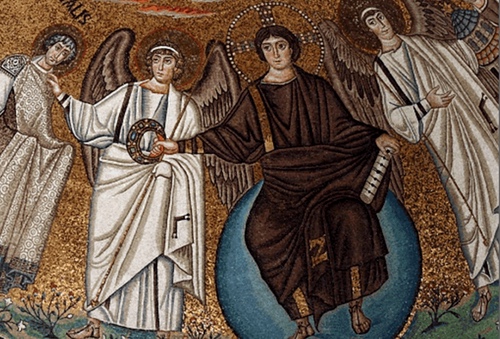 Paul’s argument in the letter is basically this: the small community of “saints” in Philippi, like others across the Greek-Roman world, had been entrusted with the eschatological task of bearing consistent, visible, living, corporate witness to the coming parousia of Jesus.

What was the parousia? In the ancient context the word signified the coming of a ruler to a city, and typically the citizens would go out to celebrate his arrival and accompany him back into the city (cf. 1 Thess. 4:16-17). In Paul’s eschatology the parousia was the symbolic coming of Christ from his heavenly capital to be welcomed as king by the cities of the Greek-Roman world. This is when the churches would be vindicated—publicly justified—for their faith and faithfulness.

So Paul’s “gospel” to the Greek-Roman world, in the first place, was simply the public announcement that this was going to happen.

In that respect, the gospel was a fundamentally political idea. It was the declaration not simply that God was in charge but that in a foreseeable future his sovereignty would be widely and publicly acknowledged by peoples and cultures that for centuries had served the old gods.

It took three hundred years or so, but eventually Christ was publicly welcomed as the true King, the Son of the living God, in cities such as Philippi across the empire, and a new age dawned.

The story is told in the archaeology of Philippi with the basilicas and bishop’s palace located around the Roman forum. The site is testimony in rubble to the fact that the God of Israel turned the ancient world upside-down, as the apostles had predicted. You walk 50 meters from the Roman forum into the precincts of Basilica B, and you have crossed the greatest “eschatological” boundary in the history of the people of God. 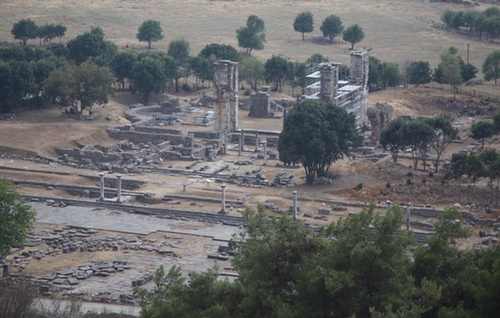 The temples were knocked down or converted into churches. The great basilicas were built, with their stunning mosaic depictions of Christ the cosmocrator seated in the heavens, at the right hand of God, ruling over the nations, public confessions in brick and stone negating the ubiquitous inscriptions to Caesar as saviour and son of god.

But for the churches to hold fast to this conviction, this hope, through to the day of the Lord would not be easy. Paul was painfully aware that these unorthodox, antisocial, atheistic communities of saints were embarking on a long and dangerous journey. Their calling, their mission, from the start was to suffer for the sake of God’s new future:

For it has been granted to you that for the sake of Christ you should not only believe in him but also suffer for his sake, engaged in the same conflict that you saw I had and now hear that I still have. (Phil. 1:29–30)

This is why he makes so much of his own experience in this letter. How would God establish his rule over the nations? Not through the Torah-observance of the synagogues—that was a lost cause. Not through the vaunted wisdom of the Greeks.

No, the missio Dei would be achieved through the obedience, suffering, and faithful witness of men and women who believed that Jesus had been raised from the dead and seated at the right hand of God as Lord and Christ.

That was why it mattered so much to Paul that he was emulating Jesus in his sufferings, becoming like him in his death, “that by any means possible I may attain the resurrection from the dead” (Phil. 3:9-10; cf. Col. 1:24).

It was because the pattern of Christ’s suffering and vindication, his death and resurrection, was consistently reproduced in the lives of the apostles and the churches that Jesus was eventually acclaimed as Lord and King by the cities and peoples of the Greek-Roman world.

That political-religious arrangement, as I keep saying, has disintegrated in Europe over the last two hundred years. Now it is the churches that are being knocked down or repurposed, converted into luxury flats, bingo halls, and mosques. The urban landscape now tells a very different story.

But this does not alter the fact that Jesus is (still) Lord over all authorities and powers for the sake of the church. He still does what a biblical king has to do: he judges and defends his people.

I don’t think so.

It seems to me rather that we have left the political space of nation and empire and have moved into a global political space. The eschatological task—the missio Dei, if you like—is not to claim the empire for the former God of Israel but to establish the global or creational or cosmic or humanistic or modern or postmodern credibility of the former God of Christendom.

You wrote, “the crucified Jesus had been given all authority and power”.

The fact that the Lord Jesus possesses “all power” means He is the Almighty (cf. Matthew 28:18).

Why did Jesus instruct his disciples not to preach the kingdom of God to Gentiles and Samaritans?
Cleanthes’ “Hymn to Zeus” and the renewal of monotheism NEW
Did Jesus promise to return within the lifetime of his disciples?
Alexandria and Antioch: a revised tale of two cities
Man and woman as “one flesh”: are we just obsessed with sex?

Cleanthes’ “Hymn to Zeus” and the renewal of monotheism
Conversation with Mike Bird about In the Form of a God
Answering Mike Bird about the referent of "all things" in 1 Corinthians 8:6
Interview: The Preexistence of Christ and Narrative Historical Theology
How we got from kingdom to Trinity: Constantine and pagan monotheism
Jesus and Paul, works and faith
Some hazardous thoughts on the Trinity for a new year and a new era
Was it Roman custom for people to return to their home town for a census?
END_OF_DOCUMENT_TOKEN_TO_BE_REPLACED