toddh: Very interesting, that…
Andrew: Agreed. We may not be able…
davo: It is not clear that Adam…
Samuel Conner: Thank you, Andrew. I must…
Spring blossom : Luke 4:17 The scroll of the…
END_OF_DOCUMENT_TOKEN_TO_BE_REPLACED

How to pray the prayer of Jabez (0 comments)
Falling sideways: why not much changed when Adam and Eve sinned (3 comments)
How did Jesus’ disciples imagine that he would “redeem Israel”? (18 comments)
Why the outpouring of the Spirit on the day of Pentecost marked an end, not a beginning (3 comments)
END_OF_DOCUMENT_TOKEN_TO_BE_REPLACED

In yesterday’s post I touched on the parable of the vineyard in The Shepherd of Hermas Parable 5 as an early instance of an adoptionist christology. Mark Edwards drew my attention to a ZNTW article by Bogdan Bucur, which argues for a non-adoptionist reading of the parable and its interpretation. 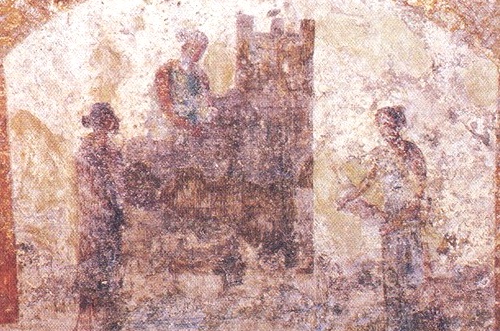 This is all a bit of a digression, but it makes for an interesting exercise in interpretation and provides some insight into one strand of early Christian thought. The Shepherd is usually dated late first century / early second century.

The parable is presented in the first place as a teaching about fasting, which has been the topic of conversation between Hermas and the angelic shepherd: “Listen to the parable that I am about to tell you about fasting. A certain man had a field and many slaves….”

The man is about to go on a journey and he puts one of his slaves in charge of his vineyard, with the promise of freedom if he obeys his command. The slave does more than is asked of him, so on his return the master consults with his son and his advisors regarding how best to reward him, and they agree that the slave should be made joint-heir with the son. The master then gives a feast for the slave, but the slave takes enough for himself and distributes the rest of the food among his fellow slaves. Nothing is said about the “identity” of the characters in the parable.

The narrator asks for an explanation of “these parables”. The lesson with respect to fasting is that fasting is good only if it is added to obedience to the commandments—just as the slave was commended for the work that he did beyond the initial instructions of the master (5.3). This is the first interpretation.

The narrator is not satisfied with this lesson because it does not account for the allegorical details of the parable. So he asks the shepherd to explain “the parable of the field and the master and the vineyard and the slave”.

There follows a peculiar conversation regarding whether or not it is right to seek further elucidation of the parable. But in the end the shepherd finally agrees to provide a second interpretation explaining the allegorical details:

The field is this world, and the lord of the field is the one who created all things and perfected them and endowed them with power, and the son is the Holy Spirit, and the slave is the Son of God, and the vines are this people that he himself planted. The fences are the holy angels of the Lord who keep his people together, and the weeds that are pulled up out of the vineyard are the transgressions of God’s servants. The foods that he sent to him from the feast are the commandments that he gave to his people through his Son, and the friends and advisers are the holy angels who were created first; and the absence of the master is the time remaining until his coming. (5.5.2-3)

So rather unexpectedly, the “son” is the Holy Spirit and the “slave” is the Son of God, Jesus.

This is where it gets tricky.

First, I think that Bucur overstates the contrast between the two interpretations (131). The slave does not have to represent the “ideal Christian” in order to justify the lesson about obedience and fasting. The conversation in 5.4 seems to me to suggest that the deeper allegorical meaning is present from the start but there is doubt as to whether the narrator is fit to understand it. The action of the slave who is the “Son of God” then becomes exemplary for all in whom the Spirit lives.

The whole thing is certainly very confusing, but it seem to me that the adoptionist interpretation more or less holds.

God planted the vineyard—that is, he created the people—and handed it over to his Son. The Son put angels over them to protect them, “cleansed their sins with great labor and enduring much toil”, and gave them the Law which he had received from his Father. So the Son of God is “Lord of the people, having received all power from his Father” (5.6.4).

This describes the work of the slave in the parable, whom the shepherd has identified with the Son of God.

But the shepherd then says, “hear why the Lord took his Son and the glorious angels as counselors concerning the inheritance of the slave”. He means to explain a particular detail in the interpretation that has been given, so I think again that Bucur makes too much of the discontinuity at this point (133-34). This is not another “new interpretation”; it is a development of a certain aspect of the main allegorical explanation of the parable.

The shift from “Son of God” to “flesh” is theologically significant, but this belongs to the further level of interpretation: God has to decide whether to bring the flesh—in the person of Jesus—into the heavenly mode of existence that he shares with the Spirit and the angels. This is a radical innovation, and it needs careful consideration. Do we let human flesh in? Yes, if—as in this case—it has not defiled the Spirit living in it.

So the “son” in this extension to the interpretation is not the slave (= the Son of God, i.e., Jesus) but the son in the parable (= the Holy Spirit). The owner of the vineyard consults with his son and his advisors about rewarding the obedient slave. God consults with the Holy Spirit and his angelic counsellors about rewarding the obedient Son of God.

The use of the allegorical “son” for the Holy Spirit is disorienting, but aside from that, the interpretation is consistent and straightforward. There is no “incoherence” in the christology.

The shepherd explains. God caused the “preexistent Holy Spirit, which created the whole creation”, to “live in the flesh that he wished”. This corresponds to the detail of the parable: the master was about to go on a journey, so he “chose a certain slave who was reliable”. That the slave was chosen from among others rather than born to the task suggests that it is not the incarnation that is in view. The reference is to the baptism of Jesus, when the Spirit came upon him.

The flesh in which the pre-existent Spirit lived served the Spirit well, so God “chose it as a partner with the Holy Spirit”.

Here we come back to the conference between the master, the son and his advisors about rewarding the slave, the flesh in which the Holy Spirit had lived:

So he took the son and the glorious angels as counselors, in order that this flesh also, having served the spirit blamelessly, might have some place to live, and not appear to have lost the reward of its service. For all flesh in which the holy spirit has lived will, if it proves to be undefiled and spotless, receive a reward.

The sliding around of terminology between parable and interpretation is certainly confusing, but it seem to me that the adoptionist interpretation more or less holds. The pre-existent Spirit is the son in the parable, Jesus is the slave. The Spirit, however, dwells in the human body of Jesus, and because Jesus-the-slave performs his task in holiness and purity, does not defile the Spirit, and cooperates with the Spirit in all respects, God and the Spirit (the original son) agree to make the human Jesus joint-heir so that the flesh, “having served the spirit blamelessly, might have some place to live, and not appear to have lost the reward of its service” (5.6.7).

What’s not made clear here is whether this is an adoption into the godhead, so to speak. Arguably, the reference is simply to the resurrection and ascension of Jesus. The point is that Jesus’ faithfulness as a slave led to his death. If he was to be rewarded, he had to be raised from the dead; and if he was raised from the dead, he needed a place to live. So God agreed with the Holy Spirit and his angelic advisors that Jesus would be permitted to live in heaven. Entirely absent is the New Testament emphasis on kingdom.

Finally, the shepherd says that “all flesh in which the Holy Spirit has lived will, if it proves to be undefiled and spotless, receive a reward”, and he exhorts the narrator to “Keep this flesh of yours clean and undefiled”.

This takes us back to the beginning, but it does not determine the interpretation of the slave in the parable. It is an application drawn from the fact that Jesus did not defile the Spirit and was therefore rewarded. The parable is about the novel inclusion of the human body of Jesus in heaven, but the expectation is that others will be similarly rewarded if they do not defile the Spirit which lives in them.

How to pray the prayer of Jabez
Why did Jesus instruct his disciples not to preach the kingdom of God to Gentiles and Samaritans?
Why did the Jews accuse Jesus of making himself equal to God?
Why does Jesus give the kingdom back in the end and become subject again to God?
Falling sideways: why not much changed when Adam and Eve sinned