Juanita: Hi there Sam We spoke…
Andrew: David, many thanks for this…
David: And, for further reading, I…
David: There’s a substance to this…
Arthur Davis: That, I think, is the…
END_OF_DOCUMENT_TOKEN_TO_BE_REPLACED

Conversation with Mike Bird about In the Form of a God (0 comments)
Answering Mike Bird about the referent of "all things" in 1 Corinthians 8:6 (0 comments)
Interview: The Preexistence of Christ and Narrative Historical Theology (1 comment)
How we got from kingdom to Trinity: Constantine and pagan monotheism (2 comments)
END_OF_DOCUMENT_TOKEN_TO_BE_REPLACED

Melchizedek and the Son of God

This is a quick response to Mark Nieweg’s question, following yesterday’s post on Jesus as the Son of God, whether Hebrews 7:13 is an argument for the eternal existence of the Son of God: “He is without father or mother or genealogy, having neither beginning of days nor end of life, but resembling the Son of God he continues a priest forever” (ESV). 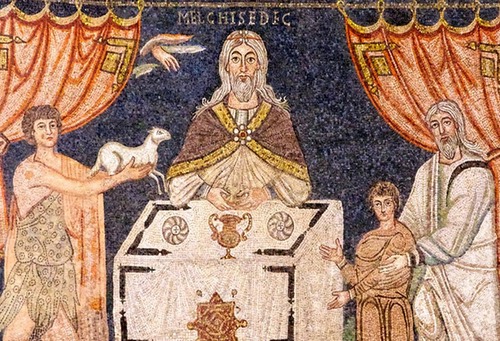 Melchizedek is discussed because the writer has talked about Jesus going “as a forerunner on our behalf, having become a high priest forever after the order of Melchizedek” (Heb. 6:20). This refers back to the writer’s earlier linking of Psalm 2:7 and Psalm 110:4:

So also Christ did not exalt himself to be made a high priest, but was appointed by him who said to him, “You are my Son, today I have begotten you”; as he says also in another place, “You are a priest forever, after the order of Melchizedek.” (Heb. 5:5–6)

The connection with the resurrection is apparent from Hebrews 1:3-5:

After making purification for sins, he sat down at the right hand of the Majesty on high, having become as much superior to angels as the name he has inherited is more excellent than theirs. For to which of the angels did God ever say, “You are my Son, today I have begotten you”?

So Jesus has not always been a Melchizedek-like priest. He becomes a priest forever after the order of Melchizedek at his resurrection, when he is seated at the right hand of YHWH to judge and rule over both Israel and the nations.

The writer then paraphrases the story of Melchizedek and Abraham from Genesis 14:18-20, provides an interpretation of his name, and characterises him further as being:

…without father, without mother, without genealogy, having neither beginning of days nor end of life, but being similar to the Son of God remains a priest for all time. (Heb. 7:3, my translation)

That is, in the text Melchizedek differs from the Levitical priests in that nothing is said about his birth, ancestry or subsequent life. We are not to conclude that the writer thought of Melchizedek as being literally an eternal figure—and certainly not that he was some sort of pre-incarnation of Jesus.

Melchizedek is compared to the Son of God, however, in the specific sense that he “remains a priest for all time”. We know about Jesus’ parents, we know the genealogies, we know that he was a descendant of David according to the flesh (cf. Rom. 1:3). As far as his past is concerned, he is not like Melchizedek.

But having become a king on the terms set out in Psalm 110, he is also a priest according to the order of Melchizedek (ie., a priest-king, a “king of righteousness”, a “king of peace”), and because he has been raised from the dead, he will perform this role for all time. That’s where the resemblance lies.

So, no, I don’t think that we are supposed to infer from the analogy that Jesus had existed as Son of God eternally before his resurrection from the dead. The argument is only that Jesus would now serve as great high priest on behalf of the struggling communities of believers indefinitely.

Thank you Andrew. This is very helpful.

Conversation with Mike Bird about In the Form of a God
Answering Mike Bird about the referent of "all things" in 1 Corinthians 8:6
Interview: The Preexistence of Christ and Narrative Historical Theology
How we got from kingdom to Trinity: Constantine and pagan monotheism
Jesus and Paul, works and faith
Some hazardous thoughts on the Trinity for a new year and a new era
Was it Roman custom for people to return to their home town for a census?
A Hindu asks a very good question about the death of Jesus and the salvation of Gentiles
END_OF_DOCUMENT_TOKEN_TO_BE_REPLACED