Wolfgang: Sometimes it might be good…
Samuel Conner: Re: Did the reference to…
Douglas Wilkinson: I’d ike to have seen you…
Andrew D: Thanks! That does make a lot…
Andrew: Very astute. The statement…
END_OF_DOCUMENT_TOKEN_TO_BE_REPLACED

How does the New Testament predict the future? (0 comments)
Who will be taken? Who will be left behind? Darn it, we’re all too late anyway! (2 comments)
Resurrection in the Old Testament: literal or metaphorical? (0 comments)
Thom Stark on the coming of the Son of Man: the Bible gets it right, Jesus gets it wrong? (9 comments)
END_OF_DOCUMENT_TOKEN_TO_BE_REPLACED

A meditation on narrative for Carnival day

The Notting Hill Carnival kicks off today, so there is no church this morning. The whole of Westbourne Grove has been fenced off, boarded up, covered with tarpaulins. Large numbers of decent people have evacuated the area. You’d think Hurricane Harvey was about to hit west London. But it has given me the opportunity to reflect, in a lazy Sunday morning fashion, on the narrative-historical method—what it is and why we need it. 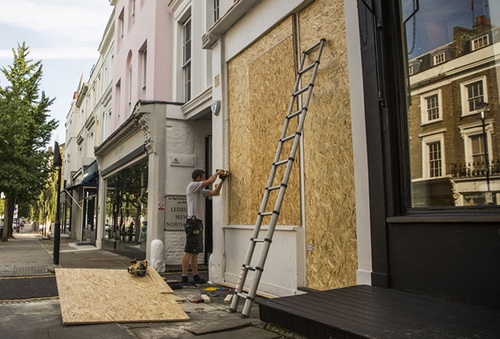 There is a baseline historical level of narrative about ancient Israel. It is a reconstruction—in fact, it is multiple reconstructions, evolving over time—not straightforward, unambiguous, unquestioned objective fact. It is clearer and more detailed in some parts than others. Prior to the foundation of the monarchy things are particularly murky. We have much greater confidence in the broad outlines of the story from the exile onwards, and by the time we get to Jesus we have a pretty good idea of what was going on, thanks not least to the first century Jewish historian Josephus, for all his faults.

The details of Jesus’ life and death are obviously a matter of dispute, but that he lived in Palestine in the early decades of the century and was crucified by Rome around 30 AD is generally now accepted as historical fact.

Since Jews of the period were deeply concerned about the future of the nation, we can include in the historical narrative the hope that the God of Israel, sooner or later, would turn the world upside down. Pagan Rome would be overthrown; Israel would be established as pre-eminent among the nations.

2. The prophetic interpretation of history

There is reliable historical material in the Bible, but what the Bible as a whole gives us is a prophetic narration of the historical experience of the people that claimed the land as the gift of the covenant God. It is an interpretation of the history of Israel on the assumption that Israel is a nation chosen by the creator God to serve his purposes. It is not monolithic, it is not without difficulties, but it is reasonably coherent.

It is at this level that the narrative-historical method engages with the Bible—how the prophetic community interprets its historical experience.

The prophetic or interpretive narrative is extended all the way back to the creation of the heavens and the earth. The stories of the patriarchs, the exodus, and the beginning of kingdom set the basic conditions for Israel’s existence. Prophetic texts concerning exile and restoration provide definitive paradigms for the clash with pagan empire.

In the New Testament period there is a fork in the narrative—in Jesus’ terms, between a broad storyline leading to destruction and a narrow storyline about suffering that would lead to a new future for the people of God, between defeat by pagan empire and eventual victory over pagan empire. In a nutshell, this is the story of the kingdom of God. In its latter stages it takes intensely apocalyptic forms.

My argument is that it culminates in the confession of Jesus as Lord by the nations of the Roman empire. But because the God of Israel is also the creator God, there is a cosmic epilogue, a final judgment and renewal of heaven and earth.

3. How the church forgot about history

With the victory of the church over Greek-Roman paganism, the apocalyptic narrative about kingdom lapses into obscurity. It is replaced by a greatly simplified narrative about 1) creation and fall, 2) incarnation and redemption, and 3) final judgment. Throughout the period of Christendom this functioned as a cosmic metanarrative. In the modern era, scientific method has taken over responsibility for the metanarratives, but the paradigm has survived at the personalised level: 1) you (singular) are a sinner, 2) Jesus died for your (singular) sins, 3) believe in him and you (singular) will not go to hell but will have eternal life.

The simplified three-part narrative was an abstraction from the prophetic narrative about Israel and the nations that fills the pages of the Bible from the building of Babel to the overthrow of Babylon the great. Systematic and dogmatic theologies have provided a further layer of rationalising abstraction. This was how the Church Fathers constructed a Christian worldview to replace the old pagan-Platonic worldview.

Back to history with a bump

Stages 3 and 4 were an expression of the triumph of the church that we call Christendom. They defined the worldview for a dominant Christian culture. The interpretation of history was no longer needed: the biblical narrative had reached its climax in the confession of Jesus as Lord by the nations of the former pagan oikoumenē. It was replaced by a universal theological system. On the one hand, the narrative-historical detail was stripped out of the Bible leaving the bare events of creation and fall, incarnation and redemption, and final judgment. On the other, the higher intellectual culture of the Greek-Roman world required the careful adaptation of the biblical “theological” material to prevailing philosophical mindset.

In the modern era Christianity lost the battle with secular Reason. The western worldview is no longer framed by the tripartite narrative of sin and redemption; rational investigation is no longer accountable to the systematicians and dogmatists. As a result, both these ways of thinking have become extremely problematic. They evolved under, and were designed for, a set of historical-cultural conditions that no longer exists.

History and the prophetic interpretation of history, however, remain viable modes of “self-expression” for the church as long as we retain the conviction that we are heirs to the calling of Abraham by way of the fork in the road established by Jesus.

It’s more than just going back to history and interpreting it. Implicit in your post I think is the next step. The Fathers and others abstracted the narrative to construct the simplified metanarrative much of the church still attempts to proclaim. But the context has changed. We need to look at the prophetic narrative afresh and construct a new metanarrative. We do need stages 3 and 4 — but for us, not for the Christendom church.

That metanarrative needs to be consistent with the Biblical story we have. It must be applicable to what we see around us. And I think also it must incorporate and situate the past 2000 years of the church. (Some of your charts and images have been heading in this direction — the roller coaster, the river.)

The contribution of the narrative-historical method is to take the full process seriously. We can’t just take the stage 4 Christendom interpretation and adapt it to a post-Enlightenment post-Christendom world. We have to go right back to stages 1 and 2 — our history and our narrative — and build prophetically from there.

How does the New Testament predict the future?
Who will be taken? Who will be left behind? Darn it, we’re all too late anyway!
Resurrection in the Old Testament: literal or metaphorical?
Thom Stark on the coming of the Son of Man: the Bible gets it right, Jesus gets it wrong?
Some notes on Jesus, Constantine, and violence
END_OF_DOCUMENT_TOKEN_TO_BE_REPLACED