Juanita: Hi there Sam We spoke…
Andrew: David, many thanks for this…
David: And, for further reading, I…
David: There’s a substance to this…
Arthur Davis: That, I think, is the…
END_OF_DOCUMENT_TOKEN_TO_BE_REPLACED

Conversation with Mike Bird about In the Form of a God (0 comments)
Answering Mike Bird about the referent of "all things" in 1 Corinthians 8:6 (0 comments)
Interview: The Preexistence of Christ and Narrative Historical Theology (1 comment)
How we got from kingdom to Trinity: Constantine and pagan monotheism (2 comments)
END_OF_DOCUMENT_TOKEN_TO_BE_REPLACED

I taught a module on the historical Jesus recently for church leaders. My starting point was the suggestion that there are two basic ways of telling the story about Jesus. Traditionally the church has told a vertical story: Jesus comes into the world from heaven to die for our sins and then returns to the Father, and that’s about it. There is a beginning (creation and fall) and an end (Jesus returns, final judgment), but what happens in history before and after the “Christ event” is a matter of only secondary theological interest. The traditional model, however, is coming under increasing pressure from what is essentially a historical reading of the New Testament. According to this paradigm, which is horizontal rather than vertical, diachronic rather than synchronic, Jesus plays a decisive part in the history of Israel, and his meaning for the world cannot be dissociated from that narrative.

The chart develops the contrasts between these two narratives. Click on it to see a larger version. 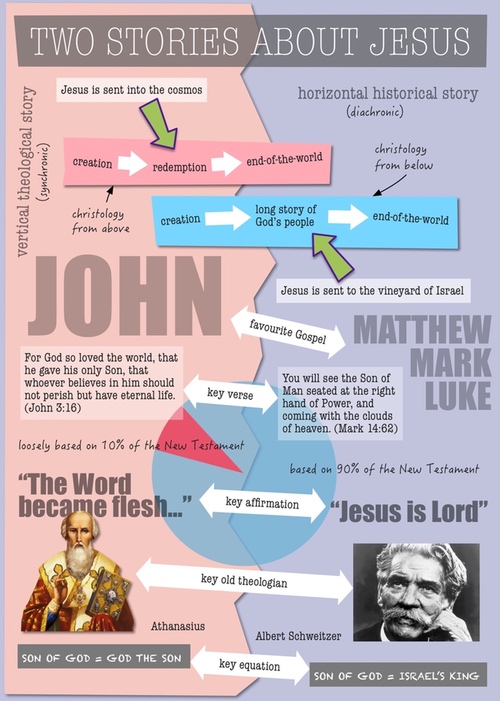 The theological story gives us a christology from above: God sends the Son into the middle of human history as God-incarnate to redeem humanity from its original sinfulness. The historical story gives us a christology from below: Jesus is sent to the vineyard of Israel. He is the obedient servant, empowered by the Spirit; he is the beloved Son who will inherit the future reign over the people. The historical story is bookended by creation and final judgment, but the whole thing needs to be foregrounded if we are to understood the significance of the life, death and resurrection of Jesus.

The theological story is heavily reliant on John’s Gospel, with John 3:16 being a key verse: the practical core of the story for the church is the universal offer of personal salvation. The historical reading depends on the Synoptics, with perhaps Mark 14:62 capturing its essence: the practical point for the historical people of God was not personal salvation but the assurance that Jesus would judge and rule over Israel and, subsequently, the nations—and that his followers would be vindicated. I made the point in relation to Samuel V. Adams’ critique of N.T. Wright that he makes disproportionate use of John.

The theological reading came to prominence in the patristic period. Athanasius’ On the Incarnation of the Word is a salient text for the paradigm. In my view, Albert Schweitzer should be given the credit for refocusing the mind of the church, albeit in a rather misleading fashion, on the Jewish apocalyptic narrative that accounts not only for Jesus but also for Paul. See his The Mystery of the Kingdom of God: The Secret of Jesus’ Messiahship and Passion.

Finally, the key equation for the theological narrative is that the New Testament phrase “Son of God” is equivalent to the trinitarian phrase “God the Son”, with the corresponding assumption that “Son of Man” denotes Jesus’ humanity. On the historical side of the great divide, “Son of God” refers supremely to Israel’s king. The “Son of Man” narrative adds to this the thought that the one—or the community—that inherits the kingdom will suffer first. So in Mark 14:62 Jesus tells Caiaphas that it will be the Son of Man, who will be rejected by Israel and killed, who will inherit rule over Israel at the right hand of YHWH.

Both stories are biblical, both are valid. The question is whether we should continue to subordinate the historical story to the theological story.

By the way, I’m sure you are aware of Daniel Kirk’s new book due out in November through Eerdmans: “A Man Attested by God.”

Yes, scripture has multiple voices, but I don’t think the voice of Athanasius was one of them. I just think we should bite the bullet and read scripture for it is.

I think I’d seen reference to Kirk’s book somewhere. November’s a long way off, though.

Athanasius’ voice was not one of the voices of scripture, nor Schweitzer, lol. :D

However, I would say that Athanasius consolidated a move away from the historical meaning of scripture whereas Schweitzer represented a significant step towards its retrieval.

That diagram is brilliant. Things like that are why I shop here.

Ditto. Do you think a loyalty card might be appropriate?

Thanks for that interesting read…it has been a journey for me, getting new glimpses of light thanks to your blog posts.
I know this is a little bit out of range but has anyone checked Dr Michael S Heiser out?
He has videos on Youtube that are interesting — https://www.youtube.com/watch?v=bZ-OwSH7IYM  — but starting with the one that centres on his book “The Unseen Realm” is far better to give a perspective on what follows in the next videos.
He does offer a far more synchronous paradigm of reading the entire gospel or Bible rather. As a scholar in the field of Biblical studies and an ancient language expert including Uggaritic and Mesopotamian writings he may have an edge that NT Wright and other New Testament scholars don’t have when it comes to understanding the Jewish world view which begins long before Jesus or Paul come on the scene.
It makes some really murky things easier to understand. Why this language of kingdoms, powers and principalities — and why this language of Fathers, Sons and Sons of God?
Let me know when you have heard him out. I wandered onto an orthodox Jewish website for news and found the same world view he was talking about staring me in the face again in a rabbi’s side article I wandered into by mistake.
So I had to go back and listen to him. It enhances the story just as NT Wright’s work enhances our understanding of the New Testament scripture.

This was actually pretty good. I enjoyed it a lot. In fact, I decided to buy his book and give it a read.

its good to be where books are easily accesible. third world life starves your mind in a way. but that is where the beauty of the internet comes in…
don’t miss out on the 95th Naked Bible podcast. it is mindblowing. slept at 3am in the morning wondering what on earth/or heaven had i just listened to! if that was Paul thinking maybe we have been reading our bibles upside down…

Conversation with Mike Bird about In the Form of a God
Answering Mike Bird about the referent of "all things" in 1 Corinthians 8:6
Interview: The Preexistence of Christ and Narrative Historical Theology
How we got from kingdom to Trinity: Constantine and pagan monotheism
Jesus and Paul, works and faith
Some hazardous thoughts on the Trinity for a new year and a new era
Was it Roman custom for people to return to their home town for a census?
A Hindu asks a very good question about the death of Jesus and the salvation of Gentiles
END_OF_DOCUMENT_TOKEN_TO_BE_REPLACED