davo: When the ordinary Jewish…
Mark Newton : What I don’t understand is…
Kevin Holtsberry: Very helpful summary. I…
Andrew: Thanks, for this, Richard…
Samuel Conner: Just starting into your new…
END_OF_DOCUMENT_TOKEN_TO_BE_REPLACED

In the form of a God: The Pre-existence of the Exalted Christ in Paul: what the book is about and why (2 comments)
Notes on J. Richard Middleton’s The Liberating Image: The Imago Dei in Genesis 1 (0 comments)
Our eco-theological blindspots and the climate crisis (0 comments)
Biblical hermeneutics and the destabilising of the world (0 comments)
END_OF_DOCUMENT_TOKEN_TO_BE_REPLACED

The narrative architecture of Jesus’ apocalyptic discourse in Mark 13 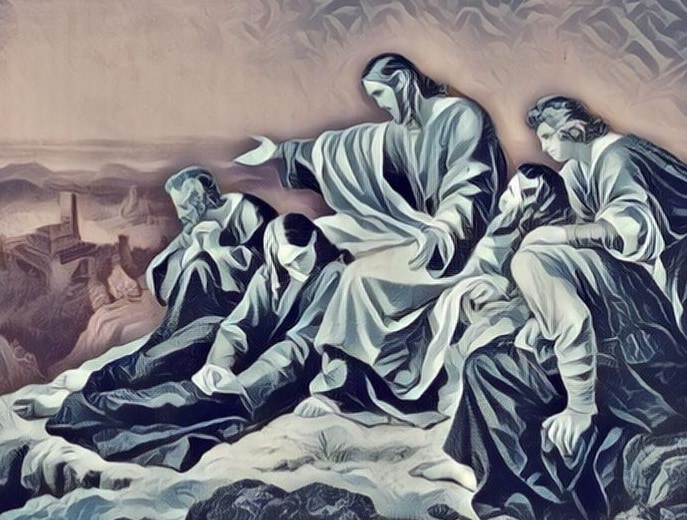 This is really just an appendix to the previous post on the two “ends” in Jesus’ apocalyptic discourse in Mark 13. I have summarised the development of thought, highlighting what seem to me to be the salient literary features, with a few brief observations at the end. The awkward translations are mine.

1-2 Jesus says to one of his disciples that the “great buildings” of the temple will be destroyed: “There will not be left here a stone upon a stone which will not be thrown down.”

3-4 Peter, James, John, and Andrew ask him privately, “Tell us when these things will be and what the sign whenever all these things are about to be completed (synteleisthai).” They are asking about the destruction of the temple. Matthew understands this as a reference to the “end (synteleias) of the age,” and I argued that this must be the end of the age of second temple Judaism, in effect.

5-8 Jesus begins his answer with a warning: “Watch (blepete) lest anyone should lead you astray.” False messiahs will rise up promising deliverance for Israel. There will be the threat of war and its associated hardships—the beginning of the birthpains.

9-13 The warning to watch out (blepete) for themselves is repeated with emphasis. They can expect to be rejected by their own families, brought to trial, beaten, and even killed as they carry out their mission of proclaiming to Israel and to the rulers of the nations the “good news” that YHWH will act decisively, within a generation, to judge and restore his people. The end will come when all the peoples of the Greek-Roman world have heard the message. Those who are still alive at the end will be saved from the final cataclysm.

14-18 “Whenever (hotan) you see the ‘abomination of desolation’…” is Jesus’ response to the disciples’ “Tell us… what the sign will be whenever (hotan) all these things are about to be completed.” An unclean Gentile presence in the sanctuary (cf. Dan. 9:27; 11:31; 12:11) will be the sign that the end is imminent.

19-20 The “end” will come with unprecedented “tribulation”. Josephus said of the war, “the misfortunes of all men, from the beginning of the world, if they be compared to these of the Jews, are not so considerable as they were” (War 1.12; cf. 6.429; Dan. 12:1). The “days” of the tribulation will be shortened for the sake of the disciples chosen to carry out the mission of proclamation to Israel and the nations.

21-22 Again there is a warning not to be fooled by “false messiahs and false prophets.”

23 The exhortation to “watch” (blepete) is repeated. Jesus says that he has “foretold” or given them advance warning of “all things,” referring to the sequence of events outlined in 13:5-22. What follows is interpretation and application.

24-26 So far it has been a narrative of gloom and doom. Now we get an emphatic reorientation towards positive outcomes, with a corresponding shift of literary register: “But (alla) in those days, after that tribulation….” Chaos in the heavens corresponds to political chaos on earth as in the prophets, but also in the language of prophetic vision “they will see the Son of Man coming in clouds with much power and glory.” Who are “they”? The leadership of the current wicked and adulterous generation of Israel (cf. Mk. 14:62) and those who will oppose the disciples’ mission. The reference is to the public vindication of Jesus—the belated recognition that he was right all along and, indeed, that he has been installed as Israel’s Lord and Christ at the right hand of God.

27 At the same time he will send out the angels to regather the surviving missionaries scattered across the Greek-Roman world so that they may take up their responsibilities in the reformed people of God.

28-31 As the disciples see this train of events approaching its climax, they will know that the fulfilment of their mission is near. In any case, Jesus assures them that “these things” will take place within a generation because it is this current generation of Israel that is under God’s judgment.

32 I argued in the previous post, first, that the peri de (“Now concerning…”) does not introduce a new topic but makes reference to a topic already under consideration; and secondly, that it is clear from the parallel with Zechariah 14:1-7 that the singular “that day or the hour” is not incompatible with the plural “those days” of the earlier passage. There is no reason to think that Jesus introduces a major temporal disjunction at this point. Indeed, it is very difficult to see how a first century reader would be expected to draw that conclusion.

33-36 To the repeated exhortation to “watch” is now added the motif of staying awake, because only God knows the precise timing. The disciples do not know the day or hour when the master will return home to take up management of the household, so they must stay awake, remain alert. It is this new metaphor that accounts for the change from plural to singular, though we saw from the Zechariah passage that there is nothing very remarkable about this.

As is clear from the development of the theme elsewhere, the return of the master is the moment when Jesus’ rule is established over the whole house of Israel, not merely over the small group of his disciples, when the rejected stone becomes the cornerstone of the whole edifice (cf. Mk. 12:10-11).

In Luke’s parable of the minas (Lk. 19:11-27), a man of noble birth goes away to receive a kingdom, his citizens send an embassy rejecting his rule, he returns, judges the work of his servants, and then has his enemies brought and put to death. The end of the story about the servants waiting for the return of their master is the destruction of Jerusalem and the temple, and the attendant loss of life.

Related content
Do we have two “ends” in Jesus’ apocalyptic discourse in Mark?