Keith Wansbrough: Looks good now, thanks. The…
Andrew: Thanks, Keith. It was…
Keith Wansbrough: The chart didn’t appear for…
Juanita: Hi there Sam We spoke…
Andrew: David, many thanks for this…
END_OF_DOCUMENT_TOKEN_TO_BE_REPLACED

Cleanthes’ “Hymn to Zeus” and the renewal of monotheism (3 comments)
Conversation with Mike Bird about In the Form of a God (0 comments)
Answering Mike Bird about the referent of "all things" in 1 Corinthians 8:6 (0 comments)
Interview: The Preexistence of Christ and Narrative Historical Theology (1 comment)
END_OF_DOCUMENT_TOKEN_TO_BE_REPLACED 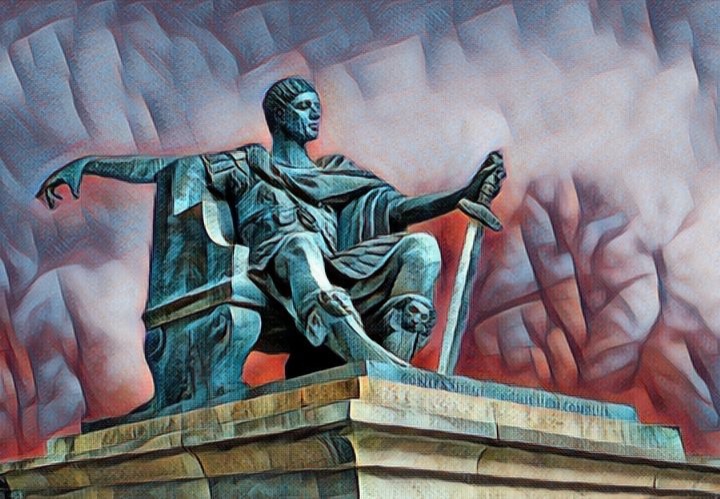 The statue of Constantine at York Minster

I got flung against a wall by a good friend for my defence of a narrative-historical perspective on Christendom—not literally, but a vigorous pushback on Facebook. I’ve replied to him there, but I’m posting the main points I made in response here as an addendum to the piece. Perhaps it will make things clearer. Perhaps it won’t.

This, I think, is my main point. The “kingdom of God” proclaimed in the New Testament was not thought of as an ideal or perfect state of affairs. It was expected to be the intervention of God in history and the establishment of a new political-religious order, but all the difficulties that go with historical experience would continue. There would still be wars, injustices, murder, pillaging, people-trafficking, and so on.

Jesus taught his followers to turn the other cheek as they went about the prophetic-evangelistic mission to Israel. Paul expected governments to wield the sword where necessary, because that’s how law and order was maintained in those days. The nations of the Christendom era worshipped the one creator God and confessed his Son as Lord, but the nations were not the church. The nations were expected to function as nations, as I said in the article.

The church was called to adhere to standards of holiness, as a priestly prophetic people on behalf of the nations, which presumably would have—or should have—included not resorting to arms to defend itself, and on occasion the church lived up to those standards. But I don’t think there’s anything in the New Testament to suggest that the church would somehow transcend its innate sinfulness during the period of Christ’s rule over the nations, after the parousia. If anything, I would say that the apostles were acutely aware of the potential for moral and spiritual failure, both in the period leading up to the conversion of the nations and in the age-to-come.

Jesus said that the “poor” or the “poor in spirit” would receive the kingdom of heaven and that the “meek” would inherit the land. He did not say that they would then get everything right.

I would also say (and I’m not just trying to be provocative here) that Jesus was not as inclusive as we might like him to have been. The Jesus of the Synoptic Gospels, at least, on the face of it, was a Jewish nationalist. He condemned the corrupt and hypocritical leadership of his people; he predicted that they would be deposed by God and management of the vineyard of Israel transferred to the riff-raff with whom he mostly hung out. But he clearly did not leave his followers with a blueprint for the inclusion of non-Jews in renewed Israel.

Still, the example of Jesus in the Gospels remains formative and inspirational for churches that are committed to him in service under changing historical conditions, not least at a time when the people of God is again being re-formed from the margins.

But the message of the New Testament as a whole, I think, is that Jesus would rule in heaven “with a rod of iron” vis-à-vis the nations until the last enemy is destroyed. The apostles went on to say things about Jesus that he did not say about himself, because his resurrection opened up a whole new set of “political” possibilities as far as the nations were concerned. They did not expect their converts to “follow” a Galilean prophet-messiah. They expected them to acclaim a risen Lord who would one day fairly soon “come” in some sense to rule the nations.

Of course, we can keep deferring the fulfilment of this kingdom, but I really don’t think that the New Testament allows us to do that. The thoroughly Jewish apocalyptic outlook that we see both in Jesus and in the messengers that he sent to the nations suggests that they expected realistic outcomes in a foreseeable future. We can talk about a “now and not yet here,” to be sure, but I don’t think this is a tension between an imperfect and a perfect kingdom reality. The perfect is not “kingdom,” which lasts only as long as there are enemies, but new creation. The tension, therefore, is between the imperfect witness of the churches and the imperfect reality of the rule of Christ over the nations.

Jesus’ role in heaven is to be understood, it seems to me, as that of judge and ruler of the nations. We must suppose theologically that just as YHWH judged and ruled over his people, not least in their relation to the nations, in the Old Testament period, Jesus judged and ruled on God’s behalf over his people, as they related to the nations, in the Christendom period—let’s suggest the Reformation, for example. So my argument does not require us to think that Jesus endorsed everything that his people did in the Christendom era.

The question, then, is really whether we take seriously the dynamic government of the creator God in all history, not just in the remote biblical bit.

Finally, I agree that there was some diffusion of Christianity in other directions, but there was no systematic New Testament mission to the Persians or India or Africa beyond the boundaries of the Roman Empire. Christianity as we know it today, even on a global basis, was the product of the apostolic mission to the whole empire, east and west, and the eventual imperial expansion of western Christianity. The irony is that we have a vibrantly multicultural church today because white Europeans—mostly well intentioned, but people of their age—took the gospel to Asia, Africa, the Americas, and beyond. Now that Christendom has imploded, that pluralism is functioning in different ways, coming back to bite us. But history is what it is. We can’t go back and change it.

Cleanthes’ “Hymn to Zeus” and the renewal of monotheism
Conversation with Mike Bird about In the Form of a God
Answering Mike Bird about the referent of "all things" in 1 Corinthians 8:6
Interview: The Preexistence of Christ and Narrative Historical Theology
How we got from kingdom to Trinity: Constantine and pagan monotheism
Jesus and Paul, works and faith
Some hazardous thoughts on the Trinity for a new year and a new era
Was it Roman custom for people to return to their home town for a census?
END_OF_DOCUMENT_TOKEN_TO_BE_REPLACED