Gerald: TreeI see the New Heaven as…
Samuel Conner: This is just an…
Helge Seekamp: Here the transcription as…
Helge Seekamp: Now, I worked it through and…
Keith Witwer: Gentlemen,  Thanks for the…
END_OF_DOCUMENT_TOKEN_TO_BE_REPLACED 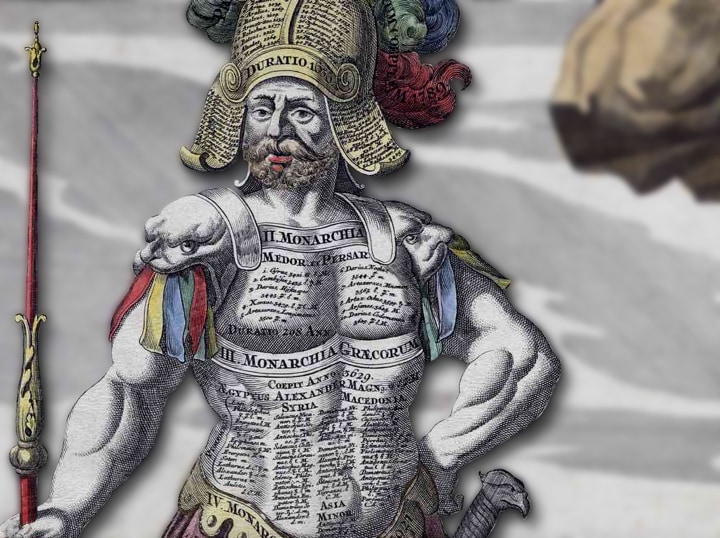 Alistair Begg says that the American church needs to get used to living in exile. It will become much smaller, may lose some legal protections, will face growing antagonism, and will find itself increasingly alienated from society. People may lose their jobs because of their faith, places of public worship may be closed, and so on….

In order to adjust to living in such dramatically degraded conditions the church may draw inspiration not only from the marginalised circumstances of the New Testament communities but also from the book of Daniel.

In a dream Nebuchadnezzar sees a great statue demolished by a stone “cut out by no human hand” (Dan. 2:31-35). The statue represents the great empires of the ancient world, which will be superseded by the kingdom of God. The message is clear: “human history is under the control of God, and he has a purpose that will be achieved.”

This vision was fulfilled, Begg says, when the great statue of Roman power was smashed by the rock of Jesus’ crucifixion. Remarkably, the rock became a mountain that filled the whole earth, so the church today can stop worrying that it “cannot survive the empire of an aggressively secular post-Christendom.”

Much of this is good and helpful—Begg is British after all, and even a graduate of the London School of Theology, like me, only much more successful. He is right to say that the church in the West must come to terms with its new diminished status in the world, though I suspect it will be a far more painful and disorderly process than is suggested by his quiet call to commitment, prayer, and faithful church attendance. He is also right to stress that the God of history, whom we serve, is in control—that we are still part of a historical narrative going back to Daniel and beyond.

But I think that the narration of history can be done better.

Daniel does not envisage a transcendent kingdom of God that will co-exist with the kingdoms of the earth. The kingdoms represented by the statue, beginning with Nebuchadnezzar himself, the head of gold, were instated by God (Dan. 2:37). Dominion, etc., over peoples and nations, is then taken from them and is given to that section of Israel which remained faithful when the Greek king Antiochus Epiphanes sought violently to suppress Jewish religious practice. The vision is that the people of the saints of the Most High will rule in the place of the old pagan empires—not as some sort of spiritual “kingdom” alongside them.

The new order lasted a very long time, but it did not last forever. The church is now struggling to survive in the “empire of an aggressively secular post-Christendom.” Kingdom has come and gone.

So I think we have to say that, in the perspective of the New Testament, Daniel’s apocalyptic argument about the giving of “dominion and glory and a kingdom” to “one like a son of man” (“thine is the kingdom, the power, and the glory”) is fulfilled historically when the pagan Roman Empire, as an empire, confessed Jesus as Lord, to the glory of the God of Israel, who is the living and true God.

That became Christendom—the concrete political-religious domain of the Christian peoples. The coming of the kingdom of God, regarding which Paul was still testifying to the Jews in Rome (Acts 28:23), would consist in judgment against both the unrighteous Jew and the idolatrous Greek, and in the establishment of an alternative social order.

That new order lasted a very long time, but it did not last forever. As Begg notes, the church is now struggling to survive in the “empire of an aggressively secular post-Christendom.” Kingdom has come and gone. The story carries on. A new “empire” has arisen, which, in its more radical forms, is bent on suppressing all vestiges of the ancien régime.

Nothing in this telling of the story leads us to think that Christ has been removed from his position of authority and glory at the right hand of God. He will be there, for the sake of his people, until the last enemy has been destroyed. What has changed is that the nations and cultures of the West no longer confess him as Lord. In political terms that may look and feel like “exile,” but the metaphor carries dubious connotations: we have been exiled from our homeland and hope to be allowed at some point to return to it.

There is also a risk, perhaps, that it will breed a defensive, separatist mentality—the beleaguered persecuted church against the world. Jeremiah’s letter to the exiles is not a missional text; it is a mandate for survival. Seek the welfare of the city because “in its welfare you will find your welfare” (Jer. 29:7). Build houses, grow food, have children and grandchildren in order that in seventy years there may be a surviving Jewish community to be brought back to the land (Jer. 29:10). But there is clearly the possibility of flourishing in exile, and Daniel and his colleagues turn out to be extremely successful Babylonian bureaucrats.

Part of my argument about same-sex relationships is that the church, as a community of new creation, ought to be in a position to model the best of the emerging secular, post-Christian anthropology, in order to transmit the original blessing of creation, always in piecemeal and impermanent fashion, to the world around us.

So I think it may be preferable simply to think of the church as a priestly-prophetic people, called to serve the living God, in the midst of the nations and cultures in which we are—by whatever quirk of history—embedded. Christendom was not exactly an aberration. It was the concrete historical embodiment of the sovereignty of the God of Israel as determined by the ancient political context—the destruction of the great statue, the transfer of sovereignty from the beasts of pagan empire to a people who served the living God. But for all its immense theological and political significance, even that was only a chapter or two in the story of God and his people.

Related content
Is Jeremiah’s letter to the exiles a missional text?
Is the church in the post-Christian West in exile?

Andrew, I saw this book and had to wonder if you had read it:

“Pagans and Christians in the City: Culture Wars from the Tiber to the Potomac (Emory University Studies in Law and Religion) by Steven D. Smith ?

No, I haven’t read it and would struggle to get round to it at the moment. But it looks interesting. I’d love to hear from anyone who has read it.

According to the blurb on Amazon, he argues that “today’s culture wars can be seen as a reprise of the basic antagonism that pitted pagans against Christians in the Roman Empire.” Two things. First, if that is the case, the historical process is reversed: Christianity is rapidly becoming history, as classical paganism was two thousand years ago. Secondly, one could argue that progressive secularism is more like the ethical rationalism (eg. Marcus Aurelius?) that would have replaced paganism if Christianity hadn’t got there first.

I may very well give it a read and get back to you on that.