davo: When the ordinary Jewish…
Mark Newton : What I don’t understand is…
Kevin Holtsberry: Very helpful summary. I…
Andrew: Thanks, for this, Richard…
Samuel Conner: Just starting into your new…
END_OF_DOCUMENT_TOKEN_TO_BE_REPLACED

In the form of a God: The Pre-existence of the Exalted Christ in Paul: what the book is about and why (2 comments)
Notes on J. Richard Middleton’s The Liberating Image: The Imago Dei in Genesis 1 (0 comments)
Our eco-theological blindspots and the climate crisis (0 comments)
Biblical hermeneutics and the destabilising of the world (0 comments)
END_OF_DOCUMENT_TOKEN_TO_BE_REPLACED

What is the chief end of man? Why the Westminster Catechism gets it wrong 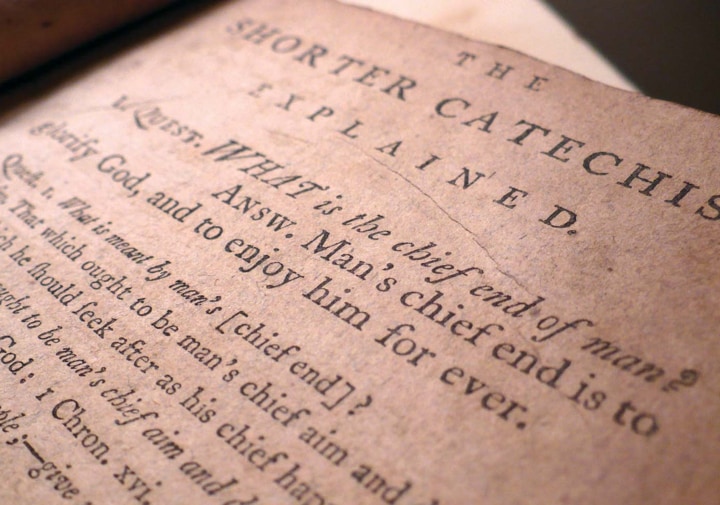 If the “chief end of man” is to glorify God and enjoy him forever, as the Westminster Catechism asserts in its opening clause, why is there no mention of this in the creation narratives? Eh?

Humanity is created, as male and female, and is instructed to fill the earth, subdue it, and assert dominance over all living creatures, as the image of God (Gen. 1:27-28). In the garden story, Adam is told not to eat the fruit of the tree of the knowledge of good and evil, but his purpose is only to work the garden and keep it (Gen. 2:15). He is not told to glorify God.

Adam and Eve are expelled from the garden because they ate from the prohibited tree. Procreation and agriculture continue to be their chief occupations, but they have become labours of hardship and pain.

Antediluvian humanity is destroyed not for failing to glorify God but because people corrupted the earth with violence (Gen. 6:11-13); and after the flood the original command to fill the earth and exercise mastery over all creatures is reiterated (Gen. 9:1-3).

Human activity becomes a more direct affront to God when a group of migrants settle on a plain in the land of Shinar and set about building “a city and a tower with its top in the heavens” (Gen. 11:4). But even then, nothing is said about worship, there is no idolatry in this proto-Babylon. The fear is that this group will become too powerful—politically and technologically—and “nothing that they propose to do will now be impossible for them” (Gen. 11:6).

To judge by this prehistory, therefore, the “chief end of man” was conceived almost entirely in social and economic terms: to develop agricultural societies across the face of the earth in response to a divine mandate, without resorting to violence or self-aggrandisement.

A kingdom of priests and a holy nation

At this point in the story, however, the creator God summons Abraham from the shadow of the proto-Babylon to be the father of a people who will eventually become a segregated priestly community in recognition of the fact that God delivered them from captivity in Egypt:

Now therefore, if you will indeed obey my voice and keep my covenant, you shall be my treasured possession among all peoples, for all the earth is mine; and you shall be to me a kingdom of priests and a holy nation. (Exod. 19:5–6)

Now at last we have a subgroup of humanity whose “chief end”—in part, at least—is to glorify God. As a new creation in microcosm Israel has also to multiply, fill the land, and cultivate it, without sinking into wickedness, without empire-building. But at the heart of Israelite society was the place of God’s presence and the highly disciplined work of the priests, which not only ensured the integrity of Israel’s social existence but enabled the nation as a whole—in the fullness of its social existence—to be a priesthood of the living creator God in the midst of the nations. How the whole complex social-religious process would work was set out in detail in the Law of Moses.

So it was not the “chief end” of the nations to glorify God directly. Rather, Israel would express and embody and enact the glory of God on behalf of nations which did not know him.

The “chief end of man” was conceived almost entirely in social and economic terms: to develop agricultural societies in response to a divine mandate, without resorting to violence or self-aggrandisement.

Ironically, it is when Israel failed to be a priestly and holy nation—failed to keep the Law—that the logic of this arrangement is most powerfully demonstrated. When YHWH bares his holy arm in the eyes of all the nations and acts to bring his people back from exile and restore ruined Jerusalem, “all the ends of the earth shall see the salvation of our God” (Is. 52:9-10).

“Your people shall all be righteous,” Isaiah writes; “they shall possess the land forever, the branch of my planting, the work of my hands, that I might be glorified” (Is. 60:21). The Shorter Catechism presents this as “proof” that the chief end of man is to glorify God, but this misses the point. YHWH will be glorified in this case by what he does, not by what Israel does, and certainly not by what humanity does. He re-establishes his people in the land that he promised to them, and by that action he gets glory for himself.

The breakdown of the priestly people arrangement, in fact, proves to be a game-changer.

Conversion of the nations

Some surrounding cultures become notoriously idolatrous—and dangerously so for Israel. Then the question of who is God, who is worthy of worship, who is in control of historic events, is posed much more sharply, and the realistic hope arises that one day the pagan gods will be abolished and the nations will turn to the God of Israel (e.g., Is. 45:20-23). In other words, the possibility that the nations—not Israel alone, but still not “mankind” in general terms—will glorify God really emerges as a matter of “eschatology.”

The Paul of Acts makes the point rather diffidently in Athens. The Greeks, at some point in the past, chose to worship the creature rather than the creator (cf. Rom. 1:21-23), but he believes that the instinct to seek God is ingrained in humanity, for which evidence can be found in the poets and in the altar to an unknown god (Acts 17:23-28), and he is in no doubt that this whole culture will come under divine judgment sooner or later (Acts 17:30-31).

This is where we end up, I think, if we follow the biblical vision through.

The proofs provided for Question One include Psalm 86:9, which expresses the conviction that “All the nations you have made shall come and worship before you, O Lord, and shall glorify your name”—because YHWH is great and does wondrous things. The vision is of Israel’s neighbours responding to the saving actions of YHWH by travelling to Jerusalem to worship him.

The vision was fulfilled, in rather different terms, when the nations of the Greek-Roman world abandoned their worthless gods and committed themselves to worship the one true God and to confess his Son as Lord—or to wait for the Son from heaven to deliver them from a hostile pagan culture (1 Thess. 1:9-10). And this stunning outcome, of course, brought immense glory to the God whom, until recently, Israel had served in the land as a priestly-prophetic people.

So here’s where the mistake was made…

The Westminster Catechism was written 1600 years later, at a time when it was easy to confuse the church with humanity as a whole, but this is not the biblical perspective. Nor, indeed, is it our perspective.

The New Testament church could imagine the nations of the Roman Empire turning from their idols to worship the living God, under the priestly ministrations of the churches. For a time the European churches could imagine the whole world being converted, but it was never going to be sustainable to project the demanding priesthood of the subgroup on to the whole of humanity. It was hard enough to discipline the fractious, combative churches let alone all “mankind.” Western churches evangelise now in order to slow decline, not in the hope of seeing mass conversion and a return to a Christian civilisation.

So churches are again beleaguered priestly-prophetic communities stranded in a largely indifferent or unsympathetic secular culture—and for that reason they have become, perhaps, more prophetic than priestly, counter-cultural. And a good thing, too.

We are no longer bound to think that the “chief end” of humanity is to glorify God and enjoy him forever. It is what it has always been, which is to manage communal life on earth peacefully, justly, and moderately. It is the task of the church to serve the interests of the creator as a priestly-prophetic people, occupying whatever space is made available, whether expansive and secure or narrow and precarious. To be sure, that task includes the “end” of glorifying God (cf. 1 Cor. 6:20; 10:31), but I rather think that the greater principle is that God gets glory for himself in the world by what he does in times of crisis.