Cleanthes’ “Hymn to Zeus” and the renewal of monotheism (4 comments)
Conversation with Mike Bird about In the Form of a God (0 comments)
Answering Mike Bird about the referent of "all things" in 1 Corinthians 8:6 (0 comments)
Interview: The Preexistence of Christ and Narrative Historical Theology (1 comment)
END_OF_DOCUMENT_TOKEN_TO_BE_REPLACED

The stones will cry out 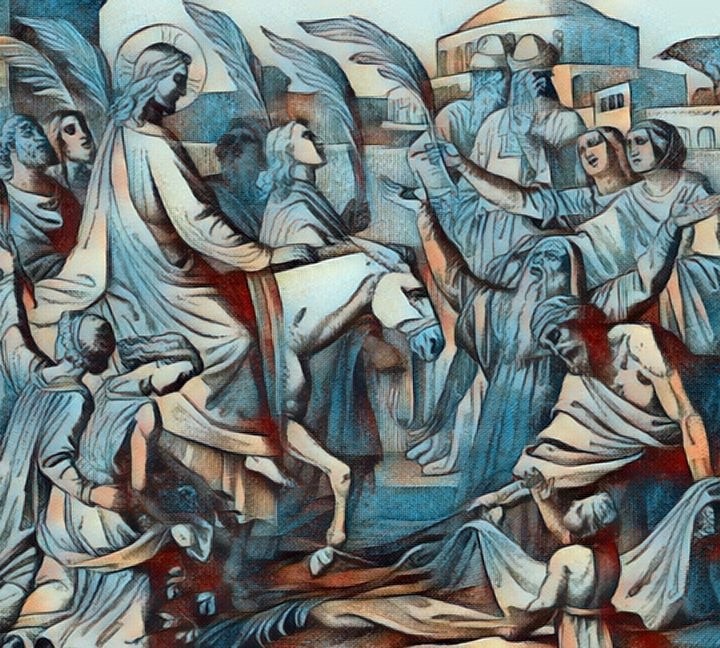 I have Daniel Hoffman to thank for this little aperçu.

Jesus is riding on a young horse (pōlon), perhaps awkwardly on a young donkey, descending the Mount of Olives towards Jerusalem (Lk. 19:37). There is no explicit reference to Zechariah 9:9, but presumably the allusion was not lost on Luke’s readers (cf. Matt. 21:4-6):

Rejoice greatly, O daughter Sion! Proclaim, O daughter Jerusalem! Behold, your king comes to you, just and salvific is he, meek and riding on a beast of burden and a young foal (pōlon neon). (Zech. 9:9 LXX)

A quite large crowd of Jesus’ followers begins to rejoice and loudly praise God concerning all the mighty works that they have seen. They proclaim the words of Psalm 118:26: “Blessed is the King who comes in the name of the Lord!” (Lk. 19:38).

To understand why, we need to hear the whole story of the psalm. The king is surrounded by hostile nations, but in his distress he calls on the Lord, who delivers him from defeat and death. “I shall not die, but I shall live, and recount the deeds of the LORD (Ps. 118:17). He is like a stone rejected by the builders, which has become the cornerstone. Therefore, he comes to the temple in the name of the Lord to make a sacrifice of thanksgiving.

The Pharisees take offence at this plainly absurd pantomime of Jesus’ arrival—or parousia—as a suffering but vindicated king. He is a “teacher,” no more than that, and he must rebuke his disciples. But Jesus responds, “I say to you, if these will be silent, the stones will cry out (kraxousin).”

Daniel Hoffman says: ‘I had always taken this as “the stones would cry out in praise if these people didn’t do it,” but I think it actually means “cry out in judgment against Jerusalem.”

I think he may be right.

Cleanthes’ “Hymn to Zeus” and the renewal of monotheism
Conversation with Mike Bird about In the Form of a God
Answering Mike Bird about the referent of "all things" in 1 Corinthians 8:6
Interview: The Preexistence of Christ and Narrative Historical Theology
How we got from kingdom to Trinity: Constantine and pagan monotheism
Jesus and Paul, works and faith
Some hazardous thoughts on the Trinity for a new year and a new era
Was it Roman custom for people to return to their home town for a census?
END_OF_DOCUMENT_TOKEN_TO_BE_REPLACED