davo: When the ordinary Jewish…
Mark Newton : What I don’t understand is…
Kevin Holtsberry: Very helpful summary. I…
Andrew: Thanks, for this, Richard…
Samuel Conner: Just starting into your new…
END_OF_DOCUMENT_TOKEN_TO_BE_REPLACED

In the form of a God: The Pre-existence of the Exalted Christ in Paul: what the book is about and why (2 comments)
Notes on J. Richard Middleton’s The Liberating Image: The Imago Dei in Genesis 1 (0 comments)
Our eco-theological blindspots and the climate crisis (0 comments)
Biblical hermeneutics and the destabilising of the world (0 comments)
END_OF_DOCUMENT_TOKEN_TO_BE_REPLACED

Biblical hermeneutics and the destabilising of the world 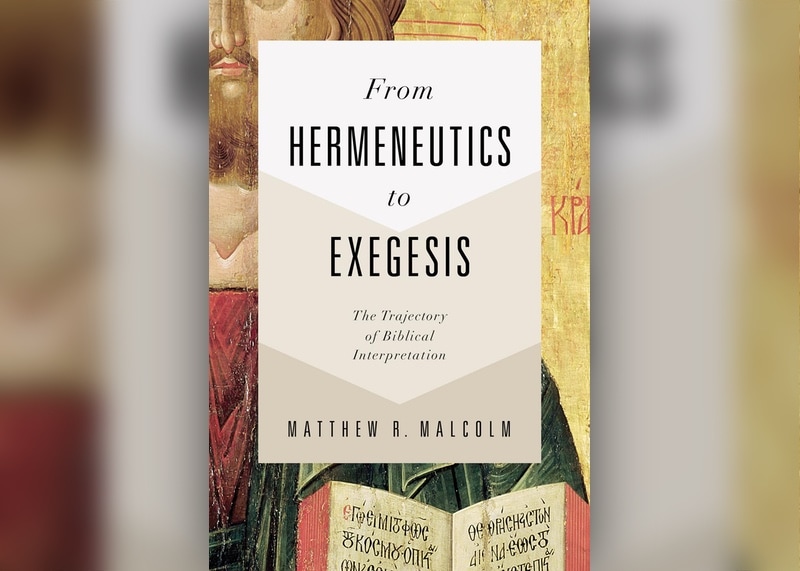 “It is a conviction of the church,” Matthew Malcolm writes in From Hermeneutics to Exegesis, “that it shares the same redemptive-historical location as the first recipients of the New Testament documents” (61). That is an important observation, but I think that the conviction is misguided, on three counts: 1) what the New Testament is about centrally is not redemption but “kingdom”; 2) the kingdom argument determines not a location primarily but a moment in time; and 3) we do not share that moment in time.

So I mean to disagree with Malcolm on central issue because I think his approach is too conventional. But I will say that as a general introduction to biblical hermeneutics this is not at all a bad book.

In the first part Malcolm provides a straightforward history of hermeneutics from Socrates to the present day, discusses the distinction between general and special hermeneutics, and puts forward a hermeneutical model for the practical task of exegesis.

He takes it that for Christian readers the goal of biblical interpretation is “ultimately that communities of hearers of God’s Word might become more Christlike” (80). At the heart of the hermeneutical model, therefore, is a “transforming engagement of horizons” in standard Gadamerian terms—the horizon of the text and the horizon of the reader. He then suggests that a “refining questioning” goes on between the two horizons at the four levels of realm, mission, emergence, and reception. Realm is really just context—first of the text, then of the reader. Mission is the “performative orientation”—let’s call it purpose—of the text and the aim of the reader. Emergence has to do with contingency: both text and reader belong to a particular place and time. Reception signals the fact that the “interpreter encounters the text at some point in its post-history” (84).

An invitation to a fictitious dialogue

Now let’s go back to the opening statement about a shared “redemptive-historical location.” This does not allow us to collapse the two horizons into one, but Malcolm argues that the sense of the metaphor is not that “there is a hermeneutical gap between those who are at a great historical or ideological distance from one another, but rather that all people and texts are located at a distance from one another.” He then suggests that this distance is not a problem, but an “invitation to respectful dialogue.”

That’s all very well in principle, I suppose, but it has the effect of downplaying the impact of historical distance. In hermeneutical terms, we read the New Testament in much the same way that we read modern texts. This is disingenuous, surely: it takes much more work for me to understand a letter of Paul as his first readers understood it than a letter written to The Guardian last week as other Guardian readers would understand it. The study of biblical hermeneutics should, if anything, aim at widening the perceived gulf between the two horizons, not minimising it.

The “invitation to respectful dialogue” metaphor makes matters worse. It give the impression that text and reader engage on equal terms, but that’s a fiction. The text is not in a position actively to challenge our understanding of it. The text cannot answer back and protest, “No, you’ve got me all wrong.” So it’s always up to the reader to allow the text to say what it wanted to say. That requires historical-critical imagination and self-discipline, and frankly, as a reading community, we are not very good at that.

So here’s a prime example….

The widely held view that a “redemptive-historical” narrative lies at the heart of the New Testament is mistaken. The controlling storyline that runs from the exile to Babylon to the overthrow of Babylon the great in Revelation 18 is better understood as “kingdom-historical.” The guiding prophetic-apocalyptic vision is of the establishment of the rule of the God of Israel over the pagan nations. In the pursuit of this goal redemption becomes a necessity—Israel needs to be saved from destruction, Gentiles need to be saved from a corrupt pagan civilisation that is passing away. But it is not the main point of the story.

Modern evangelicalism, I’m afraid, has got this fundamentally wrong.

There are three major shifts in the kingdom-historical storyline.

First, with the conquests of Alexander the Great in the third century BC the focus swings from East to West.

Secondly, as Rome becomes a more significant power in the region than Greece, the question of final political authority begins to take precedence over the theological problem of polytheism.

Thirdly, the destruction of Jerusalem and the temple makes the Old Testament political-religious hope practically untenable: YHWH’s rule over the nations will not extend from Mount Zion; rather, the Messiah who predicted the war against Rome and its catastrophic outcome, at the cost of his life, will rule in the midst of his enemies, seated at the right hand of God in heaven. But it is still a matter of rule fundamentally, not of salvation.

Well, no. What I have described is not a space but a narrative spanning the New Testament period. The kingdom of God is not a new way of living in the present; it is a vision for a new future. The destruction of Jerusalem and the temple is anticipated, but it will happen after the period of witness that is actually narrated in the New Testament. So it is not even the case that we our located in the same chapter as Jesus and the apostles. This is all the more true if we allow that the conversion of the peoples of the Greek-Roman world would constitute the next major development in the kingdom-historical storyline.

In fact, the conversion of the pagan empire is the climactic event that brings the kingdom storyline to its proper end. It marks the moment when the biblical people of God were no longer subject to the great superpowers of the ancient world. To the contrary, the nations would flock to the churches, scattered outposts of a heavenly Jerusalem, to worship the one true God, learn his ways, and extol the name of his Son.

This failure to grasp the kingdom-historical orientation of the New Testament has been the disappointment of Luke Timothy Johnson’s book Among the Gentiles: Greco-Roman Religion and Christianity, which I’ve also been reading. Johnson first describes Greco-Roman religion according to four categories of religiousness: 1) participation in divine benefits, 2) moral transformation, 3) transcending the world, and 4) stabilising the world. That seems to work pretty well, but he then attempts to do the same for Judaism and Christianity in the period, but his categories are then more notable for what they exclude than for what they include.

At least in the first century, both Judaism and Christianity were in large part prophetic-apocalyptic movements. What they hoped for was the destabilisation and destruction of the Greek-Roman oikoumenē and the institution of a whole new political-religious order. Jesus, after all, came not to bring peace but a sword (Matt. 10:34).

The other forms of religiosity that Johnson describes are dragged along behind by this driving kingdom-historical conviction. Divine benefits, the work of the eschatological Spirit, empower and sustain the eschatological community. Believers are required to exhibit in their present moral lives the values of the post-second temple Judaism, post-pagan age to come. Martyrdom is rewarded with a heavenly resurrection life and rule at the right hand of the first martyr Jesus.

It is only in this quite limited sense that we might speak of the goal of reading scripture as becoming “more Christlike”—to go back to Malcolm’s definition. The early Christian movement needed to be conformed to the image of Christ because the eschatological objective—ultimately the conversion of the pagan nations—would be achieved only through a radical faithfulness and suffering.

We now read the Bible for a much broader purpose—to learn what it means to be a priestly people of the living God in the post-Christian West, or wherever we find ourselves, under the lordship of Christ, in the power and instruction of the Holy Spirit.

Horizons do not only make it difficult to understand the other. They sometimes isolate us in more fundamental ways—as watersheds isolate river systems or oceans isolate ecosystems. Sometimes, what lies beyond the horizon is simply inconceivable, unknowable. Did any sane person in the biblical period imagine that one day humans would walk on the surface of the moon? Who foresaw the social normalisation of same-sex relationships? How many people warned of disastrous man-made climate change coming before the 1960s? How many before the 1760s?

The problem with Malcolm’s reduction of the distance between our horizon and the horizon of the biblical text is that it allows us to maintain the illusion that nothing has really changed. That is very unhelpful.