Juanita: Hi there Sam We spoke…
Andrew: David, many thanks for this…
David: And, for further reading, I…
David: There’s a substance to this…
Arthur Davis: That, I think, is the…
END_OF_DOCUMENT_TOKEN_TO_BE_REPLACED

Conversation with Mike Bird about In the Form of a God (0 comments)
Answering Mike Bird about the referent of "all things" in 1 Corinthians 8:6 (0 comments)
Interview: The Preexistence of Christ and Narrative Historical Theology (1 comment)
How we got from kingdom to Trinity: Constantine and pagan monotheism (2 comments)
END_OF_DOCUMENT_TOKEN_TO_BE_REPLACED

What do the Christmas stories tell us about the pre-existence of Jesus? 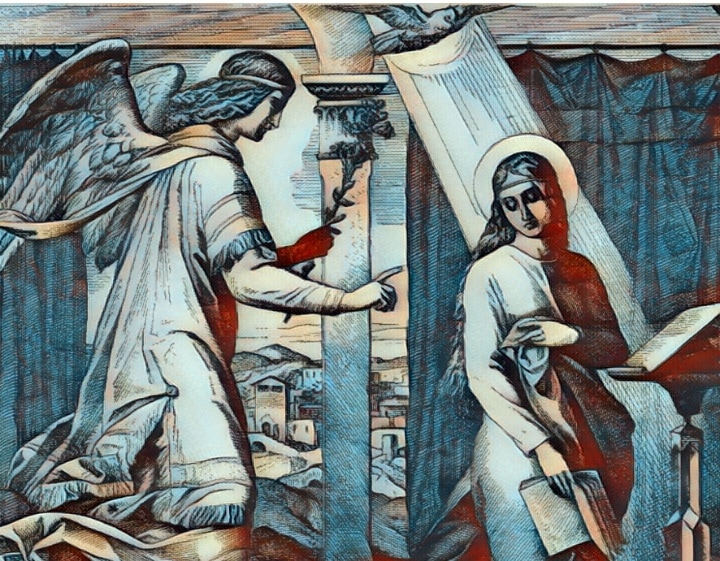 Having in the womb from…

Matthew traces Jesus’ descent back through David to Abraham (Matt. 1:1-17). He was born of Mary, whose husband was Joseph. The word genesis, used for the “origin” or “birth” of Jesus appears extensively in genealogical texts in the Greek Old Testament, going back to the “genesis of human beings” (Gen. 5:1) and the “genesis of the heaven and earth” (Gen. 2:4). The birth of Jesus is the last link in the long chain of the begetting (egennēsen) of the descendants of Abraham.

Luke’s genealogy, by contrast, is a catena of sonship: “being son, as was thought, of Joseph… of Adam, of God” (Lk. 3:23-38). It has been inserted between the declaration at Jesus’ baptism, “You are my beloved Son,” and the testing of this Spirit-inspired vocation by Satan in the wilderness: “If you are a son of God…” (4:3).

Before Joseph and Mary came together, Matthew tells us, she was “found having in the womb from (en gastri… ek) the Holy Spirit” (Matt. 1:18). This indicates the means or agency by which she became normally pregnant. There is no suggestion either that she had been impregnated by God after the manner of pagan liaisons between gods and women, resulting in a divine-human offspring, or that a divine person had surreptitiously veiled himself in flesh in her womb. There is no incarnation here, merely a miraculous and scandalous pregnancy, the significance of which lies elsewhere.

The story of Tamar’s sexual manipulation of Judah provides a couple of parallels—perhaps significantly, the only place in the Greek Old Testament where we have the expression “en gastri… ek” (“in the womb… from”). (This woman is not to be confused with the Tamar, daughter of David, who is unequivocally raped by her half-brother Amnon in the Bathsheba stories.) 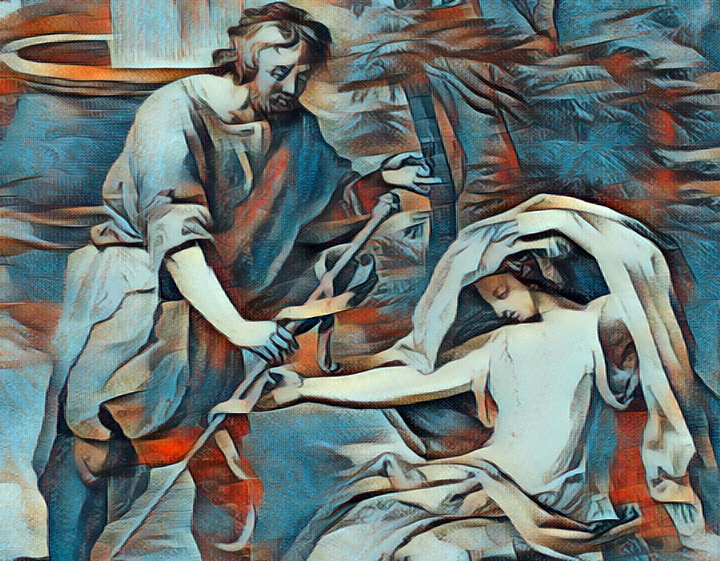 Judah is tricked into thinking that his daughter-in-law is a prostitute and he lies with her; and as a result she “received in the womb from (en gastri… ex) him” (Gen. 38:18). Three months later, word gets out that Tamar has become pregnant “from sexual immorality” (en gastri… ek porneias), and Judah pronounces hasty and merciless judgment on her: “Bring her out, and let her be burned” (Gen. 38:24). When she reveals to him that he is the father of the child, he reproaches himself, and “he did not continue to know her anymore” (38:26).

So Mary is “found to have in the womb,” just as Tamar was discovered to have in the womb, but she has become pregnant neither “from” Joseph nor “from” sexual immorality but “from the Holy Spirit” (Matt. 1:18). Joseph resolves—another loosely parallel detail—not to “know” his wife until the child is born.

We should also not miss the fact—I nearly did—that Tamar is one of the women of dubious reputation in Matthew’s genealogy (Matt. 1:3), along with Rahab, Ruth, and the wife of Uriah. She was on Matthew’s mind. All in all, it looks like the Tamar episode may be of more than incidental linguistic interest for our reading of Matthew’s account of Jesus’ conception.

An angel appears to Joseph in a dream and confirms the reason for her pregnancy; and he instructs him to give the boy the name Jesus, “for he will save his people from their sins” (1:20-21).

We are then advised by Matthew that this all took place to fulfil the words of Isaiah: “Behold, the virgin will have in the womb and will bear a son, and they will call his name Immanuel”; and Matthew adds that the name is translated “God with us” (1:23).

Isaiah, of course, did not prophesy the birth of Jesus. The birth of the boy Immanuel was a sign to king Ahaz that God was with his people at a time of national crisis: the Assyrians would deliver Judah from the threat posed by Syria and Ephraim but would then nearly overwhelm Jerusalem like a river in torrent (8:5-8). The boy does not go on to do anything useful; he is merely one of a number of curiously named “signs and portents in Israel from the LORD of hosts” (8:18).

It is difficult to know quite what Matthew meant when he said that “This whole thing came about in order that what was spoken from the Lord through the prophet might be fulfilled.” But the central point is that the remarkable circumstances of Jesus’ birth and his naming are likewise prophetically significant: the whole thing was a sign and portent in Israel that God was again “with his people” at a time of national crisis to save them from the sins that would in time bring military disaster upon them.

Matthew is not saying that God had come in flesh to be with his people or with all people. The son of Mary was no more God incarnate, as Matthew understood things, than was the son of the young woman in Isaiah’s circle, in the court of Ahaz, who gave birth to the boy Immanuel.

Son of the Most High

For Luke the significance of Jesus’ odd conception is not that he would save his people from their sins but that he would accede to the throne of David. The angel Gabriel appears to Mary, who is betrothed to Joseph, “from the house of David” (Lk. 1:27-28). She is told that she will “conceive in the womb and will bear a son,” and she will give him the name Jesus.

He will be great and will be called a son of the Most High and the Lord God will give to him the throne of his father David, and he will rule over the house of Jacob through the ages, and there will be no end of his kingdom. (1:32-33)

When Mary innocently asks how this will come about, since she is a virgin, the angel explains that “The Holy Spirit will come upon (epeleusetai) you, and the power of the Most High will overshadow (episkiasei) you; therefore, the one born will be called holy, a son of God” (1:35). The language again evokes the powerful and transformative presence of God in the midst of his people.

The coming of the Holy Spirit upon Mary both recalls Isaiah’s vision of the restoration of Jerusalem and anticipates the creation of a community of eschatological witness after the death of Jesus. What the Spirit does is make the birth eschatologically transformative. The child born to Mary will be “called holy, a son of God,” heir to the throne of his father David, eventually the Son of Man “seated at the right hand of the power of God” (Lk. 1:32-33, 35; 22:69-70). The disciples, consequently, will bear witness to the resurrected and exalted Son of God, who will judge and rule over nations.

And who knows, perhaps Luke imagined that Mary conceived in an ecstatic state of expectant lament, when the Spirit came upon her, similar to the experience of the disciples on the day of Pentecost.

It appears, therefore, that neither Matthew nor Luke thought of Jesus’ birth as the entering of a pre-existent person into the world. In his “encyclopaedic study of the doctrine of pre-existence,” now a little dated but insightful nevertheless, the Catholic theologian Karl-Josef Kuschel says that

He also discusses the distinction that Raymond Brown made in his commentary on the birth narratives between “conception christology” and “pre-existence.” In conception christology divine sonship begins with birth, and is therefore distinct both from adoption to sonship (in the course of Jesus’ life) and from sonship as a pre-existent relation to God. Christian theology, however, “soon harmonized the two ideas,” Kuschel says; so the pre-existent word became flesh in the womb of Mary. “The virginal conception was no longer seen as a begetting of God’s Son but as the incarnation of God’s Son, and that became orthodox doctrine.”

So what of this other paradigm—the pre-existent word of God becoming flesh in the conception and birth of Jesus?

According to John, the “word” that was at the beginning of something, that was with God, that was god or divine or God, through which all things came to be—this word “became flesh.” But when, exactly?

Traditionally, we have taken this to refer to the conception or birth of Jesus as the moment of “incarnation” in more or less realistic or meta-physical terms. 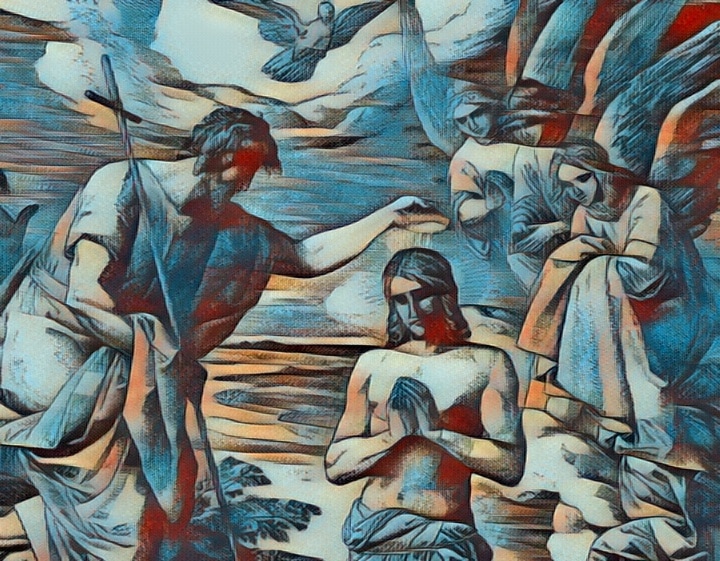 But there is no birth in the Prologue, no infancy, no childhood. After the opening statement about the word we jump directly to John the Baptist, who was sent by God to bear witness to Israel about the light, which was the life of people, which was in the word (Jn. 1:5-8).

The Jews mostly did not believe in his name, but to those who received him, “he gave to them the authority to become children of God, to those believing in his name” (1:12). In this new beginning, the darkness of Jewish disbelief did not overcome the light to which John bore important witness.

So the powerfully creative word of the living God, which is at least an echo of the original creation by divine fiat, bouncing off the cliff face of Jewish Wisdom thought, became flesh; and the disciples “saw his glory, glory as of an only son from a father, full of grace and truth.” Conceivably, given the context, this is a reference to the moment (note the aorist etheasametha, “saw”) of Jesus’ baptism: “You are my Son, the beloved, with you I am well pleased” (Mk. 1:11). Again, it is stressed that John bore witness about him (1:15). We are not allowed to forget the narrative setting.

So you have to wonder, at least, whether John means that the divine word, which is in some sense also the wisdom of God, became flesh when Jesus was baptised, when the project to replace the Law with grace and truth was initiated. It would be incarnation as mission rather than as metaphysics.

Have a happy and thoughtful Christmas.

Related content
Twelve important things to keep in mind about the Christmas stories
The conception of Jesus, Trinity, and the search for an appropriate metaphysics: it’s nearly Christmas, after all
Christmas now and then
The true meaning of Luke’s Christmas, part 6

Conversation with Mike Bird about In the Form of a God
Answering Mike Bird about the referent of "all things" in 1 Corinthians 8:6
Interview: The Preexistence of Christ and Narrative Historical Theology
How we got from kingdom to Trinity: Constantine and pagan monotheism
Jesus and Paul, works and faith
Some hazardous thoughts on the Trinity for a new year and a new era
Was it Roman custom for people to return to their home town for a census?
A Hindu asks a very good question about the death of Jesus and the salvation of Gentiles
END_OF_DOCUMENT_TOKEN_TO_BE_REPLACED