davo: When the ordinary Jewish…
Mark Newton : What I don’t understand is…
Kevin Holtsberry: Very helpful summary. I…
Andrew: Thanks, for this, Richard…
Samuel Conner: Just starting into your new…
END_OF_DOCUMENT_TOKEN_TO_BE_REPLACED

In the form of a God: The Pre-existence of the Exalted Christ in Paul: what the book is about and why (2 comments)
Notes on J. Richard Middleton’s The Liberating Image: The Imago Dei in Genesis 1 (0 comments)
Our eco-theological blindspots and the climate crisis (0 comments)
Biblical hermeneutics and the destabilising of the world (0 comments)
END_OF_DOCUMENT_TOKEN_TO_BE_REPLACED

New creation, Spirit, blessing and kingdom: a clarification of terminology

I have been rather bothered recently by the way in which the emerging church - though not only the emerging church - makes use of the concept of the ‘kingdom of God’ to define its mission, the idea being that the task of the church is to extend or build the kingdom of God on earth. Very often there is an implicit polemical aspect to the usage: we build the kingdom of God rather than merely convert people; or we are more concerned about the concrete social dimension of the kingdom on earth than the rarefied - if not mind-numbing - prospect of an eternity in heaven. The phrase ‘kingdom of God’ appears to capture for us something of the down-to-earth political and moral relevance of the gospel that we are so anxious to reintroduce into Christian discourse; and it gives substantial theological justification for this shift in missional focus. But I am not at all sure that this is how the term works biblically.

I have tried to think this through in a number of recent posts: see ‘New creation and the kingdom of God’, ‘NT Wright and the confusion of kingdom and new creation’, and ‘Getting frustrated by An Emergent Manifesto of Hope’. What brought me back to it again was a conversation with Greg Boyd last week in which he put to me the formulation that ‘kingdom’ is what protects or defends the new creation. I’m not suggesting that this is how Greg understands it himself, but I think it gets at something important.

What I want to do here, in light of that conversation, is attempt to clarify what seem to me to be the key terms in this debate and how they interrelate: new creation, life in the Spirit, blessing, and kingdom of God. The following colourful diagram presents the structure of the argument; it lacks, however, a narrative dimension and it may help to correlate it with the diagrams in ‘We have to go back, but not to square one’. 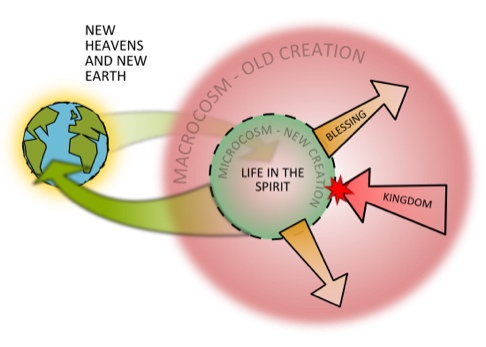 The foundational calling of the people of God was to be a new creation - an alternative to the corrupted macrocosm, in which the original blessing of Genesis 1:28 would not only be recovered but also transmitted to the nations of the earth. The creational promise is repeated to Abraham and his descendants: they will be blessed, God will make them fruitful and multiply them, and they will fill the land. In Isaiah the restoration of Israel following the exile is portrayed as a new creation (Is. 51:3; 65:17; 66:22). That restoration is ultimately realized in the renewal of the covenant and the gift of the Spirit in the New Testament. Jesus’ resurrection embodies the restoration of Israel, but it also anticipates the final renewal of all things. The church is a community of those who have, as Paul says, put off the old humanity and put on a new humanity. The final hope of the church is not to go to heaven (that may be an interim hope but I rather think not) but to be part of creation remade, no longer subject to wickedness, decay and death; and it is this prospect that fundamentally determines our identity and mission - hence the arrow in the background pointing back from the future ‘destination’ to the present existence of the people of God. We live and act in the light of the remaking of heaven and earth.

Life in the Spirit

In the Old Testament what gave shape and discipline to the creational microcosm of Israel was the Law. It stipulated the terms and conditions under which the people would experience the original blessing of creation: ‘And if you faithfully obey the voice of the Lord your God, being careful to do all his commandments that I command you today, the Lord your God will set you high above all the nations of the earth. And all these blessings shall come upon you and overtake you, if you obey the voice of the Lord your God’ (Deut. 28:1-2). When Israel persistently sinned, however, the Law pronounced not blessing but judgment, the outcome being a protracted state of ‘exile’ that lasted down to the first century and the appearance of John the Baptist in the desert.

Under the new covenant it is not the Law that gives shape and discipline to the creational microcosm but the Spirit of life - the power which raised Jesus from the dead, the power which will give life to the bodies of those who suffer with him, the presence of the living God in the midst of his people, the Spirit of prophetic expectation. The Law has been written in people’s hearts. This experience of the Spirit of life cannot be reduced to a narrow set of ‘charismatic’ distinctives: the whole of creational life in the microcosm must somehow be an outworking, expression, embodiment of the pressing reality of the creator God.

The microcosm exists in a complex relation to the macrocosm. Despite its original vocation Israel lived mostly in conflict with its neighbours, and second temple Judaism in the end was destroyed by the massive military force of Rome. The new creation in Christ has learnt how not to be bullied and victimized by the powers of the macrocosm - it has learnt to love, to forgive, to seek reconciliation, not to fear death - and so can afford to be generous. Insofar as the life in the Spirit of the microcosm has a positive impact on the old creation, the church mediates the original blessing to the nations and cultures of the world. But the same life in the Spirit must sharply set the new creation apart from the old, and in that respect the people of God will also be an offence, a challenge, a stone of stumbling to the nations and cultures of the world.

The kingdom of God

Israel becomes a kingdom when the people find that they need someone to go out and fight against their enemies (1 Sam. 8:20). The whole notion of ‘kingdom’ has to do with the problems that arise when the new creation people is placed in the midst of hostile nations - and specifically when those nations become agents of divine justice. You can’t create a garden in the wilderness and expect everyone to respect its boundaries. This is the kingdom question: Who is going to protect it? How is it going to be defended? And what will happen when the hooligans break in and wreck it?

The well known proclamation of Psalm 2:7 (‘The Lord said to me, “You are my Son; today I have begotten you.”’) comes as a response to the aggression of the nations: ‘Why do the nations rage and the peoples plot in vain? The kings of the earth set themselves, and the rulers take counsel together, against the Lord and against his anointed, saying, “Let us burst their bonds apart and cast away their cords from us.”’ We find the same context of conflict in another royal Psalm with critical christological significance:

The Lord says to my Lord: “Sit at my right hand, until I make your enemies your footstool.” The Lord sends forth from Zion your mighty scepter. Rule in the midst of your enemies! … The Lord is at your right hand; he will shatter kings on the day of his wrath. He will execute judgment among the nations, filling them with corpses; he will shatter chiefs over the wide earth. (Ps. 110:1-2, 5-6)

In Isaiah the good news announced to Zion that YHWH ‘reigns’ (Is. 52:7) has to do with deliverance of the people from captivity in a foreign country. Kingdom is given to the Son of man figure in Daniel 7:14 following a war between a pagan kingdom and the saints of the Most High.

The theme of the kingdom of God becomes prominent in the Gospels because Israel is again oppressed by its enemies. To speak of the coming kingdom of God is to speak of God acting soon to defeat Israel’s enemies, including, provisionally at least, satan and death, to liberate his people from their captivity, and to install Christ as king in defiance of Caesar. So it is when the accuser and oppressor of the saints has been thrown down that the announcement is made that the ‘kingdom of our God and the authority of his Christ have come’ (Rev. 12:10).

In my view it is a mistake to reduce this intervention to the cross and resurrection. The New Testament tells a longer story that culminates in the vindication or justification of the Son of man community against the pagan imperial powers that opposed it - that is, against Rome. But the main point to grasp is that the ‘kingdom’ language defines not the missional practice of the church but the action of God to safeguard the integrity and autonomy of his new creation people, not least when they come under attack from the nations and cultures that surround them. The kingdom is not something that the church builds but something that was announced. When Jesus teaches his disciples to pray ‘Your kingdom come…’, what he has in mind is not the mission of the church but the coming transformation of Israel’s circumstances - the defeat of Israel’s oppressors, the restoration of the people, and the giving of the kingdom to the Son of man.

So I would argue - and I hope I’m not just splitting hairs - that ‘mission’, if we must call it that, arises out of the existence of the people of God in the midst of the nations and cultures of the earth as ‘new creation’, shaped and disciplined by the Spirit of life. At the interface between the microcosm and the macrocosm blessing happens. When the integrity or even the existence of the microcosm is contested, whether from within or from without, the conviction comes to the fore that the creator God will always act sovereignly, as king, to judge or redeem or liberate his people. The garden in the wilderness remains vulnerable: new creation is a risky endeavour. But it is defended by the one who has been given all authority, who must reign until all his enemies have been subjugated (1 Cor. 15:25).

Yet another annoying interruption/diversion to an on-going discussion, which could merit a separate section on this site, headed: ‘Golden Moments from the Postost Archives’, or something similar. The discussion following the excellent original post at http://www.opensourcetheology.net/node/1506 was a lot of fun, and, I thought, illuminating. At least, it illuminated me, but may have irritated others.