Andrew: Aaron, thank you for your…
Matthew: Thank you Aaron.  Your post…
Aaron Milavec: Let’s assume, for a moment,…
Aaron Milavec: When you ask, “Is this the…
Andrew: Good reading list, by the…
END_OF_DOCUMENT_TOKEN_TO_BE_REPLACED

Multifaith Matters podcast: my conversation with missiologist Michael Cooper about the narrative-historical method (0 comments)
What is the essence of Christianity? (6 comments)
How does the New Testament predict the future? (0 comments)
Who will be taken? Who will be left behind? Darn it, we’re all too late anyway! (2 comments)
END_OF_DOCUMENT_TOKEN_TO_BE_REPLACED

The unfamiliar face of Jesus

There is a classic image of Jesus that has predominated in Christian artistic traditions – a tall figure with long wavy, almost effeminate hair (because he’s worth it!) and beard, sorrowful eyes, white robe, and the original Jesus sandals. We do not imagine that this representation amounts to a real likeness: it is no less an icon, and only marginally more human, than the stylized productions of the Orthodox churches.

The other way in which we admit that we have much less interest in the appearance of the historical Jesus than in his social or political significance is by over-writing, in very postmodern fashion, the singular Jewish person with a diversity of contemporary identities, usually drawn from the ranks of the oppressed, marginalized and disenfranchized: Jesus the African-American, Jesus the asylum-seeker, Jesus the woman, and occasionally Jesus the Jew.

Some years back the BBC made a series called Son of God, in which Jeremy Bowen tried to find out who the historical Jesus was. The most compelling thing about the programme was the startling – indeed, startled – image of Jesus that they came up with (above). They used forensic and archaeological techniques to reconstruct a plausible face based on the skull of a first century Jewish male. It is still speculative, but it has an unprepossessing realism to it that helps to anchor the theological imagination in the murky sea-bed of history. 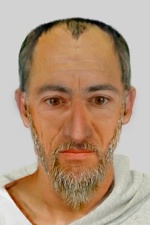 Wikipedia has a ‘facial composite’ image of a similarly realistic but more sophisticated apostle Paul. It was produced by the Landeskriminalamt of North Rhine-Westphalia using historical sources – and you can’t help wondering whether they’ll ever track him down. Paul is described in the Acts of Paul and Thecla (2nd century AD) in less than flattering terms as ‘a man little of stature, thin-haired upon the head, crooked in the legs, of good state of body, with eyebrows joining, and nose somewhat hooked, full of grace: for sometimes he appeared like a man, and sometimes he had the face of an angel’.

What started me down this track was a surprising passage in Eusebius’ Church History, in which he describes a statue of Jesus that he had seen in Caesarea Philippi. The story was that the woman with the flow of blood whom Jesus healed (Mark 5:24-34) came from this city. At the entrance to her house there was a bronze statue of a woman, kneeling, stretching out her hand, and a second statue of a man ‘clothed in a handsome double cloak and reaching his hand out to the woman’. Eusebius had been led to believe by the good – and no doubt shrewd – residents of the city that the statue ‘resembled the features of Jesus’. He then comments:

It is not surprising that those Gentiles, who long ago were benefited by our Saviour, should have made these things, since I have examined likenesses of his apostles also – Peter and Paul – and in fact of Christ himself preserved in colour portrait paintings. And this is to be expected, since ancient Gentiles customarily honoured them as saviours in this unreserved fashion. (Eus. Eccl. Hist. 7.18)

There is not much we can do with this information. It’s a pity Eusebius did not record the physical appearance of the images that he saw, though his recollection would carry no more historical weight than the description of Paul in the apocryphal Acts of Paul and Thecla. But it helps to demythologize these figures, including Jesus, who have become so idealized in our minds that we forget that they shared in the common unexceptional humanity of the largely unknown multitudes who flock the streets of a distant past.

What is the essence of Christianity?
How does the New Testament predict the future?
Who will be taken? Who will be left behind? Darn it, we’re all too late anyway!
Resurrection in the Old Testament: literal or metaphorical?
END_OF_DOCUMENT_TOKEN_TO_BE_REPLACED