Andrew: I wonder, though, if we don…
Samuel Conner: Thank you, Andrew; this is…
Andrew: Esther, thanks for this. It…
Esther: Quirky doctrines now found…
Andrew: Esther, I presume that the…
END_OF_DOCUMENT_TOKEN_TO_BE_REPLACED

New Perspective and Reformed theologies at a crossroads

Jim Hoag has a couple of pertinent questions about my “Postconservative evangelicalism and beyond” post—pertinent, in fact, to the point that he makes me wonder whether the piece had much in the way of substance to it at all. The first question has to do with what we understand by the “New Perspective”, the second with my nifty but perhaps vacuous metaphor of a narrative-historical hermeneutics cutting across the “dominant paradigms of modern theology at ninety degrees”.

The New Perspective—associated principally with writers such as Sanders, Dunn, Hays, and Wright—is a rather loose category that is going to mean different things to different people.  It is also a work in progress. It started out largely as an attempt to correct the very negative presentation of Judaism as a religion of legalistic works-righteousness that has held sway over much New Testament interpretation and theology. But since this was essentially a historical correction, it has given a powerful impetus more broadly to research into the historical setting and scope of Paul’s argumentation. In effect, it has done for Paul what successive quests for the historical Jesus have done for Jesus.

I would place recent imperial-critical research (Crossan, Horsley, Lopez) in this trajectory, though it has a habit of going off at a tangent; and my own argument in The Future of the People of God is that Paul’s thought in Romans is governed by a forward-looking narrative about the place of the emerging churches of the nations in a troubled process that effectively culminated in the victory of Christ over the gods and powers of the Greek-Roman world.

Douglas Campbell has some excellent things to say regarding how the “superstructure” of a theological theory (such as Justification theory) may distort or overwhelm the reading of the “base”—the primary texts—on which it was originally constructed. The poor donkey of scripture gets overloaded with a weight of self-substantiating theory that it simply cannot sustain.

We have seen that in the case of a scripturally constructed and authenticated explanation the reading is prior and fundamental; it generates and then supports the explanation as base to superstructure.

The images below are tarted up versions of Campbell’s diagrams (238). In the first one the base of the texts properly supports the superstructure of theory—Campbell is careful not to pretend that we can dispense with “theology”.

But the theory—the superstructure—proceeds to take on a life of its own:

But the resulting theory, once established, possesses its own integrity and coherence…, to the point that it is largely detachable from its underlying texts.

Then, of course, what happens is that for all sorts of complex sociological and historical reasons the theory comes increasingly to “intrude prematurely into the act of reading that supposedly undergirds it” (The Deliverance of God, 237, Campbell’s emphasis)—quite understandable, but “epistemologically disastrous”. Campbell then goes on to describe how “Any illegitimate epistemological causality flowing from the superstructure to the base may be cloaked in a variety ways” (238)—a covert art that we are all remarkably adept at.

So in this second picture the epistemological current has been reversed: the theoretical superstructure, which I have taken the liberty of enlarging to indicate its oppressive function, controls the reading of the base texts, with potentially distorting effect. 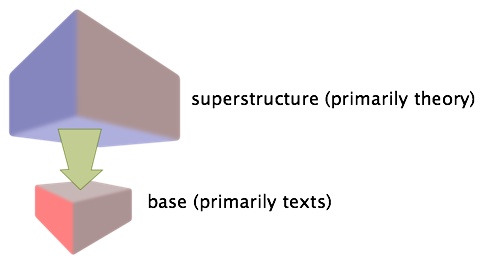 So when I suggested that the “New Perspective ﻿offers us the best chance of ensuring that in the process we remain loyal to scripture”, what I had in mind was its capacity to swim against the current of an ‘illegitimate epistemological causality”—to resist the distorting effect generated by the sociological success of currently dominant paradigms.

The slightly fuzzy New Perspective topples the bullying theological theory and lets scripture speak with its own voice again (this is purely my contribution to the schematics): 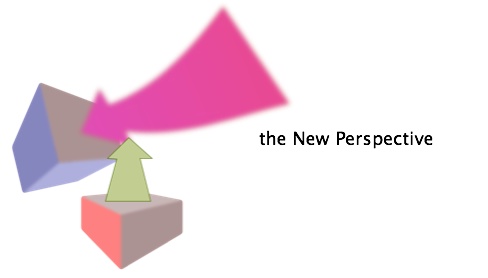 The question will then be whether a constructive and credible tension can be maintained between an appropriate historical-critical methodology and an authentically and potently evangelical commitment. I am confident that it can.

My way of dealing with this challenge would be to foreground the narrative structure of New Testament thought, as the locus at which history, literature and theological argumentation converge. A narrative-historical methodology makes us ask different questions; it pushes context into view; it forestalls theological precommitments; it makes the text strange again; it safeguards the contingent dimensions of the texts; it identifies real and urgent rather than remote and speculative concerns; it grounds language in corporate experience; it has an ear for scriptural and cultural resonances; and so on…

The theology that emerges from this hermeneutical realignment ought to retain a narrative shape and momentum. It will have a diachronic structure—theology as an active, critical, prophetic, hopeful engagement with historical realities in the light of earlier moment in the story. That is a very different model to the largely synchronic function of systematic, conceptually organized, modern theologies (Calvinism, Arminianism, modern evangelicalism, etc.) which, as Campbell points out, effectively pre-empt biblical interpretation. The metaphor of narrative-historical interpretation at ninety degrees to the traditional paradigm attempts to capture that realignment, which of course is just another metaphor, maybe just the same metaphor, for this complex hermeneutical shift—and so it goes on.

My own view is that modern theological paradigms cannot in the long run survive the emerging critique—I think the phrase “vindication of an eschatological community through faithfulness” simply gets at the core of Paul’s argument in Romans much more accurately than the Reformation axiom about the justification of lost individuals by faith. But it will certainly be a long run, and there is no reason in principle (practice is always another matter) why the transition should not proceed by way of dialogue rather than conflict and schism.

Thanks for this presentation.  I do find the issues circulating between the first two illustration needing to be overcome.  But it doesn't seem that we can really push to superstructure out of the way (as in your third illustration) to make room for the text to speak. I think this is impossible, even in, or rather, especially in a postconservative/postfoundational perspective.

It seems that instead of pushing out the superstructure we need to have two arrows pointing up and down (or maybe for you, adding an arrow forward toward the future of the people of God, indicating that the text and superstructure are actually leading us somewhere).  There needs to be more of a feedback loop between the two that creates a mutually corretive situation.

I always worry that those calling for a "return" to the text w/o superstruture, to allow the text to be heard simply and clearly (I know this isn't exactly what you are calling for) actually have a very large, but unacknowledged, (hermeneutical) superstructure which believes text can speak alone.

Also, doesn't theological interpretation of the narrative, especially with such diverse texts as we find in the scriptures.

Anyway, thanks for the good post, and i'm got your new book in the mail.  looking forward to it.

Geoff, you’re absolutely right. Having the New Perspective kick Reformation theologies out of the way was a bit facetious, and it’s certainly illusory to think that we can read the text without a mediating theological superstructure. But that’s not to say that some rather fundamental shift in worldview or paradigm may not be in the offing. Moreover, there are inevitably transitional superstructures—compromise modes of thought that allow us to explore and test new ways of reading.

I must say, though this could be merely a matter of personal vanity, I tend to think that current developments are leading towards a more accurate and more transparent reading of the texts—and that we should pursue such interpretation just for this reason. But then a different set of problems arises. The more we recontextualize the scriptures historically, the harder it becomes (at least apparently) to have them them speak directly to us. We then are likely to find ourselves in a very pluralistic but creative situation as we develop new ways to bridge the gap that we have opened up.

thanks for the response.  yeah, for the record, I too am very appreciative of the New Perspective, and think that it is offering great insights to theology in our contemporary situation.  I feel that same for the recovery of apocalyptic themes (although these often are played against narrative perspectives inappropriately). I would love to hear your thoughts on how to relate these oft opposed streams: narrative vs. apocalyptic.

What you mentioned is true in that the closer we read a text the harder it becomes to know how to apply it, which leads us into the the recently describes need for theological interpretation, but not an interpretation which overrides the text.  We need an ad hoc hermeneutic (a missional hermeneutic) of Scritpure which connects the strands without cuts unwanted ones off.

DIAGRAMS!! What a help! This post brought such clarity (though I am very capable of misunderstanding what I think to be “clear“). Lots of helpful, utilitarian concepts like the necessity of "the base of the texts properly supporting the superstructure of theory because if not, theory—the superstructure—will proceed to take on a life of its own". Seems similar to the idea of a systematic (one with predetermined categories) demanding you read a particular theology back into the text…one e.g. where historical context is for the most part excluded; superstructure bullying text.

I tried applying some of the ideas of how theory—the superstructure—proceeds to take on a life of its own and how it becomes largely detachable from underlying texts after watching a supposedly burgeoning “revival” on You Tube, one currently “exploding” in Alabama. Afterwards I was talking to some folks about the Christendom model of revival and the need for some sort of “transitional pneumatology", a new perspective, one without predetermined “revival categories”.

On the “You Tube” segment, there was a lot of rhetoric about it being a book of Acts experience with a book of Acts relevance. Yet in this attempt to re-live (reproduce or imitate) a book of Acts “outpouring”, what actually seemed to be happening (at least to me) was a totally inauthentic expression. I know I digress but it may be like how a text is undermined because what was written to deal with immediate circumstances, say, of the first century church is lifted over their heads to the church beyond their historical horizon. And, in this case, a form of “revival” has achieved a life of its own and one perpetually imitating itself. It is a “bullying theological theory” in that the contingent dimensions of the text are no longer safeguarded. The reading of the base text is now controlled by the strength of that currently dominant “revival” paradigm. What you get is anachronism, and in this case, one that boldly ignores any presupposition of trajectory.

You said, “My own view is that modern theological paradigms cannot in the long run survive the emerging critique….” That’s not only encouraging, it's necessary. Thanks Andrew and please, let me know if you think I've got the wrong take on any of this or any thoughts you may have.