Paul’s statement in Romans 3:21-26 that the future justification of God has been revealed in anticipation in the present time through the faithfulness of Jesus for all who believe is clearly of central importance for our understanding of “salvation” in Paul. Discussion has centred for the most part on the twin loci of the genitive phrase dia pisteōs Iēsou Christou (“through faith in Jesus” or “through the faithfulness of Jesus”?) and the soteriological terms apolutrōsis (“redemption”) and hilastērion (expiation/propitiation).

There is, however, a more fundamental question, partly disclosed by the debate over the meaning of the genitive phrase, that needs to be brought to the surface and clarified: What exactly is spoken about by means of the soteriological metaphors? What story is being reinterpreted or redescribed by the language of redemption or atonement? Is it a story about the salvation of humanity that happens also to include Israel (this is Douglas Campbell’s surprisingly conventional assumption) or a story about the salvation of Israel that is found to have implications for humanity? 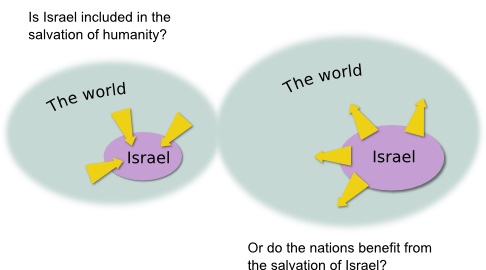 My view is that the modern universal perspective is actually alien to Paul’s way of thinking, that his argument is bound up with an apocalyptic outlook that consistently has in view the historical existence—and more importantly the survival—of the people of God through a tumultuous period symbolically determined as a “day of wrath”. I won’t go into all the exegetical details here: the argument is set out in The Future of the People of God, for those who are interested; but I will highlight a few points.

First, some general observations. The Old Testament language of “wrath” and “righteousness of God” always has in view historical circumstances that impinge on the existence of Israel. Paul sets his argument in Romans against a background of engagement with the synagogues, on the one hand, and the Greek-Roman oikoumenē, on the other. Much is said in the Letter about the suffering of the communities as a result of persecution: this is an apocalyptic theme. Romans 9-11 clearly locates the soteriological argument within a realistic concern about the historical fate of Israel—and it is worth noting that Paul expresses nothing like the same anxiety regarding the “salvation” of the rest of humanity. Romans 13:11-14 speaks unmistakably of an impending eschatological crisis that should not be disconnected from the earlier statements about salvation, particularly given the importance of Habakkuk 2:4 for the development of Paul’s argument. And in Romans 15:8-13 Paul constructs a soteriological narrative that makes Christ a “servant to the circumcised… in order that the Gentiles might glorify God for his mercy”: as the angel informed Joseph, Jesus will save his people from their sins (Matt. 1:20-21), and this act of salvation will be made known to the nations.

Secondly, it is important to keep in mind that Paul is making the argument at a particular point in the narrative. He has a perspective on the future: I think he had premonitions regarding the Jewish war, the brutal persecution of the churches; and he was theologically convinced that Christ would eventually gain the victory over paganism. But he does not have the benefit of our hindsight. He addresses these issues prior to the rationalization of New Testament thought that took place with the progressive assimilation of scripture into a Hellenistic and eventually Christendom worldview. The modern interpreter has to forget a great deal in order to read Paul as an apocalyptically-minded Jewish-Christian apostle of YHWH confronting the spiritual and moral bankruptcy of his own people and the challenge that a massively powerful imperial paganism presented to his belief in the fundamental right(eous)ness of Israel’s God.

Thirdly, Romans 2:1-3:20 has to do with the problem of Israel’s sin and the failure of the Jews (particularly in Paul’s mind here the Jews of the diaspora) to practise the Law that they purported to teach to the Greeks. Paul believes that Israel’s God is no longer willing to overlook this failure, and the Jews as a consequence face a “day of wrath”. This narrative is set against a larger narrative about the nations at a number of points: i) Paul believes that the resurrection of Jesus is evidence that Israel’s God also intends to “judge” the pagan world; ii) he believes that in a quite realistic, sociological sense righteous Gentiles will put unrighteous Jews to shame on the day of wrath; and iii) he puts forward the anthropological argument that the Jews, despite their possession of the Law, have shown themselves to be as much under the power of sin as the rest of humanity. But the important point to grasp here is that we arrive at Romans 3:21 with this critical thought at the forefront: if God is to “judge” the pagan world and so be justified before the nations, he must first hold the Jews accountable for their failure to provide a benchmark of righteous—so the Jews cannot complain that it is unfair for God to inflict wrath on them (3:1-20).

It seems to me, therefore, that what is at stake in Romans 3:21-26 is not the salvation of people in general but the salvation and establishment of a community that will go on, in the face of severe opposition, to provide the necessary benchmark of righteousness against which the God of Israel will judge the pagan world. This “salvation” is grounded in the “faithfulness” of Jesus who pioneered (cf. Heb. 12:2) the way of suffering and vindication for the eschatological community. It is redescribed by means of Old Testament metaphors (perhaps drawn from the Exodus narratives, certainly recalling the Day of Atonement ritual) that speak of the redemption of Israel. The argument reflects narratives in Isaiah according to which the restoration or salvation of Israel following the exile is understood in different ways to have an impact on the nations. The accounts of the deaths of the martyrs in very similar terms in the Maccabean literature (2 Macc. 7:37-38; 4 Macc. 17:20-22) are relevant here because they demonstrate how this language and this sort of narrative have a natural reference to Israel’s story.

At this stage in the argument the response of the Gentiles to the righteous action of Israel’s God is interpreted in rather limited terms, according to an essentially Jewish apocalyptic narrative controlled by Old Testament antecedents. So, for example, Paul says in Romans 15:9, in thoroughly thoroughly Isaianic terms, that the nations will glorify YHWH for his mercy towards Israel. Certainly Gentiles are “saved” from the judgment of the ancient pagan world by their inclusion in that community of restored Israel that would find life in the age to come—through whose faithful and long-suffering witness, moreover, the “root of Jesse” would come to “rule the Gentiles” (Rom. 15:12). But this is a very different conceptuality to our modern understanding of the salvation of humanity through faith in Jesus Christ.