Is the global church following the Western church over the edge?

Phil Wood, who writes an Anabaptist blog from the UK, made this comment yesterday in response to The Church is dead?:

I was talking a little while ago with a friend who has a senior role in an American Mennonite Conference. We had a long discussion when I said that in Britain we were ahead on the Post-Christendom curve but what’s UK today will be US tomorrow. Britain is the oldest industrialized country in the world. I don’t think it’s a surprise that so many of these trends (the breakdown of community too) have their origins here. Whether the decline virus is 100% communicable is another question. If I were being hopeful I would say that before the curve reaches the vibrant churches of the global south we might have learned a thing or two about being Christians without Constantine.

We could picture the current state of affairs in this way: the UK church is in the front carriage of a train that has already been pulled over the precipice into catastrophic decline by the runaway engine of secular rationalism; the church in the US is not far behind, and anyone leaning out of the window will see what is coming; but the global church is still some way back, thoroughly enjoying the ride. 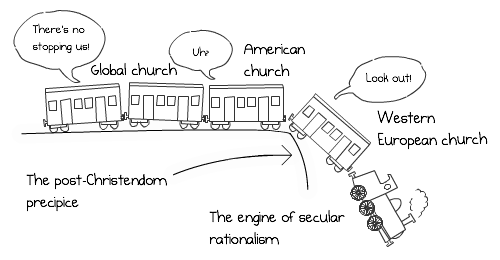 On the whole, I think I share Phil’s hope that a chastened and reconstructed Western church will have something useful to teach the global church as it approaches—in its turn—the post-Christendom precipice. This is what I so like about the Amahoro Africa movement, which, with support from people like Brian McLaren, is helping to nurture a much more just, honest and holistic vision for the church in post-colonial Africa. But there are some obvious problems with this model.

First, it’s difficult not to hear anti-imperialist alarm bells ringing as soon as we suggest that the Western church has something to teach the global church, no matter how traumatized, chastened and humbled we may have been by our hair-raising ride over the edge.

Secondly, it’s not at all clear that history always runs in straight lines. On the face of it, you’d think that the cultural forces which have dragged the Western European church into decline are so strong that the American church and the global churches are bound to follow sooner or later. But the contexts are very different, and we should probably not just assume that everything is coupled to the engine of secular rationalism like carriages in a train. As Phil suggests, the decline virus may not be 100% communicable—or the American and global churches may, in different ways and to varying degrees, have been immunized against it by the tragic experience of the European church. But we are wrecking the metaphor here…

Following on from that point, thirdly, we have to consider the possibility that the global church will survive and thrive simply by disconnecting itself from the forces of secular rationalism and pursuing a way of uncritical faith, in defiance of the intellectual and theological difficulties that so beset the Western churches. That’s what’s believed where I worship. Who knows?

I agree with your concern abot the echoes of imperialism and colonialism that may be unintentionally present in Western church movements that try to teach and assist churches in other parts of the world, but I have to hope that the transfer of ideas and experience is not just one way.  Relatively recent history suggests that there is some evidence to support this.

For example, it is now fairly comonplace to acknowledge in our western churches that God is on the side of the poor.  The rediscovery of this Scriptural perspective came from Latin American Christian praxis, not from US, UK or European academic theology.  However, once Liberation Theology took root in the minds of some Western theologians and church leaders it found fertile ground and has led to developments in African-American theology (although surprisingly there does not seem to be a UK or European equivalent to this) and Feminist theologies, to name just two.

Maybe, just maybe the Western church will become sufficiently humbled to realise that we do not have all the answers.  We don’t even have all the questions.

Of course, if we continue in our spirtual arrogance and ignorance, then our churches will continue to decline and die.  If this is the path that we choose, then we deserve no better.

I think the very fact that the global church (when I say that I mean places in Latin America, China, Korea, Africa, etc…) is expanding rapidly shows us that it has something to do with their somewhat fideistic mentality. I say “somewhat” because they often times have “reason” to believe; the reasons often enough are things like miracles and so on.

It’s truly something about their child-like faith and full acceptance of the entire Gospel message (not just soul saving) that I think allows the Spirit of God to flourish in such powerful ways.

Daniel, do you think that there is any chance that the Western church might recover that “child-like faith”? No doubt there are many Christians in the West who would claim that they never lost it.

Andrew, there is something else I forgot to mention. The social materialism that permeates western society is huge in the decline of the church. The reason why the church is flourishing in such powerful ways in third world countries is because Jesus is all they’ve got.

Between this and the child-like faith, I think there is paradigm in which we can flourish.

I do hope and pray that the Western church does recover this mentality. Now, for this to happen, I don’t think we need to become pre-modern people. Though, I do think the pervasive materialism, for the church to flourish, will need to die in the church. Whether we will see this happen or not, who knows. I pray so.

The reason why the church is flourishing in such powerful ways in third world countries is because Jesus is all they’ve got.

It’s ironic, then, that in so many of these places churches think they have a Jesus who will give them the health, wealth and prosperity—the social materialism—that permeates western society.

I agree with you about the impact of materialism. I tend to see it as a sign of the success of the secular-rationalist method. Rationalism, unhampered by the constraints of religion and tradition, has made us such effective producers that we have had to become gluttonous consumers in order to keep up: excessive supply has generated excessive demand. If it was all demand-driven, we wouldn’t need advertizing.

But the impact on the church is not only in terms of numerical decline. It has seeped in. It has turned the rather austere evangecalism of the post second world war era into a thinly sanctified mirror of the consumerist culture in which we live.

Western churches must cease trying to reinvent the wheel and accept  traditional Christianity.

What is “traditional Christianity”? Let’s start with Apostolic succession, the seven sacraments, the authority of bishops in matters of discipline and faith, the value of Sacred Tradition. We lost our child-like faith when we started questioning these basic tenets of Christianity.

According to the diagram I’m posting this from the train wreck.  As it happens I think there are merits to the train analogy as it’s not pressed too far.  I think there two things I would like to say briefly.  The first is that there is life at the bottom of the cliff.  The second is a hope that churches of global south and north will develop an increasingly reciprocal relationship.  In the Mennonite world we’re celebrating the appointment of Cesar Garcia of Bogota, Colombia as the first general secretary-elect of the Mennonite World Conference.  Cesar will be the first Mennonite from the global south to take up the role.  Many of us are thinking that this is a hope sign of things to come.

I would concur, given the amount of money and effort spent to replicate American/Western style Christianity to the rest of the world, I think they are headed the same way we have and are going.

Where is the God of history in this...