davo: When the ordinary Jewish…
Mark Newton : What I don’t understand is…
Kevin Holtsberry: Very helpful summary. I…
Andrew: Thanks, for this, Richard…
Samuel Conner: Just starting into your new…
END_OF_DOCUMENT_TOKEN_TO_BE_REPLACED

In the form of a God: The Pre-existence of the Exalted Christ in Paul: what the book is about and why (2 comments)
Notes on J. Richard Middleton’s The Liberating Image: The Imago Dei in Genesis 1 (0 comments)
Our eco-theological blindspots and the climate crisis (0 comments)
Biblical hermeneutics and the destabilising of the world (0 comments)
END_OF_DOCUMENT_TOKEN_TO_BE_REPLACED

Post-Christendom and the global church

A substantial gain to be had from reading the New Testament narratively rather than simply theologically is that the approach allows us to describe a meaningful continuity between the outlook of the New Testament and the subsequent history of the people of God. So, for example, it seems to me that key eschatological trajectories that arise in the New Testament land not beyond history but at critical moments in the foreseen experience of the church—most importantly, the Jewish War and the conversion of the empire.

One consequence of this change of perspective is that the European church and the age of European Christendom are significantly implicated in our interpretation of the New Testament. I think this narrative focus puts us in a much better position to resolve our current post-Christendom dilemma, but we also have to consider how the global church fits into the story. This post is a sketchy and very superficial attempt to integrate the experience of the non-Western church into the argument about the symbolic and theological significance of the collapse of Christendom.

Writing the global church into the story

1. I have emphasized the situation of the church in the West because it is the direct descendant of European Christendom and embodies the theological reversal of the victory of Christ over the gods of the old Greek-Roman world. The Western church has lived through—and barely survived—the conflict with secular rationalism over the last two centuries, and is now going through the painful but in many ways energizing process of constructing for itself a new post-Christendom identity. How do we now re-assert as community, from a position of cultural and intellectual weakness, from the margins of the modern world, the cosmic sovereignty and significance of the Creator God that was established through the New Testament narrative of suffering and vindication?

2. With very few exceptions—and allowing for varying degrees of indigenization—the church outside the West is the product of a narrative of Western imperialism, both sociologically and theologically. In that respect it may be seen as an appropriate symbolic extension of the Christendom paradigm: it represents in concrete political form the claim of the Creator God, in the name of Israel’s resurrected king, over the whole earth, beyond the oikoumenē and beyond the purview of the New Testament. It is indeed instructive, therefore, as Scott Lencke suggests, to view what is happening in China and India as a “carbon copy” of the book of Acts (see also “After Christendom, before meltdown”).

3. To the extent that the non-Western church is the product of Western expansionism, it presumably carries much of the theological and ecclesiological DNA of European Christendom, and so in principle is as vulnerable to the destructive and demoralizing forces of modernity and post-modernity as the church in the West has been.

4. It is also apparent that the struggle of the non-Western church to redefine itself after colonialism parallels in many respects the struggle of the Western church to redefine itself and its place in society after Christendom. This certainly strengthens the case for thinking that the global church is caught up—more or less self-consciously—in the same basic paradigm shift as the church in the West.

5. The perspective of the global church on this whole process, however, is rather different—and perhaps radically different—for at least two broad reasons. First, the global church has shared in the experience of oppression by the West: it is the product of colonialism, but it is embedded in societies that were very much on the receiving end of aggressive Western expansionism. Secondly, the global church has quite different cultural and intellectual traditions to draw on as it endeavours to reshape itself after colonialism.

6. The fact that there are vigorous churches flourishing across the world under the terms of traditional theological paradigms does not, in my view, obviate the need to rethink the theological infrastructure of Christian existence. It is not a coincidence that the recovery of narrative-historical origins lies at the heart of new theological perspectives at a time when the Western church is so unsure of its place in the world. But strictly speaking, the emerging paradigm—and its critique of traditional models—should stand on its own exegetical merit.

7. So, in my view, some form of narratively constructed theology will serve the church better, as it makes the difficult journey away from Christendom in search of a new paradigm, than traditional theologies, including Reformation theologies, constructed under the social and intellectual conditions of the old order. The question that arises here is whether the church as a whole can change ship in the middle of a storm without the loss of the evangelical life and energy that we currently see around the world. My guess is that the transition will happen inevitably over time because the new perspectives are so compelling exegetically and theologically, but I do not expect it to be a straightforward process by any means.

8. But we should also consider here what role the post-colonial church might play in the theological renewal of the Western church. On the one hand, there are issues of Western hubris and self-importance to face up to. There is a sense in which the Western church has narrative priority in this whole argument; but it is also true that the global church, for a multitude of reasons, confronts the Western church with the essential arrogance of its imperialist heritage. On the other, the global church may be sufficiently removed from the Western tradition to provide invaluable critical and creative insights for the renewal of theology.

This suggests a modification to the simple diagram I presented in the post about ‘The prophetic relationship of the people of God to the “land”’. The global church is presented as an extension of the imperial Christendom paradigm, but its very different journey may allow it to feed challenging new perspectives back into the conversation. The question then will be whether the self-absorbed Western church is willing to listen. 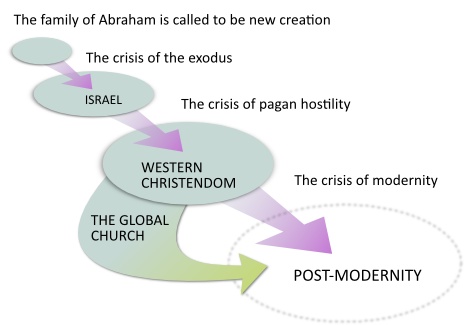 Alternatively, the energetic global church may simply continue on its march, skirting round the collapse of Christendom and leaving the Western church to struggle through the epistemological and moral morass of post-modernity, with the single-minded, uncritical determination to be the faithful church of the future: 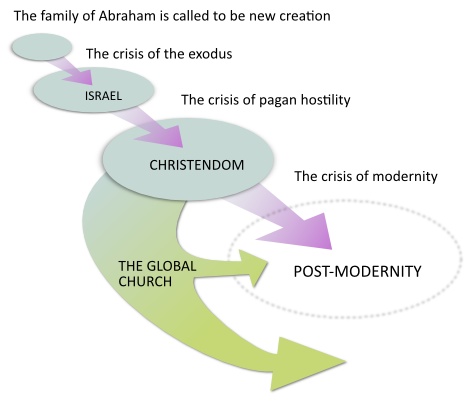 Thanks for this post, Andrew. I do believe it gives good insight into what you see with the global church being affected by and also having the opportunity to affect the western church.

I would have to really think through some practical points on how the global church can help the western church rethink our faith for the 21st century. I am no bigot to say it cannot nor will not happen. I am just wanting to see how they can influence us beyond the 'obvious'. One thing I would love to see is that we open our ears to their theological input. I am not sure American evangelicalism would be willing to listen to the theological input of the 'developing' world.