Scripture as the (historical) theological interpretation of history

This is a fundamental dilemma facing biblical hermeneutics: how do we get from scripture as ancient religious text, which is at one level at least unquestionably what it is, to scripture as Word of God for the church today, which at one level at least is unquestionably what it needs to be? Arguably it is the most serious dilemma currently facing biblical interpretation. 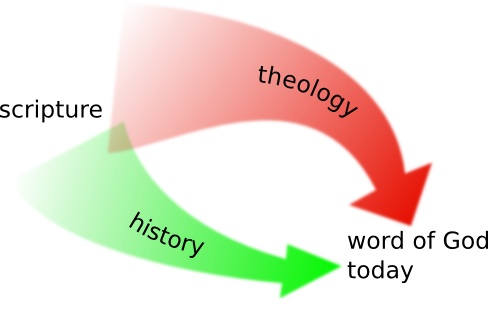 Theological interpretation has largely been of the opinion that consistent historical readings will not generate a viable, evangelical Word of God for the church—and it has to be said that the evidence for the most part has supported that opinion. Therefore, history must first be assimilated into theological interpretation, which usually means theological tradition, and in effect de-historicized, before it is may be permitted to address the church. 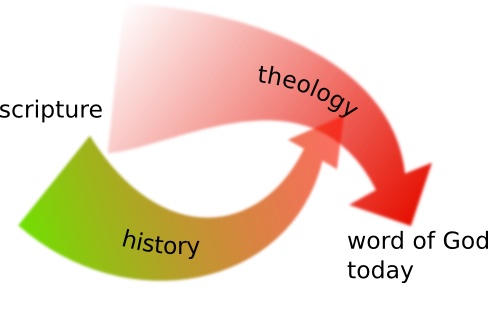 I would argue, however, that historical readings are in and of themselves theologically significant and capable of addressing the church today with the force of the Word of God. What makes this possible is the fact that scripture is already the theological—and more particularly prophetic—interpretation of history. 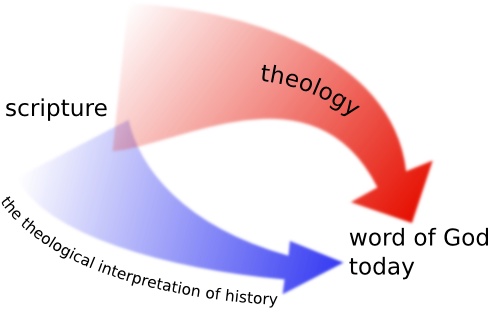 This argument would probably lead us to modify Campbell’s base-superstructure model. The base is not merely text waiting to be interpreted theologically. It is already a theological engagement both with prior texts and—retrospectively and prospectively—with history. It speaks as Word of God now because the church is an extension of that engagement. This does not mean that we have no further need for theological constructs that transcend or disregard the contingencies of history, just that we do not need to be protected from history in the interests of theology. Indeed, I would suggest that by grasping the evangelical force of the historical narrative we potentially unleash theological creativity because we do away with the need for dogmatic restraints.

See also:
Putting the theological cart before the biblical horse
How does God speak to us through an ancient text?
New Perspective and Reformed theologies at a crossroads

Of course, then that makes us ask questions of how to handle the NT, which is already Christ-new covenant centred. So how do we read and apply the text today, which you are asking here?

I see these words of yours definitely directing your understanding and writing on Romans: ‘I would argue, however, that historical readings are in and of themselves theologically significant and capable of addressing the church today with the force of the Word of God. What makes this possible is the fact that scripture is already the theological—and more particularly prophetic—interpretation of history.’

I hope to post my book review of your book on Romans this coming week, also with some questions. ;)

Scott, I’m not sure I follow your question, but I think the point is not that a Christ-centred hermeneutic followed a grammatical-historical hermeneutic (or vice versa, for that matter), but that the rise of historical criticism greatly exacerbated a latent disjunction between various theological readings of the text and the underlying historical contingency of the narrative. A Christ-centred reading would only be one of many theological readings. We might list Trinitarian, Pentecostal, Calvinist, fundamentalist, dispensationalist, and no doubt hundreds more. In any of these readings there is an unavoidable tendency (because of the demand for coherence) to obscure or distort both the details of the narrative and its contingency—its engagement with the particular moments and movements of history.

This highlights a further problem with theological readings of the New Testament—the arbitrary nature of their organization. How do we choose the defining centre, the organizing principle? In all likelihood it will be some extrinsic theological requirement, such as the Reformers’ debate with the Roman church, or Pietism’s reaction against formalism, that will determine theological priorities. This is not a bad thing, but it is bound to bend the text to some degree. Historical criticism is an attempt to unbend the text again. We cannot hope to restore its original condition, but we ought to be able to correct major distortions.

I look forward to reading the review. Thanks for engaging with the book.

Thanks for your follow up comment. I understand more where you are coming from. As to this question - How do we choose the defining centre, the organizing principle? - I guess I see the Christotelic-new covenant as the central perspective, but even that calls for theological explanation. So I understand what you mean with these words: Historical criticism is an attempt to unbend the text again. We cannot hope to restore its original condition, but we ought to be able to correct major distortions.

This is what you and the N.T. Wright are trying to do more with the text in regards to Romans, rather than letting covenant-reformed theology (and reactions against the RCC) determine what the text says.

Interesting discussion. And though I doubt this comment directly connects, I think it will share in some aspects of the post. What I’m just starting to get a glimpse of is “metalepsis”, a word Andrew used some time ago and one I had to look up. One definition said it like this, “Metalepsis is a rhetorical/poetic device in which one text alludes to an earlier text in a way that evokes resonance’s of the earlier text beyond those explicitly cited”. Maybe you can translate that for me Andrew but it seems like you must go back and examine the wider contexts in the scriptural “precursors” (O.T., etc) to understand the figurative effects produced by the intertextual conclusions.

Maybe I Cor.10:11 will help me explain all this; it says “These things happened to them and they were written for our instruction on whom the end of the ages have met”. Maybe here is where Paul’s eschatological hermeneutic informs his reading and application of Scripture. He is calling the Corinthian church to understand that they live at the “turning point of the ages”, so that all the Scriptural narratives and promises be understood to point toward to the crucial/impending eschatological moment in which he and his churches find themselves. His eschatological reasoning calls upon the Corinthians to perform a complex imaginative act. The prospect of apocalyptic judgment, symbolized by the destruction that came upon the idolatrous Israelites in the wilderness hovers over the entire passage. Paul invites his listeners/readers in Corinth to undertake the broad metaphorical leap of finding their own circumstances figured in the narrative. Wow. What an interplay of Scripture, history, theology and apocalyptic eschatology! Andrew, am I seeing this with any clarity whatsoever? (Also, the diagrams, keep them coming!).