Helge Seekamp: Dear Andrew, This short…
davo: When the ordinary Jewish…
Mark Newton : What I don’t understand is…
Kevin Holtsberry: Very helpful summary. I…
Andrew: Thanks, for this, Richard…
END_OF_DOCUMENT_TOKEN_TO_BE_REPLACED

In the form of a God: The Pre-existence of the Exalted Christ in Paul: what the book is about and why (2 comments)
Notes on J. Richard Middleton’s The Liberating Image: The Imago Dei in Genesis 1 (0 comments)
Our eco-theological blindspots and the climate crisis (1 comment)
Biblical hermeneutics and the destabilising of the world (0 comments)
END_OF_DOCUMENT_TOKEN_TO_BE_REPLACED

The prophetic relationship of the people of God to the “land”

One of the questions that came out of the recent discussion of the Beatitudes has to do with the place of the land in the eschatological restoration of the people of God. I suggested that Jesus’ promise to the “meek” was that they would inherit not the “earth” but the “land”—gē can mean “earth”, but the context makes “land” much more likely. The Beatitudes presupposes a narrative of judgment on Israel, which leads precisely to the question of who should inherit the land that has been judged—if it has been taken away from the unrighteous, whom will it be given to?

But this may lead us to wonder why renewed Israel, the community defined by the Beatitudes, “never really inherited the literal land”. Arguably Jesus was thinking quite literally of his followers, along with disciples from amongst the diaspora (cf. Matt. 28:19-20), being gathered together ﻿in the land (by the angels sent out by the Son of man) following the destruction of Jerusalem and the temple. That might be an intriguing line of thought to pursue: is there anything in the Gospels to suggest that Jesus expected his “church” to take root amongst the Gentiles in the way that it did?

I would be more inclined, however, to read Jesus’ promise to the meek symbolically—﻿to suppose that it it serves principally to restate the constituency, rather than the location, of restored Israel. It is not the Pharisees or chief priests who will inherit the kingdom, who will form the new people of God, but the disenfranchised, those who mourn over the wretched state of Israel, the meek, those who hunger and thirst for righteousness, and so on….

In any case, by the time we come to Paul, the expectation is that the descendants of Abraham through faith will inherit the world﻿ (Rom. 4:13), so the underlying vision of a righteous people living in the land has clearly been extended. The modern church has rather lost sight of the symbolic function of its relationship to the land, which is no doubt part of the reason why its environmental witness has been so poor.

To help refocus the question, therefore, I propose the following schematic and greatly over-simplified account of the symbolic function of the relationship between the people of God and the “land”. It tracks the paradigmatic nature of the people as a sociological entity embodying new creation as it is reformed after each crisis. The exile is excluded only because, although traumatic, it led to a reaffirmation of the national paradigm. The schema leads to a question: What sociological form does new creation take under the conditions of post-imperialism and post-modernity? 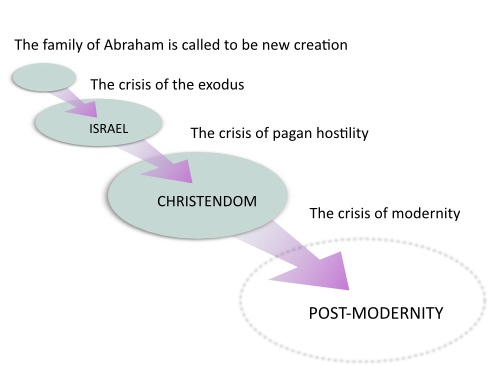 Israel’s existence in the land was integral to its function as a sign of new creation—a just people in a relationship of shalom with YHWH, with one another, and with the land. Abraham is told, in transparently creational terms, that he will be blessed, that he will be made fruitful, that his descendants will multiply, and that they will fill the land that God would give them. They will be a world in microcosm. But as a small cantankerous nation surrounded by aggressive pagan empires (Egypt, Assyria, Babylon, Greece, Rome), its capacity to fulfil that prophetic function was always compromised and was finally terminated by the war against Rome.

It was a key component of Paul’s gospel, however, that the God of marginal, beleaguered, compromised, and soon-to-be-defeated Israel was now asserting a claim over the whole of the pagan world and in principle, at least, over the whole earth—asserting a claim on the basis of the resurrection of Jesus, who had been appointed judge over the oikoumenē, over the empire. This is what Paul meant when he spoke in Romans about God being shown to be righteous—at least, it is the end-point of that eschatological trajectory.

But just as Israel represented the presence and purpose of the Creator by means of its presence in the land, the emerging community of renewed Israel represented the claim of YHWH over the oikoumenē—on the one hand, by the inclusion of Gentiles in the covenant community, and on the other, by its physical expansion across the empire. The presence of these communities stood for the subversive, judging, and ultimately redeeming intention of Israel’s God vis-à-vis the old pagan order of things.

That transitional and transformative prophetic presence, however, led eventually to the Christianization of the empire—again, a concrete, political demonstration of the sovereignty of the God who had re-asserted his righteousness with respect both to Israel and the world by raising Jesus from the dead. The descendants of Abraham had indeed inherited the “world”. For the next 1500 years the people of God embodied its existence as new creation, as an alternative humanity distinct from both Judaism and paganism, largely as empire, geopolitically, culturally and intellectually.

There are important ways in which this needs qualifying, but European Christendom was, in effect, Israel writ large—new creation upgraded from small nation to large empire, with the power eventually to project the sovereignty of the God of Abraham across the whole world. Now I do not dispute that this was an ambiguous, flawed, and over-ambitious project. Historically speaking, and perhaps theologically speaking, the church was little better than Old Testament Israel. It certainly had its internal prophetic critics and dissidents, just as Israel did.

Thankfully the concrete expression of new creation as empire is now more or less over. The people of God is once again in transition, once again in search of a new paradigm by which to embody in itself the Abraham vocation to recover the original blessing of creation. The conditions of our existence in the world have changed no less dramatically than was the case with the termination of second temple Judaism.

We are again in the wilderness, again in exile, again struggling to redefine our presence in the world. It took the people of God 300 years to make the painful journey from failed nation to empire; it may take us just as long to make the journey from failed empire to… well, what? What now is the eschatologically appropriate form of the church’s existence in the world? How do we now position ourselves, construct ourselves, as a sign of the abiding potential of new creation? How do we physically, through the life of community, articulate the dynamic and compelling presence of the Creator in a post-imperial, globalizing context?

I had written a while back on the land of Israel in the new covenant, taking the line that the new covenant promise for God's people is that of a renewed heavens and earth.

You said: 'In any case, by the time we come to Paul, the expectation is that the descendants of Abraham through faith will inherit the world﻿ (Rom 4:13), so the underlying vision of a righteous people living in the land has clearly been extended.'

I am a bit confused, because I remembered in The Future of the People of God, you argued that, to embed this statement of Paul's in the historical narrative, that this doesn't speak of the 'world'. But I would have to look at the pages again.

By the way - nice charts these days on the nice new blog layout.

The discussion is on page 91. According to the Old Testament background the descendants of Abraham would inherit the land. There is some Jewish evidence for an expansion of this hope to encompass the “earth” (1 En. 5:7; Jub. 32:18-19), which may have influenced Paul here; but it is just as likely to have been a natural development from his conviction that YHWH intended to judge the oikoumenē through Jesus.

But I also argue that much of the language that we take to be universal and final in its scope—notably the language of wrath—derives from Old Testament texts that warn of wrath primarily against Israel. Perhaps that contributed to the confusion.

What now is the eschatologically appropriate form of the church’s existence in the world? How do we now position ourselves, construct ourselves, as a sign of the abiding potential of new creation? How do we physically, through the life of community, articulate the dynamic and compelling presence of the Creator in a post-imperial, globalizing context?

Do you take a stab at answering these question in your Re: Mission book?

Now that would have been a good idea! Unfortunately not. Re: Mission was basically a more comprehensive retelling of the biblical story from the narrative-historical perspective. It worked with the new creation theme and attempted to demonstrate how that was worked out under the historical-eschatological conditions envisaged by the New Testament. It did not explore in any great detail how the church lives now in the light of that narrative. That still needs to be done.

Yes, it would be great to hear more of your answers to those questions.

Perhaps it centres in the emerging conversation that has been going on for some 15-20 years?

By the way, have you read much of Peter Rollins? I just began his book this week, How (Not) To Speak of God. Good thoughts so far in the first 15 pages.

This was very helpful.

The throne of Jesus and the throne of God
Why did Jesus instruct his disciples not to preach the kingdom of God to Gentiles and Samaritans?
James Tabor’s failed failed apocalypse of the New Testament argument
“Image of God” as eco-theological premise?
Why did the Jews accuse Jesus of making himself equal to God?