jasonc65: Kevin, You are all over the…
Andrew: I think it’s possible that…
Kevin Bravo:  We’ve all sinned, but Jesus…
Peter: Since ancients believed new…
Samuel Conner: Just today, before reading…
END_OF_DOCUMENT_TOKEN_TO_BE_REPLACED

Making Jesus small again (5 comments)
The throne of Jesus and the throne of God (0 comments)
Christendom, exile, and the kingdom of God (2 comments)
Answers to questions about hermeneutics, history, and hell (1 comment)
END_OF_DOCUMENT_TOKEN_TO_BE_REPLACED

Three ways to put ourselves in the story

In the whole story

Traditionally, we have tried to live in the whole New Testament narrative. We understand that the story of the church begins at Pentecost, but we assume that the teaching of Jesus to his disciples and the teaching of the apostles to the churches may be merged together to form a single narrative about the early expansion of Christianity and an integrated body of doctrine that will see us through to the end, when all New Testament eschatology will be fulfilled. There is no narrative differentiation. It is all just one big blob of teaching.

In part of the story

This paradigm has been modified recently under pressure from New Testament studies. (For a bit of background, you might be interested in an entertaining piece by Anthony Le Donne called “Post-Third Quest Quirks; or, Have We All Stopped Medicating?”). People like Tom Wright have argued that before Jesus is the beginning of the church’s story, he is the fulfilment of Israel’s story. This has brought the historical events of the war against Rome and the destruction of Jerusalem and the temple in AD 70 into view, and we are more likely now to recognize the historical uniqueness of the situation faced by the community of disciples in Judea. But although there has been some recognition at the same time that the proclamation of the early churches that Jesus is Lord was an act of political defiance, there are no further events of eschatological significance between AD 70 and the end-of-the-world. The church today, therefore, lives in the narrative of the apostolic church.

In both these paradigms we are encouraged to find our place place directly in the New Testament narrative. My argument has been, however, that the narrative-historical approach that we see in Wright’s model should be applied more consistently, more aggressively, because Jewish apocalyptic—and by extension Jewish-Christian apocalyptic—always envisages not only the historical renewal of Israel but also the decisive victory of YHWH over the nations which opposed Israel. [pullquote]The fulfilment of Israel’s story in the death and resurrection of Jesus does not mean that we then enter a changeless theological happy-ever-after.[/pullquote] The narrative keeps going, pushing past the destruction of Jerusalem, through the vindication of the churches of the empire, into Christendom, and beyond…. 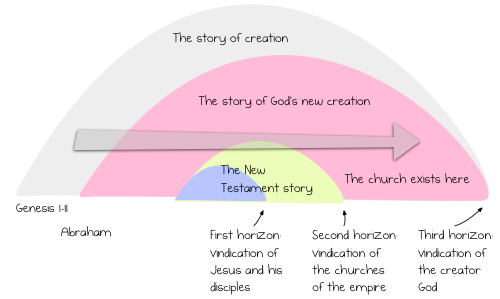 It is this narrative unfolding in history which means that the New Testament remains formative and authoritative for the church today. The redemption of God’s people through the death and resurrection of Jesus, through the emergence of an obedient martyr community, through the events of AD 66-70, through the long confrontation with paganism, has made the church today what it is—just as the drawn-out, traumatic exodus journey was critical for the formation of Israel’s historical identity. That gives us ample reason to read the New Testament.

But I would also stress that moving beyond the historical horizons of the New Testament only puts us back in the overall biblical story about a people called in Abraham to be God’s new creation in the midst of the nations until a final restoration of all things. This seems to me to be a major advantage of the narrative-historical approach. It is a way of reclaiming the whole biblical narrative without reducing the Old Testament to the status of a more or less disposable historical preface to the theologically important stuff of the New Testament.

It is a way of reclaiming the whole biblical narrative without reducing the Old Testament to the status of a more or less disposable historical preface to the theologically important stuff of the New Testament.

Love this. Thank you for the posts. Blessings.

Assuming for the sake of argument that they were correct, the writers of the New Testament adopted through their religious tradition an organization of history where there was “this age” and “the age to come”.  They expected a clear end of the old and entry into the new at some climatic point in the near future.  How do you reconcile that with your diagram?

As far as Wright’s comments go,  I think you are right that he’d say, “there are no further events of eschatological significance between AD 70 and the end-of-the-world.”  This sounds suspiciously similar to the parenthetical church age paradigm of dispensationalism.  Dispensationalism has to adopt that gap so that Israel’s national destiny can start back up again since it hasn’t already been completely finished in their view (otherwise the resurrection would be past, etc.).  In other words, God can’t be done with Israel because not all of their eschatology has been fulfilled, so though we have the age of the church now, we have to return to their timeline to finish the Biblical narrative.  Wright seems to be saying (and possibly you as well, but less directly) that most of Israel’s eschatology is done with but we still have that last little bit to go (the end of the world).  Or, do you think he’s saying (or are you saying?) that Israel’s program is done so that there is no more of their eschatology to unfold, so now we are just waiting on the end of the world, which we deduce will eventually happen per astronomy or some other science?

Good questions, Doug, which really need a lot more time than I can give them at the moment. One critical issue, it seems to me, is to what extent we suppose that Jesus and the authors of the New Testament were influenced by apocalyptic traditions beyond the scope of the Old Testament.

The Old Testament envisages a dramatic transformation of Israel’s historical fortunes in the world—return from exile, restoration of Zion, defeat of enemies, pilgrimage of the nations, etc. I don’t think that the Old Testament has an end-of-the-world in view.

Much Jewish apocalyptic really presupposes the same basic narrative but presents it in a heightened literary form, but there are texts which probably speak of a cosmic transformation at the end of the age—an end-of-the-world scenario, though the imagery is never easy to pin down.

I don’t think there is anything in the New Testament which cannot be accounted for on the basis of the Old Testament. So I would argue roughly that for Jesus and the authors of the New Testament the end of the age would mean a final resolution of the problem of Jewish rebelliousness, the ending of “exile”, the renewal of the covenant, judgment on the oppressive empire, the participation of Gentiles in the restoration of God’s people. The age to come would be the age of the renewed people of God, filled with the Spirit, subject to Christ as king.

The age to come, or world to come, as understood by the Hebrew then and today consisted of the age that followed the physical ressurection of the dead ones. It by no means took place in any point of history.  It dealt not with a change of order, as Doug is assuming, by meaning that what traspired in 70 AD was that change. The Age to Come, according to Mosaic and Rabbinic Judaism onto Modern and Orthodox Christianity, comprised of a world that was relative to a renewed cosmos.

How are you defining the renewed cosmos and on what scripture are you basing your opinion?

Based on the physiological example in Christ when He rose from the dead…i.e. 1st Corinthians 15 and the likes.

I’m happy to do this via private email because I anticipate that the exchange is going to be long, but I’d like to at least clarify my question.  I wasn’t trying to dig into the resurrection portion of your position.  I am more interested in your opinion on the renewed creation in general.  I’m curious about what scripture you use to justify the belief that the physical cosmos is inherently corrupted and in need of replacement, and what the conditions of the world after the replacement would be.

If you click on my name it will take you to my website. There you will find an exhaustive foundation to my positions.  Please feel free to contact me there or at Preterist Debate (google it) where we can interact better, since you think this may be long :)

BTW — Andrew, I see your “coming of the son of man” is now in print.  Thanks for doing that and I will pick up a copy as soon as possible.

I wanted to add that what I think may be being missed here, and Andrew, I believe you get very close to this conclusion through your narrative-historical hermeneutic, is that Hebrews in general, pre-Rabbinic “apocalyptic genre” as you like to call it, lends itself to multifaceted appraoch to the themes.  The writers and poets engage in a ”proleptic genre” as I like to call it (sometimes referred to as historical presents), which detail past, present, near and far term eschatologies all in one place.

Making Jesus small again
The throne of Jesus and the throne of God
Christendom, exile, and the kingdom of God
Answers to questions about hermeneutics, history, and hell
Whose names are written in the book of life?
How “liberal” is the narrative-historical method?
Katherine Shaner on the danger of singular saviours
In the likeness of sinful flesh: some reflections for Holy Week
END_OF_DOCUMENT_TOKEN_TO_BE_REPLACED