Andrew: Aaron, thank you for your…
Matthew: Thank you Aaron.  Your post…
Aaron Milavec: Let’s assume, for a moment,…
Aaron Milavec: When you ask, “Is this the…
Andrew: Good reading list, by the…
END_OF_DOCUMENT_TOKEN_TO_BE_REPLACED

Multifaith Matters podcast: my conversation with missiologist Michael Cooper about the narrative-historical method (0 comments)
What is the essence of Christianity? (6 comments)
How does the New Testament predict the future? (0 comments)
Who will be taken? Who will be left behind? Darn it, we’re all too late anyway! (2 comments)
END_OF_DOCUMENT_TOKEN_TO_BE_REPLACED

I am preparing some talks on Acts for a church-planting conference in a couple of weeks. What I want to say, roughly, is 1) that the apostles went about their mission with a powerful historical—or apocalyptic—narrative in mind; 2) that the churches they planted were not just churches, they were communities of God’s new future for Europe, they were the means by which the righteousness of Israel’s God would be demonstrated to the pagan world; and 3) that church-planting in Europe today needs to be undertaken with a similar “narrative-historical” mindset. Hopefully it won’t sound quite as dry and theoretical as that.

The apostles did not set out to save lost souls or to convert Europe to Christianity. They set out to proclaim to the peoples of the Greek-Roman world that the God of Israel had raised his Son from the dead and made him the coming judge and ruler of the nations.

The apostles were not evangelists or missionaries in the popular sense. Their message or gospel was much more like that of Moses’ announcement to Pharaoh or Jonah’s to the people of Nineveh. Moses told Pharaoh that YHWH was about to act to deliver his people—a public and political event. Jonah told the Ninevites that in forty days YHWH would overthrow the city—a public and political event. For the apostles the resurrection of Jesus was confirmation that in the not too distant future YHWH would overthrow the whole idolatrous pagan system—a public and political event. God is no longer willing to overlook the centuries of ignorance; he commands all people to repent of the worship of idols (Acts 17:30). The task of the apostles was to make this known across the empire, from Judea to Spain. 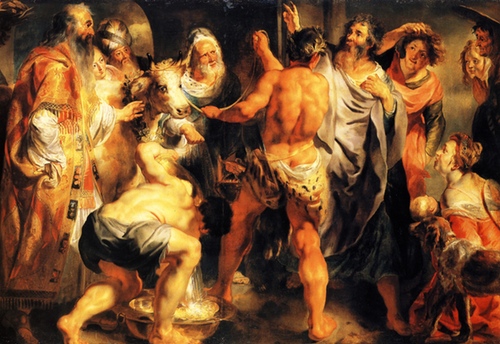 There are two parts to the argument. First, God was about to judge his own people, Israel—the coming destruction of Jerusalem and the temple—but had provided through Jesus the possibility of forgiveness and renewal, a narrow road leading to life. As I argued in the previous post, this is where the atonement is operative. Jesus died for the sins of Israel, for the sake of the future of the people of God.

Then, secondly, and on the basis of this, the God of Israel would soon defeat his enemies and annex the nations for himself. This is where I differ from C. Kavin Rowe’s otherwise excellent analysis of Luke’s “political vision” in Acts. Rowe states:

The Christians are not out to establish Christendom, as it were…. New culture, yes—coup, no.1

I disagree. I think that the expectation of kingdom must have meant, in historical terms, Christendom, or something very much like it. It comes down to who rules the nations: “She gave birth to a male child, one who is to rule all the nations with a rod of iron, but her child was caught up to God and to his throne…” (Rev. 12:5). Otherwise, I don’t see how we can call it a “political vision”.

[pullquote]How would this historical transformation—this “coup”—come about? Through the faithful Christlike witness of, in effect, a renewed network of synagogues.[/pullquote] In Paul’s view, the synagogues scattered across the Mediterranean world—outposts of Jerusalem, as Philo understood them—should have been a light to the nations, the concrete social means by which YHWH would be justified, shown to be in the right, in the eyes of the pagan world. They were not. The Jews consistently fell short of the glory of God. So they would be replaced by new “synagogues”, local communities, consisting of both Jews and Gentiles, which had been redeemed from the curse of the Law and empowered by the Spirit of the living God to live righteously. Part of Paul’s task was to ensure that the self-offering of the Gentiles was fit for this purpose (Rom. 12:1; 15:16).

So the apostles’ message to the Greek-Roman oikoumenē, the empire, was not aimed at individuals: believe in Jesus and you will have everlasting life. It was aimed at nations, at a centuries-old civilization: the God of Israel was about to turn this world upside down (cf. Acts 17:6), to “judge” it—just as before he had “judged” Egypt, Assyria, and Babylon—by a man whom he had appointed, “and of this he has given assurance to all by raising him from the dead” (Acts 17:31). Individuals then had to decide how they would respond to that message.

Because the future of the people of God, particularly in Europe, is again uncertain, a matter of faith, the church here finds itself facing much the same challenge. The apostles worked with the Old Testament conviction that YHWH would eventually rule the nations. That historical “victory” has come and gone. I don’t believe we can now formulate the future in such terms. But I do argue that it is again the task of churches and church-planting organizations in Europe to shape communities that embody in their life and teaching a different future. This is what we need apostles for—to envision a plausible new future.

As in Acts it is necessarily a two-part process. It begins with the renewal of the churches, and I would suggest that church-planting and the current re-imagination of Christian community are a crucial elements of that renewal. It may also be appropriate that we firmly remind ourselves, in this context, that we are an atoned-for people. Then, secondly, these renewed, refreshed, re-imagined expressions of church should be shaped as corporate signs of a world to be transformed, communities of grace and obedience that transcend the injustices and follies of western culture. We need to learn from God what that looks like.

Very good thoughts, as I’ve known this is your passion for European church-planting for quite some time now. I’m longing to see this kind of vision come forth more and more in the US now that I’m back here. We’ll get there, I think, as the cultural ”Christendom” of the US fades more and more. Then we will hopefully better see a need to re-establish something fresh — connected to the historic church, but freshly encountering what it means to plant churches in light of the narrative of Scripture and the empowering of the Spirit.

What is the essence of Christianity?
How does the New Testament predict the future?
Who will be taken? Who will be left behind? Darn it, we’re all too late anyway!
Resurrection in the Old Testament: literal or metaphorical?
END_OF_DOCUMENT_TOKEN_TO_BE_REPLACED