Andrew: Thanks, for this, Richard…
Samuel Conner: Just starting into your new…
Richard Blakesley: Hi Andrew, I am thinking…
Andrew: I take the seventh trumpet…
davo: Hi Andrew. Subduing a…
END_OF_DOCUMENT_TOKEN_TO_BE_REPLACED

“Hell” and the individual sinner

Rob got in touch with a couple of questions about my post on the unbiblical doctrine of hell. My argument is roughly that the language of painful judgment in the New Testament—Gehenna, wailing and gnashing of teeth, violent destruction, etc.—refers not to what happens to individuals after death but to what happens to Israel or to the political-religious enemies of Israel in the course of history. For example, bodies being thrown into Gehenna—into the valley of the sons of Hinnom—is something that typically happens when Jerusalem is being besieged by an enemy (Jer. 7:30-33; 19:6-8). It is a prophetic symbol of God’s punishment of his people. What Rob asks is this:

I’m attracted to much of the argument but just wonder how you deal with texts where the individual seems in the crosshairs. Eg., Jesus urging people to lose eyes or hands etc. as better than entering  into hell. Any thoughts? Is it just saying better than being annihilated?

What also of texts where the devil seems to be headed for torment? If that’s for him, and sinners go to the same place, why would they not also have a similar fate?

Jerusalem and its unburied dead

This is how Deuteronomy’s covenant theology works. On the one hand, for example, Moses pronounces curses upon the individual who worships idols or misleads a blind man on the road—and “all the people shall answer and say, ‘Amen’” (Deut. 27:15, 18). On the other, if Israel is not “careful to do all his commandments and his statutes that I command you today”, then a series of disasters will befall the nation, culminating in military invasion, the besieging of the cities of Israel, massive loss of life, and exile (Deut. 28:15-68).

In particular, Moses warns that:

…your dead bodies shall be food for all birds of the air and the beasts of the earth, and there shall be no one to frighten them away. (Deut. 28:26)

We have the same dreadful image Isaiah 66:24 and Jeremiah 7:30-33; 19:6-8. One of the consequences of judgment on Israel will be that the corpses of individual Jews will be left unburied, slain by their enemies, a “horror to all the kingdoms of the earth” (Deut. 28:25). Jesus is only saying what the prophets had said before him and what Josephus would describe after him:

Now the seditious at first gave orders that the dead should be buried out of the public treasury, as not enduring the stench of their dead bodies. But afterwards, when they could not do that, they had them cast down from the walls into the valleys beneath. (War 5.12.3). 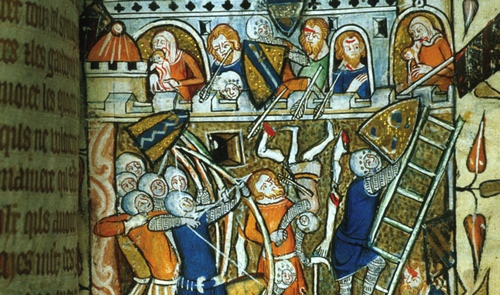 Jesus says to the scribes and Pharisees, whom he has condemned for their particular acts of hypocrisy, “how are you to escape being sentenced to geenna?” (Matt. 23:33). He then says to them, “all these things will come upon this generation”, and laments over the imminent fate of Jerusalem (Matt. 23:36-38). Hagner’s argument at this point that the Jewish religious leadership “were to experience a foreshadowing of eschatological judgment in the destruction of Jerusalem and their temple” is entirely gratuitous.1 Jesus says no more than that this generation of Jews would suffer the sort of national calamity that Moses and the prophets had described.

In John’s vision in Revelation, just before the final judgment of all the dead, Satan is “thrown into the lake of fire and sulphur where the beast and the false prophet were, and they will be tormented day and night forever and ever” (Rev. 20:10).

There is no reference to the “torment” of the wicked here, but we also need to take into account this earlier passage:

And another angel, a third, followed them, saying with a loud voice, “If anyone worships the beast and its image and receives a mark on his forehead or on his hand, he also will drink the wine of God’s wrath, poured full strength into the cup of his anger, and he will be tormented with fire and sulphur in the presence of the holy angels and in the presence of the Lamb. And the smoke of their torment goes up forever and ever, and they have no rest, day or night, these worshipers of the beast and its image, and whoever receives the mark of its name.” (Rev. 14:9-11)

This passage forms part of a proclamation of judgment against Rome. The nations are called to fear God and give him glory because the hour of his judgment has come—clearly not the same judgment of the dead described in chapter 20 (14:6-7). The fall of Babylon the great is proclaimed (14:8). Those who have worshipped the beast and its image will be included in this judgment (14:9-11).

In the later description of the fall of Babylon the great more is said about the “torment” of Rome:

As she glorified herself and lived in luxury, so give her a like measure of torment and mourning…. (18:7)

And the kings of the earth, who committed sexual immorality and lived in luxury with her, will weep and wail over her when they see the smoke of her burning. They will stand far off, in fear of her torment, and say, “Alas! Alas! You great city, you mighty city, Babylon! For in a single hour your judgment has come.” (18:9–10)

And all shipmasters and seafaring men, sailors and all whose trade is on the sea, stood far off and cried out as they saw the smoke of her burning, “What city was like the great city?” (18:17–18)

Once more they cried out, “Hallelujah! The smoke from her goes up forever and ever.” (19:3)

This image of the “burning” of Rome functions in much the same way as the image of Jerusalem’s dead being thrown over the walls to lie unburied, carrion for wild animals. The language is apocalyptic rather than prophetic, but the point is the same. Unrighteous Jews will suffer when God judges Israel. Unrighteous pagans will suffer when God judges Rome—they will share in its ruin.

[pullquote]This is not an argument for “annihilation”—it is nothing so metaphysical.[/pullquote] The point is simply that individuals suffer as a consequence of tumultuous and destructive historical events.

The corpses of those Jews who rebelled against YHWH will unendingly be consumed by worms and fire, and will be “an abhorrence to all flesh” (Is. 66:24; cf. Mk. 9:47-48). The pagans who worshipped the beast and its image will unendingly share in the torment of the idolatrous empire, as the kings of the earth, and merchants, and seamen, look on in horror. In other words, God’s judgment is the last word on these particular situations.

But when we come to the final judgment of all the dead in Revelation 20:11-15, nothing is said of torment. The final purpose of the lake of fire, which is interpreted as death not suffering, is to destroy whatever has no place in God’s new creation, including death itself.

On your last paragraph, Revelation 19.20 and 20.10 says the lake of fire burns with sulfur. It seems picky to say the lake of fire mentioned in 20.11-15 is substantially different from the one mentioned just a verse before, solely because John doesn’t mention ‘sulfur’ in the latter verses.

I think that is a great point Mark. Where I’m at on this right now is that the lake of fire is the same in Rev 20 as it is in Rev 14, 19, and is the same as Gehenna in Matthew and the prophets. That is, that the “final” judgment in Rev 20 is not at the end of time, but at the second coming “in that generation” at the end of the old covenant age/world in AD70. Per Daniel 12, that’s when the dead were raised.

Thanks, Mark. Youre right. I overlooked Revelation 21:8. I’ve deleted the paragraph. But I do not agree with Jerel’s Preterist argument that Jesus’ Gehenna and John’s lake of fire refer to the same event. It seems pretty clear to me that Rome is in view in chapters 13-19; and as I’ve said many times before, I think that John is trying to describe a comprehensive defeat of death and evil in chapters 20-21 that is not found in the Old Testament and only rarely hinted at in the New Testament.

I agree that Rome is in view in Rev 13-19. It seems rather clear to me that the Harlot city, Babylon, is Jerusalem who is riding on top of the beast Rome. Jerusalem is the one filled with all the blood of the prophets since the earth began (Rev. 18:24; Matt. 23:35). The beast turns on Jerusalem and destroys her. Then the beast (corporate symbol of Rome) and the false prophet (corrupt leaders in Israel) are then burned (the shattering of the covenantal authority of all the beasts that were over old covenant Israel per Daniel 2 — they all fall at once when the rock destroys the entire metal man image, an image of covenant jurisdiction over Israel — see Matt. 21:40-45 for collorary).

Andrew I don’t know who you can say that the things in Rev 21-22 are not in the OT. Isaiah 65, 66, Psalms 116:8, Isa. 62, Isa. 60:11, Ezekiel 47, Zech. 14, Isa 24-27, etc. Those are just a few of the OT background texts of Rev. 21-22. Another thing, is that Rev. 21-22 doesn’t depict the eradication of all evil and sin in a literal physical sense, but the spiritual covenantal eradication (the presense of everlasting righteousness) within the new covenant city Jerusalem to which they had already come (Heb. 12, Gal. 4). This is the same picture Ezek. 47 presents with the gradual increase of the flow of the river out of the newly constructed Temple, and the river goes everywhere and brings fresh water and life where it goes, but there are swampy salty marsh areas that do not regenerate. The picture is the same in Rev. 21-22, because there still are unregenerate outside the city who are invited to come in and wash their robes. The gates of the city are open continually and the invitation to enter is given. That doesn’t fit your situation as the final defeat of all sin and evil. Sin and evil do exist after the judgment of Rev 20 and the arrival of the new heavens and earth (see. Rev. 21:22-27; 22:14-15).

My point was that we don’t find the “comprehensive defeat” of death and evil in the Old Testament that we see (I think) in Revelation 21-22. Yes, the language has prior currency for the judgment and restoration of Israel, but it still seems to me that John is pushing it a significant step further. It seems to me that he is trying to portray a new ontology.

Why did Jesus instruct his disciples not to preach the kingdom of God to Gentiles and Samaritans?
Why does Jesus give the kingdom back in the end and become subject again to God?
Does Paul say that Jesus is God in Romans 9:5?
Why did the Jews accuse Jesus of making himself equal to God?
The throne of Jesus and the throne of God

Notes on J. Richard Middleton’s The Liberating Image: The Imago Dei in Genesis 1
Our eco-theological blindspots and the climate crisis
Biblical hermeneutics and the destabilising of the world
“Image of God” as eco-theological premise?
A mistake to let them subdue the earth and have dominion over it?
New book coming soon: In the Form of a God: The Pre-existence of the Exalted Christ in Paul
Where is the promise of his coming?
Ten things the church can learn about missions from a narrative-historical perspective
END_OF_DOCUMENT_TOKEN_TO_BE_REPLACED