Juanita: Hi there Sam We spoke…
Andrew: David, many thanks for this…
David: And, for further reading, I…
David: There’s a substance to this…
Arthur Davis: That, I think, is the…
END_OF_DOCUMENT_TOKEN_TO_BE_REPLACED

Conversation with Mike Bird about In the Form of a God (0 comments)
Answering Mike Bird about the referent of "all things" in 1 Corinthians 8:6 (0 comments)
Interview: The Preexistence of Christ and Narrative Historical Theology (1 comment)
How we got from kingdom to Trinity: Constantine and pagan monotheism (2 comments)
END_OF_DOCUMENT_TOKEN_TO_BE_REPLACED

The Son of Man according to Daniel, Enoch and Jesus: it’s the same old story

Scholars disagree over who exactly the son of man figure is in Daniel’s vision. Is he a supernatural being—a great angel like Michael? A human individual, perhaps a messiah? Or is he a symbolic person representing the suffering saints of the Most High? I lean strongly towards the latter interpretation because it fits the story that is being told. But I would also argue that the story being told, whether here in Daniel, or in 1 Enoch, or in the Synoptic Gospels, is much more important than we generally suppose.

The four destructive beasts which emerge from the sea are, according to the interpreting angel, four kingdoms (Dan. 7:15 LXX). The little horn which appears on the head of the fourth beast is a particularly nasty king. He will “speak words against the Most High”; he will make war against the “holy ones of the Most High” and rout them; he will seek to suppress the Law (7:21, 25 LXX). But the “ancient of days” will sit in judgment. The beast will be destroyed, and the verdict will be given for the “holy people (laōi hagiōi) of the Most High”; and “the holy ones gained possession of the seat of empire (basileion)” (7:22, 27 NETS).

So the Son of Man represents—whether or not he also has an individual identity—the persecuted righteous in Israel who will receive from God the authority to rule over the nations that were formerly oppressed by the fourth beast from the sea.

The vision pertains to a real historical scenario. The little horn is the Greek-Seleucid king Antiochus Epiphanes IV (c. 215-164 BC), who sought to impose Hellenistic religion and culture on the Jews. His aggression led to the Maccabean revolt, but that is not part of Daniel’s story here. The argument is only that when Israel comes under such intense pressure from a pagan king to forsake the covenant, YHWH will step in to defeat the aggressor, terminate his reign, vindicate the righteous, and give them authority to rule the nations.

During the second and first centuries before Jesus the author or authors of the Book of Parables in the composite apocalyptic text known as 1 Enoch made elaborate use of Daniel’s story about “one like a son of man”.

First the context. Mighty kings and powerful rulers “possess the land” of Israel. They deny the Lord of Spirits and his anointed one. They do not recognise that their authority to rule was given to them by God. Instead, they trust in “the gods they have made with their hands”. They act unjustly; they persecute and kill righteous Jews (1 En. 46:5-8). The prayers of the righteous rise to heaven; and the “holy ones” in heaven are “interceding and praying in behalf of the blood of the righteous that had been shed” (47:2). 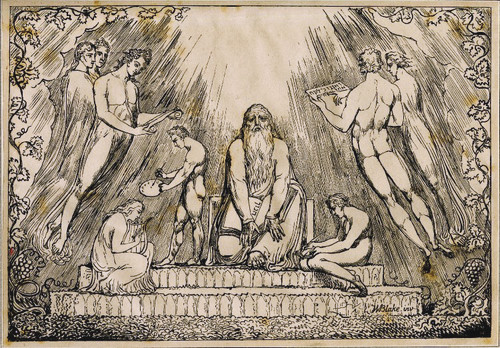 It is under these dire political-religious circumstances that the Son of Man—a.k.a. the Righteous One or Chosen One—will be revealed. He will appear in the presence of the righteous; he will be revealed to those who have “hated and despised this age of unrighteousness”; “in his name they are saved, and he is the vindicator of their lives” (38:2-3; 62:7-8; 69:27). The prayers of the righteous will be heard; they will not have to endure persecution for ever; judgment will be executed on their behalf. He is the solution to their problem.

On a day of reckoning, a day of “affliction and tribulation”, judgment will be given to the Son of Man; the spirit of righteousness will be poured upon him. He “will sit on the throne of glory” and assess the works of the “sinners who have denied the name of the Lord of Spirits”. He will overthrow the kings which possess the land of Israel and will remove them from their kingdoms; and “the word of his mouth will slay all the sinners, and all the unrighteous will perish from his presence” (45:2-3; 46:5; 53:5; 62:1-2; 69:26-29).

The kings and the powerful people who possess the land will see “that Son of Man sitting on the throne of his glory”, and they “will bless and glorify and exalt him who rules over all, who was hidden”. They will fall on their faces before him and will seek mercy from him. But they will be sent from his presence by the Lord of Spirits and will be punished “for the iniquity that they did to his children and his chosen ones”. Too late, they will learn that they were mistaken in trusting in the sceptre of their kingdom and that their “ill-gotten wealth” will not save them from “the flame of the torment of Sheol” (62:3-6, 9-11; 63:1-12; 67:8).

Following this judgment of the Gentile forces that possess the land, the righteous “will rest from the oppression of the sinners”; they will have everlasting life; “the Lord of Spirits will abide over them, and with that Son of Man they will eat, and they will lie down and rise up forever and ever” (53:7; 58:3-4; 62:13-16). The righteous dead will be raised: “Sheol will give back what has been entrusted to it” (51:1-2). God will transform heaven and earth, making them a blessing (45:4-5). Wealth and weapons will be “destroyed from the face of the earth” (52:6-9). The rebellious angels, who had become “servants of Satan… leading astray those who dwell on the earth”, are thrown into a burning furnace (54:5-6).

So again, a specific historical circumstance is in view. The story of the Son of Man, whoever he is, is the story of how YHWH intervenes at a time of crisis to “judge”—that is, to put right a bad situation. Through the agency of the “Son of Man” YHWH defeats the pagan oppressor—in this case Rome; he delivers and vindicates the persecuted faithful in Israel, and establishes his own righteous rule over the nations in a new heaven and new earth.

Jesus’ allusions to Daniel’s narrative are spare, but he is telling the same basic story, within the same political-religious parameters. The Son of Man will suffer at the hands of apostate Israel and the rulers who possess the land. But he will be vindicated. He will receive the kingdom, and he will come within a generation to deliver and likewise vindicate those who will suffer for his sake. Jesus certainly identifies himself with the Son of Man figure who is given authority by God to judge and rule over the nations, but he incorporates his followers, who will have to take up their own crosses, into his story. So in the end, John can say that the martyrs who lose their lives in the conflict with Rome will be raised and will reign with Christ for a thousand years” (Rev. 20:4).

Like Daniel and Enoch before him, Jesus tells a story about a Son of Man figure who is revealed to Israel at a time of severe historical crisis. The “Son of Man” event is how YHWH solves the problem of pagan imperial oppression at the turn of the ages.

Generally, we have been so preoccupied with the person of the Son of Man that we have missed the point of the story that goes on around him. It’s not an end-of-the-world story. It’s an end-of-foreign-domination story, an end-of-persecution story, a rise-and-fall-of-nations story, a beginning-of-divine-ascendancy story, and it should be read as such.

This is how NOT to dialogue. Steve Hays’ hateful rhetoric shows an integral blight of character:

Thanks for this Post. It answers some questions I had about this reference. It seems like you see the main focus of Jesus reference to Daniel 7 as pointing to the political situation that is about to unfold. Do you see any suggestion as to Jesus identity beyond a description of his authority? It seems to me from the text that the Son of Man and Ancient of Days are not one being or equal. Would you agree?

No, I don’t think many people would argue for a divine identity christology on the strength of the Son of Man language. The Son of Man in Daniel 7 is at most an angelic figure, but more likely in my view a symbol for the persecuted righteous in Israel. The saints of the Most High are given rule over the nations, but there is no indication in Daniel even that the Son of Man is included in the “court” that will sit on the thrones of judgment to judge the beast (Dan. 7:9, 26).

Bauckham states that “Jesus’ claim to be seated beside God on the cosmic throne from which God rules all things can only be, from a Jewish theological perspective, a claim to share in the unique divine identity of the God who alone rules over all things” (Jesus and the God of Israel, 265). But this appears to have Psalm 110:1 in view rather than Daniel 7:13-14, and even then it’s not clear to me why Psalm 110:1 should be interpreted as implying identity between YHWH and the ՙadon who is made to sit at YHWH’s right hand.

Conversation with Mike Bird about In the Form of a God
Answering Mike Bird about the referent of "all things" in 1 Corinthians 8:6
Interview: The Preexistence of Christ and Narrative Historical Theology
How we got from kingdom to Trinity: Constantine and pagan monotheism
Jesus and Paul, works and faith
Some hazardous thoughts on the Trinity for a new year and a new era
Was it Roman custom for people to return to their home town for a census?
A Hindu asks a very good question about the death of Jesus and the salvation of Gentiles
END_OF_DOCUMENT_TOKEN_TO_BE_REPLACED