Christian soteriology works on the assumption that Jesus’ death was a unique saving event. The only real antecedent considered is the suffering of Isaiah’s servant, upon whom the Lord has laid “the iniquity of us all”, understood not as referring to a historical figure or community in Isaiah’s world but as a prophecy about Jesus. But the easy presumption of uniqueness is maintained only by suppressing the historical context. Broadly, Jesus’ death can be located in a tradition of righteous suffering under pagan oppression. In particular, Jews at the time—presumably including Jesus himself—would have been familiar with the stories of the Maccabean martyrs.

In 2 Maccabees, which is generally dated to the late second century BC, we are given the story of the gruesome torture and killing of the old man Eleazar, seven brothers, and their mother by the tyrant Antiochus, for refusing to perform an “unlawful sacrifice” and eat the meat of a pig. This is happening because Israel has been unfaithful to the covenant and is being punished by God—sooner rather than later, “in order that he may not take vengeance on us afterward, when our sins have reached their height” (2 Macc. 6:15). 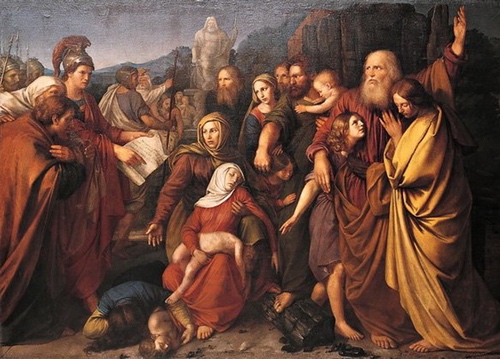 There is more to these deaths than heroic faithfulness. The seventh brother informs the king that he gives up his life for the sake of the Law, “appealing to God to show mercy soon to our nation and… through me and my brothers to bring to an end the wrath of the Almighty that has justly fallen on our whole nation” (2 Macc. 7:37–38). The martyrs also expect to be raised up “to an everlasting renewal of life” (7:9, 14, 36). The concrete evidence for the saving efficacy of their deaths is presented in the fact that Judas Maccabeus then “became insuperable for the nations, for the wrath of the Lord had turned to mercy” (2 Macc. 8:5).

4 Maccabees, which perhaps dates from around AD 100, has a more developed soteriology (and its author a much more vivid imagination). Eleazar prays: “Be merciful to your people, and be satisfied with our punishment on their behalf. Make my blood their purification, and take my life in exchange for theirs” (4 Macc. 6:28–29). Later the author comments that “through the blood of those pious people and the propitiatory (hilastēriou) of their death” the enemy was defeated, the homeland was purified, and Israel was preserved (4 Macc. 17:20-22).

The dating is an issue here, but it shows at least that during this period the suffering of righteous Jews could be interpreted in much the same language that Paul applies to Jesus in Romans 3:25: “…whom God put forward as a propitiation (hilastērion) by his blood, to be received by faith.”

How do we explain the emergence of the idea of a human sacrifice, which is hardly sanctioned by Torah? It appears that when the normal sacrificial system is malfunctioning or unavailable for whatever reason (in this case, because it has been abolished by Antiochus: cf. Dan. 11:31), “the voluntary self-sacrifice of a righteous person is seen to function as would a sin offering”.1 Another example: in the expanded Greek version of the story of the three young men thrown into Nebuchadnezzar’s furnace, Azarias prays that their sacrifice may be accepted in place of the burnt offerings that can no longer be performed in the temple:

And in this time there is no ruler and prophet and leader, no whole burnt offering or sacrifice or oblation or incense, no place to make an offering before you and to find mercy. But rather with a broken life and a humbled spirit may we be accepted, as though it were with whole burnt offering of rams and bulls and with tens of thousands of fat lambs; thus let our sacrifice come before you today…. (Dan. 3:38–40 LXX)

So through the sacrificial and atoning deaths of these righteous martyrs Israel is saved from the wrath of God, which has come upon it on account of the sins of the people and of the Hellenizing priestly aristocracy in particular. In other words, the martyrs are a precise historical precedent for Jesus’ atoning death for the sins of his people in light of the present corruption of the temple cult and in anticipation of its destruction. David deSilva makes this argument in his chapter on “Jewish Martyrology and the Death of Jesus”, in G.S. Oedema and J.H. Charlesworth, The Pseudepigrapha and Christian Origins (2008).

Does this mean, then, that Jesus was just another Jewish martyr? Are there any significant respects in which his story was different from theirs?

The martyrs were righteous insofar as they remained faithful to the Law at the end—there is no suggestion that they were sinless otherwise. But the doctrine of Jesus’ sinlessness may overstate the biblical argument. When the author of Hebrews says that he was in every respect “tested as we are, yet without sin”, it is specifically persecution that is in view (Heb. 4:15; cf. 1 Pet. 2:22): Jesus was under intense pressure to abandon the dangerous course that had been set before. This does not rule out the more general affirmation (cf. 1 Jn. 3:5), but it remains the case that the narrative highlights the concrete act of obedience under duress.

Does this mean, then, that Jesus was just another Jewish martyr? Are there any significant respects in which his story was different from theirs? Yes, there are.

1. If the suffering of the martyrs is understood to forestall a much more serious punishment “when our sins have reached their height” (2 Macc. 6:15), then their deaths constitute a provisional or penultimate atonement, bringing only temporary respite. Jesus’ death may be seen as a final atonement for the sins of Israel before the final catastrophe of the war against Rome, when Israel’s persistent sins will have indeed reached their height. The martyrs die and the temple is restored. Jesus dies, and there will be no more temple.

2. The martyrs die for the sake of their ancestral laws. Jesus dies because he is seen as a pretender to the throne of Israel—Caiaphas will see the Son of Man seated as Israel’s king at the right hand of God, coming with the clouds of heaven (Mk. 14:62). It is not the Law that is at issue but kingdom.

3. The martyrs die believing that God will raise them to everlasting life, but the writings do not follow up on that expectation. There is no account of their resurrection—presumably they have to wait (cf. 2 Macc. 12:44). In the story about Jesus it is of central importance that God immediately vindicates his Son by raising him from the dead and visibly elevating him to his right hand in heaven.

4. Once seated at the right hand of God, Jesus pours out the Spirit on his followers (Acts 2:33). In the first place, this is the Spirit of prophecy by which the community will be empowered in these last days. But it is also the Spirit of a new covenant, which will quickly make the Law redundant.

5. As Gentiles receive the same Spirit and become part of this kingdom movement, it becomes apparent that Jesus’ death not only saved God’s people from annihilation; it removed the dividing wall of the Law which barred Gentiles from participation in God’s people. The deaths of the martyrs preserved Israel from the nations. The death of Jesus paved the way for YHWH’s annexation of the nations.

See also:
Martyrdom and salvation
Election and the martyr church

I am reading Jurgen Moltmann’s Crucified God presently. He views the crucifixion as Central and unique to our understanding of who God is; “Theology of the Cross”. This uniqueness has to do with the Trinitarian relationship, God himself present on the cross,… a very high Christology obviously.

Does this move well away from your narrative historical reading or is there perhaps a way to hold his views and yours together?

Curious of your position on Moltmann.

Billy, that’s a difficult question. It needs more serious consideration, but off the top of my head:

Andrew - your list of the significant differences between the death of Maccabean martyrs and the death of Jesus restores his death to uniqueness of a kind.

The most outstanding uniqueness is referred to almost in passing in 4b and 5, without any word of explanation as to how or on what grounds his death enables Gentiles to receive the Spirit, which perplexingly changes from a Spirit of prophecy to a Spirit of the new covenant (without any explanation of the connection). Likewise no explanation of how the dividing wall of the Law was removed between Jews and Gentiles by Jesus’s death.

I was drawn to a post you provided some time ago on the death of Jesus on the cross, with the intriguingly attractive line that as Good Friday approaches, theories of the atonement are a waste of space. My comment then might serve as an answer to the questions which I think are raised by your comments in 4b and 5:

Just in passing, and somewhat off-message, since it’s good to keep in touch, even on a theological web forum: I’m approaching the final stages of my unexpectedly enforced sabbatical. My researches during this time have made me more convinced than ever of the error of reading the key biblical texts into the subject of same-sex relationships today, not least through listening over the last few weeks to the stories of couples in same sex relationships. Theology has to dialogue with experience. I’ve been discovering that all major traditions affirm this, but that too, the Christian faith itself was a massive triumph of experience over the perceived orthodoxy of biblical interpretation at that time.

At some point, it would be good to discuss your own readings of the NT generally in relation to this striking feature of New Testament epistemology.

The most outstanding uniqueness is referred to almost in passing in 4b and 5, without any word of explanation as to how or on what grounds his death enables Gentiles to receive the Spirit…

It was only a summary statement, but that said, “removed the dividing wall of the Law which barred Gentiles from participation in God’s people” more or less says what Paul says in Ephesians 2:14-16. Can you explain how his death removed the dividing wall of the Law? I guess my understanding would be that YHWH provided in Christ an alternative ground for the future of his people, which simply did not require observance of the Law (cf. Rom. 3:21-25).

…which perplexingly changes from a Spirit of prophecy to a Spirit of the new covenant (without any explanation of the connection).

Not sure I see what’s so perplexing about it. In Acts 2 Peter highlights the prophetic aspect of the giving of the Spirit to the disciples—they see what Jesus saw and proclaim what they have seen. But in other arguments—for example, in Romans—it is the Spirit of the new covenant, superseding in some sense the old covenant governed by Torah.