Cleanthes’ “Hymn to Zeus” and the renewal of monotheism (4 comments)
Conversation with Mike Bird about In the Form of a God (0 comments)
Answering Mike Bird about the referent of "all things" in 1 Corinthians 8:6 (0 comments)
Interview: The Preexistence of Christ and Narrative Historical Theology (1 comment)
END_OF_DOCUMENT_TOKEN_TO_BE_REPLACED

I recently chanced upon this quotation from a book by Vernon White, Atonement and Incarnation, published in 1991:

The universal claims of the Christian faith are not easy to sustain. It is sufficient merely to spend some time sitting at a roadside café in a busy, cosmopolitan city, watching the world go by. It is a big world, with too many people. It stretches the imagination a long way to think how God could have significant personal interest in every individual.… How are we to imagine our little local Christ event reconciling all that?

I don’t know where White takes this line of thought. Is the failure of the imagination a reason not to believe in a universal atonement? Is he encouraging his readers to explore new ways of making the universal claims in a busy cosmopolitan context? Does he have a better way of believing in “our little local Christ event”?

But I have some sympathy with the sentiment expressed. It seems to me that it is getting very difficult to sustain the traditional view of the atonement as a grand Universal Metaphysical Event (UME), however exactly we explain it. We just don’t buy these ballooning, over-ambitious theories of everything any more.

Now it could be said in response that the difficulty of believing is not itself an argument against belief. Fair enough. But I suggest that, to a large extent, this is a problem that theological tradition has created for itself, and that the shifts in intellectual culture that have made belief in the atonement as a UME such hard work are at the same time permitting us to develop a more compelling historical account of the “saving” significance of Jesus’ death.

1. I take it that as the early church migrated into the Greek world in the first two or three centuries, the biblical material was reinterpreted in accordance with a very different set of intellectual presuppositions, in order to answer a very different set of questions. In particular, the historical narrative about the concrete political-religious existence of Israel in relation to the nations was reconceptualized as a theological-philosophical account of the general redemption of humanity, heavily dependent on John’s Gospel: the Word became flesh and took away the sins of the world.

Much of what is being done in New Testament studies at the moment is simply running that process in reverse—recovering the Jewish narrative that gave birth to, and was then swallowed up by, the theology of western Christendom.

2. The success of European Christendom and the emergence of a modern rationalism from within the Christian cultural context reinforced the presumption that the atonement must be ascribed universal, imperialising significance. Prevailing narratives of the cosmos and human existence do not include the Christ Event.

3. Modern evangelicalism has managed to keep the grand UME idea going long after the collapse of European Christendom but only as part of a private narrative of personal salvation. It has no public value.

We would gain a better understanding of the New Testament argument if we let some of the theological air out of the concept and allowed it to resume its natural historical proportions.

Now here’s the challenge, as I see it.

On the one hand, because the over-inflated balloon of atonement theology is profoundly at odds with the prevailing secular worldview, there’s a good chance that it will burst, sooner or later—the difference in air pressure is too great, or something like that—and we’ll be left with nothing, just scraps of shredded language. 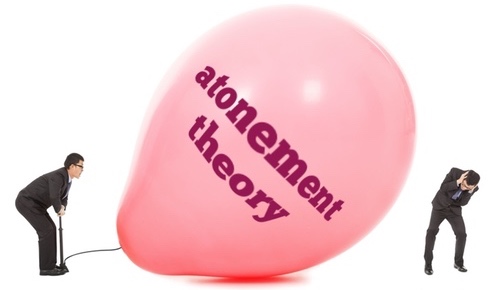 The theology was developed under a very different intellectual consensus, which is why, when you look out of the coffee shop window at the ordinary world passing by, the whole theory can seem so… well, implausible, anachronistic, irrelevant.

On the other hand, I think that we would gain a better understanding of the New Testament argument if we let some of the theological air out of the concept and allowed it to recover its natural historical proportions.

Even in one of the most dense and elevated statements of belief that we have in the New Testament we find that the death of Jesus is assigned a rather restrained place in the narrative.

Paul writes to the Ephesians that those who “were the first to hope in Christ”—Jewish believers like himself—have been redeemed by the blood of Jesus and forgiven, have obtained an inheritance as sons, and live now “to the praise of his glory” (Eph. 1:3-12). They live as a sign of things that will come.

His Gentile readers have also heard and believed the good news about the resurrection of Jesus. They too have received the Spirit as a concrete guarantee that in due course they will inherit the future rule of Christ along with the Jewish believers (Eph. 1:13-14; cf. Eph. 5:5).

The object of their belief is Jesus, who was raised from the dead and has been seated at the right hand of God, “far above all rule and authority and power and dominion, and above every name that is named, not only in this age but also in the one to come” (Eph. 1:21).

The argument has been carefully constructed, and we shouldn’t just pulp it and dollop it out as fine-sounding doctrinal porridge to feed undiscerning believers.

1. Some Jews, such as Paul, have been redeemed from the trespasses of Israel by the death of Jesus. They believe that God has given all authority to his Son, and expect to inherit a new future, when Christ will rule over the nations.

2. Some Gentiles have also believed this, and have received the Spirit as tangible evidence that they will also share in this new future.

3. The resurrection and exaltation of Jesus to the right hand of God may be said to have cosmic significance, but in the context of the New Testament the main argument is theo-political. The allusion to Psalm 110 in the account of Jesus’ exaltation suggests that what is foreseen is the rule of Christ, for the sake of his people, amongst the nations.

There is an important argument about atonement here, but it is confined to the narrative about Israel. Jesus died for the sins of Israel to ensure that the people of God had a future. What drives the mission of the apostles is not belief in the death of Jesus but belief in the resurrection and its implications for the future of the people of God vis-à-vis the nations. The resurrection is certainly an extraordinary act of new creation, the beginning of a new humanity in the midst of the world, but its meaning is still to be found principally in the unfolding of the historical narrative, not in the realm of Platonic absolutes.

Cleanthes’ “Hymn to Zeus” and the renewal of monotheism
Conversation with Mike Bird about In the Form of a God
Answering Mike Bird about the referent of "all things" in 1 Corinthians 8:6
Interview: The Preexistence of Christ and Narrative Historical Theology
How we got from kingdom to Trinity: Constantine and pagan monotheism
Jesus and Paul, works and faith
Some hazardous thoughts on the Trinity for a new year and a new era
Was it Roman custom for people to return to their home town for a census?
END_OF_DOCUMENT_TOKEN_TO_BE_REPLACED