Theological hermeneutics and the meaning of “Immanuel”

Here’s another example of how a theological reading can drive a coach and horses through historical exegesis. At the heart of the “theological doctrine of the incarnation,” Adams writes, “is the union of the divine and human in Jesus the Messiah”. Keeping in mind Wright’s historical method and critique, however, he insists that this is not an abstraction from scripture:

the affirmation of the hypostatic union of the divine and human natures of the one hypostasis (ἐν δύο φύσεσιν ἀσυγχύτως, ἀτρέπτως, ἀδιαιρέτως, ἀχωρίστως) is a deeper penetration into the logic of what it means to call Jesus Emmanuel, “God is with us”. (142)

But the isolation of the uninterpreted identification of Jesus as Emmanuel, “God with us”, is already an abstraction from the biblical witness. No exegetical basis is given for the assumption made about the meaning of Matthew’s statement. Why does Adams think that he can be so blasé about the actual interpretation of the text? Where is the “conversation” with historical method? We never get anywhere near the logic of Matthew’s argument, never mind penetrate it more deeply. 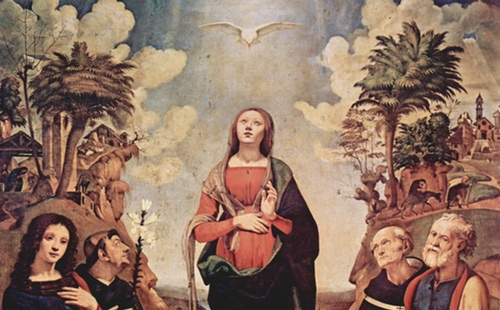 In Isaiah the child who will be born during the reign of Ahaz, whether or not to a virgin, is not an example or protoype of hypostatic union. He is a sign that at a time of extreme political crisis—Assyrian invasion—YHWH will be with his people both to judge and to deliver (Is. 7:10-8:10).

The narrative-historical assumption should be, when we turn to Matthew, that the miraculous conception of Jesus by the Holy Spirit has nothing to do with the metaphysics of incarnation—the fusion in one hypostasis of the human and the divine. It is rather a sign that at a time of eschatological crisis YHWH is again present with his people—not with humanity— to judge and to save.

Jesus is the agent of that judgment (“His winnowing fork is in his hand…”) and deliverance (“you shall call his name Jesus, for he will save his people from their sins”), which is not the case with the boy born during Ahaz’s reign. But there is nothing in Matthew’s account of the conception of Jesus that supports the theological weight imposed upon it by tradition.

See also:
Are Immanuel and Wonderful-Counselor-Mighty-God-Everlasting-Father-Prince-of-Peace the same person?
Some dull but seasonal reflections on the historical context for the fulfilment of the Immanuel prophecy
They will call his name Immanuel
The conception of Jesus, Trinity, and the search for an appropriate metaphysics: it’s nearly Christmas, after all
More on the virgin conception
The Holy Spirit 1: Conceived by the Holy Spirit
He will save his people from their sins

It seems like a deeper penetration into the logic of “God with us” would lead us away from a hypostatic union. The birth of the promised child in Isaiah’s day is the sign that God is with them, and the child’s age is a meter stick for the timeline of God’s deliverance. Before he has even reached early adulthood, God will save. In Isaiah 7, anyway, the child plays no role in this. If we connect the child mentioned in Isa 9 to Immanuel, then he also serves as ruler in God’s name. There is nowhere that any kind of God-man event takes place.

God is with us in a human by that human being a sign of God’s activity and, perhaps, the representative in which God will perform the extension of His dominion. I guess I could see how someone might say that God -incarnate- is the only way to kick this up a notch, but where would we get that idea from the Scriptures? Instead, it gets kicked up a notch because God is not just restoring Israel from her exile to an exalted status among the nations, but He is actually extending His dominion over all the nations. The souped-uppedness is in the extent of God’s activity, not a heretofore unheard of ontological curiosity.

Thank you for doing some critical spadework on Samuel Adams’ book, Andrew. As your related links show, we’ve been here before. Without reading Adams for myself, it’s difficult to get as clear a view as I’d like of what he is saying. I imagine phrases like “hypostatic union” are a red rag to a bull for you. The central issue for me would be: in what way, or how, was Jesus “Emmanuel” - “God with us” in this new context? This is where the interpretive leeway appears. Also, Matthew was not renowned for a modern historical critical interpretation of OT texts, so we cannot a priori limit his meaning to what we would like it to be, from a historical critical interpretive methodology. I simply don’t think the overall picture of Jesus as another deliverer of Israel, albeit perhaps somewhat superhuman, stands up to scrutiny. I simply don’t think you can say that a narrative historical interpretation rules out a divine/human Jesus. But it’s all a call, as it were, and I’m enjoying the posts, and the company (I think).

You’d have to look at how Matthew diverges from what we might regard a proper historical-critical reading of the Old Testament. Which direction do they point? For example, the next two stand-out quotations are:

And you, O Bethlehem, in the land of Judah, are by no means least among the rulers of Judah; for from you shall come a ruler who will shepherd my people Israel. (Matt. 2:6)

This was to fulfill what the Lord had spoken by the prophet, “Out of Egypt I called my son.” (Matt. 2:15)

The first seems to have Assyrian invasion in view; the latter, of course, refers to the exodus. They are not being applied literally, but they cast Jesus as Israel’s king or as Israel. Does Matthew anywhere suggest that he thought of Jesus in incarnational terms? Does he “misread” other texts in an incarnational, rather than corporate-royal, direction?

So the question is perhaps not “does he employ a historical critical interpretive methodology?” but “what narrative is controlling his application of prophecy?” I think we would find that it is a narrative about the judgment and deliverance of Israel.

Andrew - the second ‘prophecy’ you quote from Matthew is not even a prophecy in its OT context, and highlights the very eccentric way in which Matthew used OT prophecy to find a ‘fulfilment’ in Jesus. Nevertheless, the central issue remains: what was the general direction of the fulfilment of prophecy in Matthew?

To go back to one of the links at the foot of your original post, one of the issues was the virgin birth, described unequivocally in Matthew as a conception of the Holy Spirit, for which there was no OT precedent, prophetic or otherwise. To say that this was no more than a way of emphasizing the birth of a rather extraordinary deliverer/king of Israel is, to quote Matthew from elsewhere, rather like straining a gnat and swallowing a camel. I think it lends some credence to what you seem to be describing as Samuel Adams’ apocalyptic reading: an entirely novel development which could not be explained according to any category of OT narrative history.

This is not to suggest that OT categories were now irrelevant, but that within the categories, something entirely new and unexplained had arisen. This would certainly sit well with the tenor of all the gospels, such as the bafflement over who Jesus was and what he did, not least in Matthew, and would provide an understanding of ‘Emmanuel’ according to the radically novel way in which Jesus was bringing about its fulfilment.

No, there is no Old Testament precedent for the conception by the Holy Spirit, but in itself there is no reason to think that conception by the Holy Spirit had to be understood as incarnation. Matthew does, however, give an Old Testament explanation: “All this took place to fulfill what the Lord had spoken by the prophet…”. He clearly thinks that the exceptional conception of Jesus must be accounted for according to the terms of Isaiah 7:14. We have no evidence from elsewhere in the Gospel that Matthew thought “God with us” meant that Jesus was God incarnate—no evidence that the Gospel points in any direction other than towards the fulfilment of a story about kingdom.

So the first assumption should be that Matthew understood the narrative sense of Isaiah 7 and saw in the miraculous conception of Jesus a sign that God was with his people at a time of crisis to judge and to deliver—that is what kingdom is all about. There is a perfectly good narrative-historical explanation, and nothing to support the developed theological argument other than tradition.

There needs to be an internal reason for interpreting “God with us” in a sense so wildly at odds with Isaiah’s understanding of the name. Isaiah did not believe that the child born in Ahaz’s reign was God incarnate. His birth, by virtue of its peculiar circumstances, was merely a sign. Matthew gives no reason for us to think that he invoked the name for an entirely different purpose. Give him credit!

The conception of Jesus, Trinity, and the search for an appropriate metaphysics: it’s nearly Christmas, after all
He will save his people from their sins
They will call his name Immanuel
Does Jesus reveal to us what it means to be perfectly human?