Juanita: Hi there Sam We spoke…
Andrew: David, many thanks for this…
David: And, for further reading, I…
David: There’s a substance to this…
Arthur Davis: That, I think, is the…
END_OF_DOCUMENT_TOKEN_TO_BE_REPLACED

Conversation with Mike Bird about In the Form of a God (0 comments)
Answering Mike Bird about the referent of "all things" in 1 Corinthians 8:6 (0 comments)
Interview: The Preexistence of Christ and Narrative Historical Theology (1 comment)
How we got from kingdom to Trinity: Constantine and pagan monotheism (2 comments)
END_OF_DOCUMENT_TOKEN_TO_BE_REPLACED

Who binds the strong man? And why? And when? And how?

The scribes claim that Jesus casts out demons by the prince of demons, and Jesus says that’s a stupid accusation to make because it would mean that Satan is fighting against himself. He then puts to them a little parable, the point of which presumably is that he is able to cast out evil spirits because the strong man has been bound:

But no one can enter a strong man’s (ischurou) house and plunder his goods, unless he first binds the strong man. Then indeed he may plunder his house. (Mk. 3:27; cf. Matt. 12:29)

Luke has a more elaborate version of the saying, perhaps with Roman power in view:

When a strong man, fully armed, guards his own palace, his goods are safe; but when one stronger than he attacks him and overcomes him, he takes away his armour in which he trusted and divides his spoil (skula). (Lk. 11:21–22)

The image appears to owe something to Isaiah 49:24-25, here the Greek version:

God will signal to the nations and they will bring his people back from their exile. Kings will be their foster fathers, queens their nursing mothers. They will bow down to the exiles and “lick the dust of your foot” (Is. 49:22-23). The mighty one, therefore, is Babylon or the king of Babylon, who will not be able to prevent the liberation of the captives.1 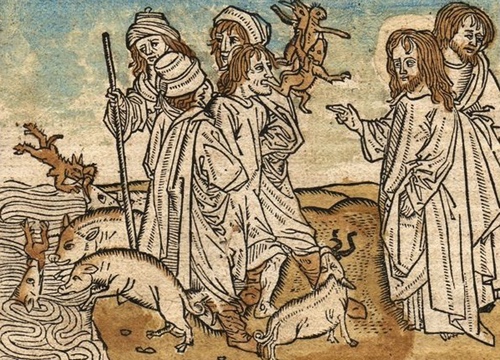 The preceding saying about casting out demons by the finger of God in Luke’s version (Lk. 11:20) reinforces the point. When Pharaoh’s magicians were unable to replicate the miraculous generation of gnats from the dust of the earth, they declared, “This is the finger of God” (Ex. 8:19). Jesus’ exorcisms anticipate an exodus event, a return from exile—a dramatic and impending liberation from captivity.

If Jesus had Isaiah’s narrative in mind (it seems very likely that Luke did, at least), then both the exorcisms and the struggle against Satan should be seen as defining a particular episode in Israel’s story. The exorcisms were tangible and profoundly humane signs that YHWH was about to liberate his people from the tyrant who oppressed them.

That tyrant was Satan, but Jewish and Jewish-Christian apocalyptic naturally associated Satan with Greece/Rome. The Testament of Levi, written in the Maccabean period, predicted that a “new priest” would be raised up by God, who would carry out judgment and be “extolled by the whole inhabited world” (18:2-3); he would bind Beliar—that is, Satan—and “grant to his children the authority to trample on wicked spirits” (18:12; cf. Lk. 10:19). The Qumran community believed that God had “made Belial for the pit” (1QM 13:10–11). Judgment on Rome would entail a final imprisonment of Satan in the abyss (Rev. 20:2-3).

Liberation from Satan was inseparable from deliverance “from the hand of our enemies” so that Israel might serve YHWH “without fear” (Lk. 1:71).

It has often been thought that Jesus effectively bound the strong man in the wilderness. But at the end of the period of testing, Satan merely “departed from him until an opportune time” (Lk. 4:13; cf. Matt. 4:11). The present reading may suggest that the exorcisms concretely represent or foreshadow the binding of Satan by God in the same figurative manner that God would take captive the king of Babylon. If Jesus attributes the exorcisms to the Holy Spirit or to the “finger of God” (Matt. 12:28; Lk. 11:20), he may be saying that God will bind Satan (cf. the role of the angel in Revelation 20:1-3) in order to liberate his people from a captivity analogous to that of Israel in Egypt or in Babylon.

In any case, it appears that Jesus’ exorcisms had a specific narrative-historical significance. They cannot be considered as instances of a universal Christian practice—not on the evidence of this passage, at least; and the assumption that Satan is still part of the equation may be questionable.

Maybe just a bit off topic, but in this age do you see Jesus ruling from heaven with the 12 disciples who are seated on 12 thrones? Or do you think the 12 disciples just ruled with Christ from heaven during the judgment on Israel since he said they would judge “the twelve tribes of Israel”?

Also, did the 24 elders (in Revelation) stop ruling when the 12 started?

Hope these questions don’t come across as too stupid.

I just read a few of your old posts and see that you believe the reference to the 12 thrones isn’t about heavenly rule but a symbolic reference to their vindication. That could be although it seems like “rule” might then be a strange word to use.

Conversation with Mike Bird about In the Form of a God NEW
Answering Mike Bird about the referent of "all things" in 1 Corinthians 8:6
Some hazardous thoughts on the Trinity for a new year and a new era
Why will Sodom and Gomorrah be present on the day of God’s judgment against Israel?
Who will recline at table with Abraham, Isaac and Jacob in the kingdom of heaven?

Conversation with Mike Bird about In the Form of a God
Answering Mike Bird about the referent of "all things" in 1 Corinthians 8:6
Interview: The Preexistence of Christ and Narrative Historical Theology
How we got from kingdom to Trinity: Constantine and pagan monotheism
Jesus and Paul, works and faith
Some hazardous thoughts on the Trinity for a new year and a new era
Was it Roman custom for people to return to their home town for a census?
A Hindu asks a very good question about the death of Jesus and the salvation of Gentiles
END_OF_DOCUMENT_TOKEN_TO_BE_REPLACED