Juanita: Hi there Sam We spoke…
Andrew: David, many thanks for this…
David: And, for further reading, I…
David: There’s a substance to this…
Arthur Davis: That, I think, is the…
END_OF_DOCUMENT_TOKEN_TO_BE_REPLACED

Conversation with Mike Bird about In the Form of a God (0 comments)
Answering Mike Bird about the referent of "all things" in 1 Corinthians 8:6 (0 comments)
Interview: The Preexistence of Christ and Narrative Historical Theology (1 comment)
How we got from kingdom to Trinity: Constantine and pagan monotheism (2 comments)
END_OF_DOCUMENT_TOKEN_TO_BE_REPLACED

What role do the “firstfruits” play in New Testament eschatology?

I was asked how I understood the reference to “firstfruits” in the New Testament. It’s a rather obscure topic perhaps, but a bit of word study won’t go amiss and may shed some light on the eschatological narrative.

In case you’re not familiar with my idiosyncratic way of reading the New Testament, my view is that the “eschatological” material has mostly to do with events in a foreseeable future: judgment against Israel, judgment against the nations, the vindication of the disciples and the churches, and the rule of Christ over the nations. This is not preterism; it is a matter of taking the historical perspective of the early church seriously. On the margins of the apocalyptic-prophetic vision of the New Testament, however, is a final judgment of humanity, defeat of evil and death, and renewal of heaven and earth.

So, to the “firstfruits”…

In the Old Testament the “firstfruits” are the first part of Israel’s produce. The Hebrew word reʾshit simply means “first” or “beginning” or “chief”. It mostly has reference to agricultural output, and mostly a cultic setting is assumed. At Sinai the people are told: “The best of the firstfruits of your ground you shall bring into the house of the LORD your God” (Ex. 23:19). Jacob, however, says of Reuben: “you are my firstborn, my might, and the firstfruits of my strength, preeminent in dignity and preeminent in power” (Gen. 49:3). Jeremiah applies the word metaphorically to Israel: “Israel was holy to the LORD, the firstfruits of his harvest” (Jer. 2:3).

The corresponding Greek word in the New Testament is aparchē. We are interested here in its use with reference to people in the eschatological narrative, but a few other instances may be noted: believers have received the “firstfruits of the Spirit” (Rom. 8:23); the patriarchs (I think) are the “dough offered as firstfruits” which makes the whole lump holy (Rom. 11:16); Epaenetus was “firstfruits of Asia for Christ”, as the household of Stephanas were “firstfruits of Achaia” (Rom. 16:5).

There are then four passages in which “firstfruits” is used in the context of a story that is being told about future events. One has reference to Jesus, the others to a larger group of believers.

Paul says that “Christ has been raised from the dead, the firstfruits of those who have fallen asleep” (1 Cor. 15:20). Christ is not the only one to be “made alive”. Others will follow in order: “Christ the firstfruits, then at his coming those who belong to Christ” (1 Cor. 15:23). As I read the passage (see The Coming of the Son of Man, 166-76), Paul expects the “coming” of Christ to happen soon (cf. 1 Cor. 16:22), followed by a period of time during which Christ will reign until the last enemy has been destroyed; then will come the “end”, when he will hand back the authority to rule to God the Father. 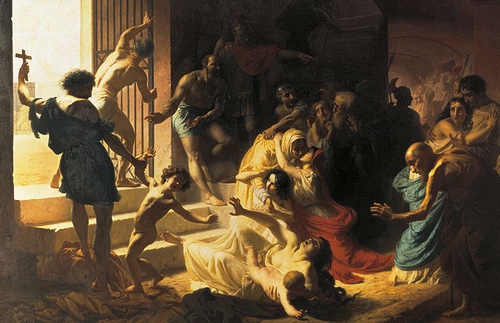 I suggest, therefore, that Paul is thinking here of resurrection as a matter of concern specifically for those who will suffer and die during the relatively short period of time leading up to the parousia—the moment when Christ will be welcomed and acclaimed as YHWH’s king by the nations. His assurance regarding those who have already “fallen asleep” (cf. 1 Thess. 4:15) or who may yet die before the parousiais that their resurrection is guaranteed by Christ’s resurrection. Having been raised from the dead, Christ is the “firstfruits” of the resurrection to come, when those who have died during this period of suffering will be raised to share in the vindication of the churches and in the life of the age to come. A final resurrection of all the dead probably is not in view in this passage because it comes after rather than before (1 Cor. 15:5) the reign of Christ (cf. Rev. 20).

Paul tells the church in Thessalonica that God has chosen them as “firstfruits to be saved” in the expectation that they will “obtain the glory of our Lord Jesus Christ” (2 Thess. 2:13-14). Here “firstfruits” may only mean that Paul expected many more to be saved and glorified in the same way. But the point to stress is that again he is thinking of a group of people who will share in or emulate Christ’s suffering and vindication.

There were already “imitators” of the apostles and of the Lord in that they “received the word in much affliction” (1 Thess. 1:6; cf. 2:14). They knew from the start that they were “destined” to suffer affliction (1 Thess. 3:3-4). They were anxious about those who had already died (1 Thess. 4:13-18). Wrath was coming on the world, but they were destined to “obtain salvation through our Lord Jesus Christ” (1 Thess. 5:1-11). Paul commends them for “your steadfastness and faith in all your persecutions and in the afflictions that you are enduring” (2 Thess. 1:4). Their suffering makes them worthy of participating in the coming kingdom (2 Thess. 1:5). The Lord will soon come to judge their persecutors and bring their afflictions to an end (2 Thess. 1:5-2:12).

A kind of firstfruits of his creatures (Jas. 1:18)

James urges his readers to rejoice in their sufferings because such testing produces steadfastness (Jas. 1:2-4). The man who remains steadfast when persecuted for his faith will “receive the crown of life”. Those who suffer in this way have been brought into existence or “given birth to” (apekuēsen) by the “word of truth”—presumably the gospel, but perhaps analogous to the creative word of God—in order to be “a kind of firstfruits of his creatures” (Jas. 1:18).

The thought may be not so much that these persecuted Jewish-Christians are the first of many who would suffer, which seems to be Paul’s sense in 2 Thessalonians 2:13, but that they are the means by which God is bringing a new creation or new world into existence. In any case, the metaphor belongs to the same basic storyline: “firstfruits” describes a community that must expect from the start to suffer for the sake of the foreseen eschatological transformation. James exhorts them to patience “until the coming of the Lord”, when their powerful and unjust enemies will be judged (Jas. 5:1-11).

Redeemed from mankind as firstfruits (Rev. 14:4)

In The Coming of the Son of Man I take the view that the 144,000 who are sealed in Revelation 7:1-8 are the “Jewish remnant in Judea, those who are appalled by Israel’s abominations, who are to be protected from the devastating effects of divine judgment against Jerusalem” (193). In contrast, the 144,000 seen on Mount Zion alongside the Lamb in 14:1-5 have been redeemed “from the earth” or “from mankind”. I take them to be those who are slain for not worshipping the beast of idolatrous Roman power (13:15). They have been redeemed “as firstfruits for God and the Lamb” (14:4).

The point of the metaphor is presumably that these martyrs from the nations of the Greek-Roman world have been set apart from the rest of humanity as sacrificial “firstfruits” for God. This is closer to James’ usage than to Paul’s in 2 Thessalonians 2:13. The larger group from which they have been taken may perhaps be the church, but I’m inclined to think, given the apocalyptic character of Revelation, that John has in mind the political-religious realignment of the nations, the conversion of the empire.

By virtue of their suffering these Gentile martyrs ensure the coming reign of God through Jesus over the world currently oppressed by Rome. Significantly, what John sees next are three angels proclaiming an “eternal gospel” of judgment against Babylon the great, followed by a call for the “endurance of the saints” and a declaration by the Spirit that those “who die in the Lord from now on” are blessed (Rev. 14:6-13).

In conclusion, in these eschatological contexts the “firstfruits” metaphor says something about the function or purpose of those who suffer and are vindicated or glorified. In his resurrection Christ is the firstfruits of those who will later be raised when he comes to establish his rule over the nations. As firstfruitsthe persecuted Thessalonian believers can expect to obtain the same glory that the resurrected Jesus has. James writes to believers facing great trials, who should see themselves as the firstfruitsof the new world to come. Finally, the 144,000 on Mount Zion are martyrs drawn from the nations, firstfruitsof the peoples of the empire, which will eventually serve the living God, “him who made heaven and earth, the sea and the springs of water” (Rev. 14:7).

I have made the point before that the New Testament does not give us a straightforward blueprint for a universal church. What we have rather is a story about communities of eschatological transformation, called to emulate Christ in his suffering in the hope of sharing in his resurrection, vindication and glory, for the sake of the coming rule of YHWH over the nations.

Andrew, you wrote, “This is not preterism; it is a matter of taking the historical perspective of the early church seriously.”

Don’t Preterists arrive at their position by believing scripture speaks of events in ancient history? It seems to me that Preterists (partial & full) do take the historical perspective(s) of the early church seriously.

Conversation with Mike Bird about In the Form of a God
Answering Mike Bird about the referent of "all things" in 1 Corinthians 8:6
Interview: The Preexistence of Christ and Narrative Historical Theology
How we got from kingdom to Trinity: Constantine and pagan monotheism
Jesus and Paul, works and faith
Some hazardous thoughts on the Trinity for a new year and a new era
Was it Roman custom for people to return to their home town for a census?
A Hindu asks a very good question about the death of Jesus and the salvation of Gentiles
END_OF_DOCUMENT_TOKEN_TO_BE_REPLACED