Keith Wansbrough: Looks good now, thanks. The…
Andrew: Thanks, Keith. It was…
Keith Wansbrough: The chart didn’t appear for…
Juanita: Hi there Sam We spoke…
Andrew: David, many thanks for this…
END_OF_DOCUMENT_TOKEN_TO_BE_REPLACED

Cleanthes’ “Hymn to Zeus” and the renewal of monotheism (3 comments)
Conversation with Mike Bird about In the Form of a God (0 comments)
Answering Mike Bird about the referent of "all things" in 1 Corinthians 8:6 (0 comments)
Interview: The Preexistence of Christ and Narrative Historical Theology (1 comment)
END_OF_DOCUMENT_TOKEN_TO_BE_REPLACED

I received a newsletter from a good missionary friend yesterday that spoke of his intention to “rescue lost people for Christ”. I have always felt uneasy about that sort of language. It sounds condescending and disparaging. Perhaps I’m just being squeamish, but I think I have some biblical warrant.

The word translated “lost” in the Gospels is the perfect participle of the verb apollumi. It is not the world that is “lost” but a section of Israel. The lost-and-found parables in Luke 15 are told to the Pharisees and scribes who are complaining, “This man receives sinners and eats with them.” The sheep, coin and son in the parables are lost in the obvious sense: they were part of something larger—a hundred sheep, ten coins, a household—but they have been mislaid and need to found again.

The father in the story of the two sons, of course, is not God but Abraham: the younger son was formerly part of the family of Abraham, he strayed like a lost sheep, had the humility to repent and return, and so, like Zacchaeus, was restored to Israel. What the scribes and Pharisees have to realise is that they risk being excluded from God’s future, while the “lost”, who were open to receive the grace of God, were being reconciled with father Abraham. 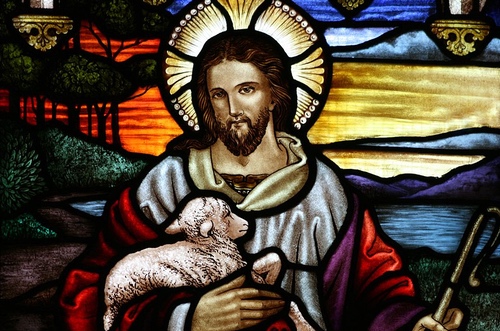 So if a person is “lost”, he or she must previously have been part of something. The idea that Jesus came to seek the lost belongs entirely to the narrative of first-century Israel facing judgment, undergoing renewal. It makes no sense to say that the Gentiles were “lost”.

There’s another side to this line of thought. God will “destroy” the wicked tenants (Matt. 21:41). The king sends his troops to destroy those who murdered his servants and burn their city (Matt. 22:7). If the Jews do not repent, they will “perish” in the same manner as those Galileans who were killed by Pilate or those residents of Jerusalem who were killed when the tower in Siloam fell—in other words, they will perish when Rome destroys Jerusalem (Lk. 13:1-5). The Jews will be taken by surprise by the attack and will be “destroyed” like the generation of Noah or the people of Sodom (Lk. 17:26-30). Caiaphas says that it is “better for you that one man should die for the people, not that the whole nation should perish” (Jn. 11:50). James speaks of God as the one Lawgiver and judge “who is able to save and to destroy” (James. 4:12).

In these passages the basic thought is that Israel is on a broad road leading to “destruction” (apōleia) unless the people repent, and Jesus’ aim is that his followers should be saved from this destruction. So the same word is used for those who are “lost” (the tax-collectors, prostitutes and sundry sinners) and those who will be “destroyed” in the coming judgment (the unrepentant leaders of Israel). But narratively speaking, these are quite distinct groups.

It’s harder to know what apollumi means when it is used outside the narrative of judgment on first-century Israel. For example, John says that “God so loved the world (kosmon) that he gave his only Son, that whoever believes in him should not perish but have eternal life” (Jn. 3:16). Paul says that Gentiles who have sinned without the Law will “perish” without the Law (Rom. 2:12). The word of the cross is folly to Gentiles who are “perishing” (1 Cor. 1:18). The apostles are the aroma of Christ among those who are “perishing”; their gospel is “veiled to those who are perishing” (2 Cor. 2:15; 4:3). Satan has deceived “those who are perishing, because they refused to love the truth and so be saved” (2 Thess. 2:10).

Just as the world “perished” in the flood, “the heavens and earth that now exist are stored up for fire, being kept until the day of judgment and destruction (apōleias) of the ungodly” (2 Pet. 3:7). But there is some delay because the Lord “is patient toward you, not wishing that any should perish, but that all should reach repentance” (2 Pet. 3:9). I suspect that by “you” Peter means Jews, but he appears to have imagined a wider conflagration than the destruction of Jerusalem though that may have been the epicentre.

Destruction in these passages is not just the natural death of the individual. The New Testament has in view some manner of eschatological scenario, analogous to the flood, by which the pagan world would be destroyed, overthrown, rendered obsolete, as a result of which unbelievers would perish. Paul tells the Colossian believers to put to death the sort of passions and desires that characterised the pagan world because on account of these “the wrath of God is coming” (Col. 3:5-6).

We can map the meaning of apollumi something like this: 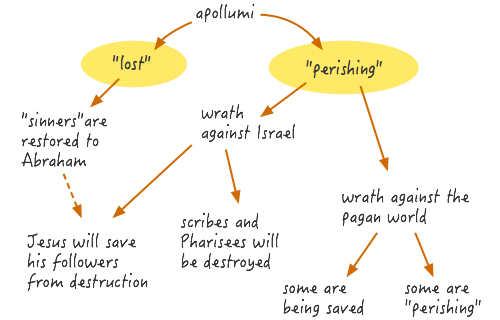 So I would vote for not saying today that non-Christians are “lost”, as a matter of theological definition—unless we really want to make the point that secular society has demanded its inheritance, packed its bags, and departed from the household Christendom.

To say that people are “perishing” may have more point to it, but I suggest that it still needs to be framed “eschatologically”, as part of a larger prophetic narrative about an obsolescent, moribund, self-destructive Western secular culture, perhaps.

Really good approach to the subject,Thank you,

I understand Jesus’ mission was to act as Yahweh’s greatest prophet so that God’s chosen might have one more chance to repent and be saved. But I don’t understand how Jesus’ death was a ransom.

The situation with Babylon seems quite similar to the first-century situation with Rome. God’s people sinned so God punished them through a foreign power. But in both cases he spared many Jews—and those spared were both righteous and unrighteous.

We are not told that Isaiah or Jeremiah died as ransoms, so why did Jesus need to die as a ransom? Was it simply so that he could be resurrected/exalted? If so, the ransom language seems out of place. Why not just say martyr?

I just don’t see how Jesus giving his life as a ransom achieved anything different for the people of Israel when compared to the earlier punishment by Babylon where there was no person giving their life as a ransom.

I came across an older post of yours (http://www.postost.net/2012/04/good-friday-approaches-it-ti…) and it explains how you think people have made too much of the word “ransom.” It does make more sense to see ransom as synonymous with “salvation/deliverance.”

Thanks for sharing your ideas!

I’ve been meaning to write a response to your comment. It may still happen, but thanks for following up.

Cleanthes’ “Hymn to Zeus” and the renewal of monotheism
Conversation with Mike Bird about In the Form of a God
Answering Mike Bird about the referent of "all things" in 1 Corinthians 8:6
Interview: The Preexistence of Christ and Narrative Historical Theology
How we got from kingdom to Trinity: Constantine and pagan monotheism
Jesus and Paul, works and faith
Some hazardous thoughts on the Trinity for a new year and a new era
Was it Roman custom for people to return to their home town for a census?
END_OF_DOCUMENT_TOKEN_TO_BE_REPLACED