toddh: Very interesting, that…
Andrew: Agreed. We may not be able…
davo: It is not clear that Adam…
Samuel Conner: Thank you, Andrew. I must…
Spring blossom : Luke 4:17 The scroll of the…
END_OF_DOCUMENT_TOKEN_TO_BE_REPLACED

Falling sideways: why not much changed when Adam and Eve sinned (3 comments)
How did Jesus’ disciples imagine that he would “redeem Israel”? (18 comments)
Why the outpouring of the Spirit on the day of Pentecost marked an end, not a beginning (3 comments)
Jamie Davies on the apocalyptic Paul: from interpretation to theology (2 comments)
END_OF_DOCUMENT_TOKEN_TO_BE_REPLACED

What makes us so sure that the harvest is plentiful?

Here’s another proof-text beloved of evangelists: “The harvest is plentiful, but the labourers are few; therefore pray earnestly to the Lord of the harvest to send out labourers into his harvest” (Matt. 9:37–38; cf. Lk. 10:2). It will no doubt get a good airing in the coming months as the Church of England prepares for a week of prayer for evangelism in May, leading up to Pentecost. It will seem obvious to many that Jesus’ saying is as relevant now as it ever was—he wouldn’t have said it otherwise. The harvest is waiting to be brought in. We just need to pray for more people to go out and share their faith.

But do we have any reason—exegetically speaking—for thinking that Jesus’ words hold true for the situation that we face in western Europe in the 21st century? Should the text be applied in such a simple fashion to our own context? 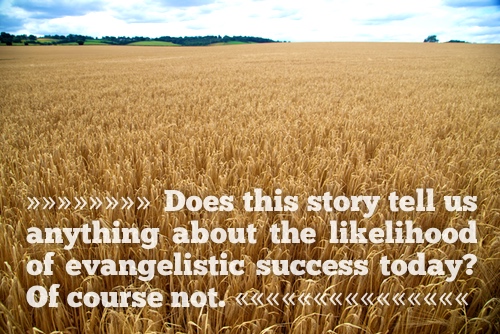 Jesus is speaking and ministering to Israel. Two blind men have just hailed him as the “Son of David” (Matt. 9:27). He is travelling around Galilee “teaching in the synagogues and proclaiming the gospel of the kingdom”. The “gospel of the kingdom” is not the offer of personal salvation through the death of Jesus on the cross. It is the public announcement that YHWH is about to intervene dramatically in the history of first century Israel to put things right.

One of the things that needed putting right was the fact that large numbers of ordinary Jews in Galilee and Judea were “troubled and cast out, like sheep without a shepherd” (Matt. 9:36). The motif crops up a few times in the Old Testament, but the most important allusion is to Ezekiel’s prophecy against the feckless shepherds of Israel: “they were scattered, because there was no shepherd, and they became food for all the wild beasts” (Ezek. 34:5; cf. Num. 27:17; 1 Kgs. 22:17). YHWH says that he will seek out and rescue his sheep and set in place over them “one shepherd, my servant David” (Ezek. 34:22-23).

The harvest was plentiful, therefore, because there were many Jews in Israel who had been let down by the established leadership and who could be expected to respond positively to the announcement that YHWH was now seeking them out—as a shepherd goes looking for the one sheep out of a hundred that is lost—and was about to install a new and good shepherd over them, a son of David. If this was indeed what YHWH was doing, then it made sense to pray that the Lord of the harvest would send out workers to bring the harvest in.

The disciples were then sent out with the same message: “The kingdom of heaven is at hand.” They were pointedly instructed not to go to the Gentiles and Samaritans but only to the “lost sheep of the house of Israel” (Matt. 10:6-7). No one was to be converted. Jews were simply given the opportunity to believe or disbelieve the message, with the grim warning that on the day of judgment it would be more bearable for the land of Sodom and Gomorrah than for the town that rejected Jesus’ messengers (Matt. 10:15).

Does this story tell us anything about the likelihood of evangelistic success today? Of course not. It is part of a larger story about the traumatic renewal of God’s people in the first century, which is part of the larger story still of biblical Israel.

Our story is different—a lot of water has passed under the bridge since then; and I think it would be foolish, if not irresponsible, to suggest that we can take this missional formula and expect it to work under very different conditions.

Stated very well!  Right on target.  Don’t think I could agree more with your assessment of the passage.

Here’s another proof-text beloved of evangelists

Actually, I would say it’s another proof-text by evangelicals as a whole; of course that’s my opinion.

I keep wondering whether Jesus said these words because it was harvest time, and whether the 72 he sent out worked with their hosts in the fields during the day and shared the gospel over the evening meal. That would shed some light on the word about the laborer and the reward.

OK, if this is contextually correct, then what is the Churches job today? I can hear a lot of the Church in the West wipe their hands and reply ” whew, that is good news, I don’t have a responsibiblity to go out and share with people or give money to send others. I am release of this obligation.”

Are there not thousands of Unreached Peoples still today that have not once heard the Gospel, have the Word of God or have a Jesus follower in their midst that could share the Good News? As I look and understand Lk. 10 it is a manual of sorts of what we are to be doing today. As we go out, share the truth of Jesus and they come to Jesus, then they become the new harvesters in the field. Your comments do not encourage me one bit. Please help me understand what you are saying.

Getting the passage “contextually correct” as part of the story that is being told about the people of God in the first century is not unimportant. It’s not just an academic exercise. My argument overall is that in the long run the mission of the church will benefit from us reading the Bible with exegetical integrity and getting the historical narrative right.

The implication would not be that there is no point in evangelising. It is rather that we should be wary of those who predict large numbers of conversions, an abundant harvest, an outbreak of “revival”, on the strength of these words of Jesus.

The scope of the argument is the secular, post-Christian West, for which Christianity has become quite literally a “thing of the past”. It doesn’t necessarily apply to unreached people groups outside the western world.

Personally, I don’t think sharing the truth about Jesus, etc., is a fully adequate statement of the mission of the people of God. If we take into account the whole biblical narrative, the mission of the church is to be a priestly-prophetic people serving the interests of the one true living God in all regards, in the midst of the nations and cultures of the world, as his new creation. But we can do this only because of Jesus and only under the lordship of Jesus.

Mission, I suggest, is driven by the realisation and proclamation of who God is, what he has done, what he is doing, and what he will do—ie. kingdom. If people are going to come to terms with that, they have to reckon seriously with Jesus because God has put Jesus in control of things, so to speak. But that is not the whole story. It is part of the larger and prior function of our corporate serving of the one God.

Even in the context of the Gospels, following Jesus was not a numbers game, and it was not an end in itself. People were responding, whether in large numbers or not, to the announcement that YHWH was about to “judge” his people—to bring down the mighty from their thrones and exalt those of humble estate, as Mary puts it (Lk. 1:51-52).

Falling sideways: why not much changed when Adam and Eve sinned
Why did Jesus instruct his disciples not to preach the kingdom of God to Gentiles and Samaritans?
Why Romans 8 should not make you a Calvinist
Why will Sodom and Gomorrah be present on the day of God’s judgment against Israel?
Jesus as Alpha and Omega, first and last, beginning and end