Peter Leithart on the “Christendom model” of church-state relations 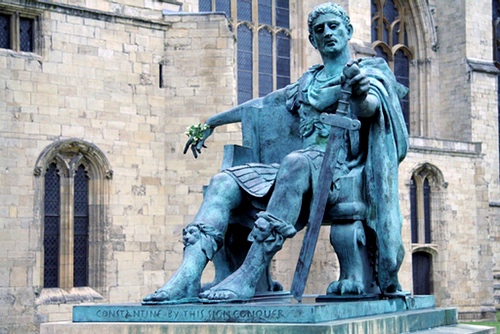 Peter Leithart has written an excellent, concise, balanced account of the “Christendom model”, its relation to scripture, and its strengths and weaknesses, in a post simply entitled “For and Against Christendom”. I won’t bother summarising it—I hope people will read it. But there are three observations that I will make.

First, Leithart is a rare theologian who recognises the positive connection between Christendom as a historical reality and the biblical narrative:

Christendom is inherent in the gospel. Yahweh promised Abraham that kings would come from him. Psalm 2 proclaims that the Lord has set His anointed at His right hand to rule the nations, and the New Testament explicitly applies this Psalm to Jesus…. Paul preaches the gospel of the son of David in order to bring about the “obedience of faith” among the Gentiles…

That is exactly what I have been saying all along: “Christendom is inherent in the gospel.” Perfect!

Secondly, Leithart says that Christendom acknowledges the church as the body of Christ. I would hesitate to use “body” language in this context. I think it belongs to the period of eschatological transition rather than to the settled circumstances of Christendom. As a body the church is either a mutually supportive, etc., community of the Spirit (1 Cor. 12:12-27; Rom. 12:4-8) or it is that community which will depend on Christ’s preeminence as it too faces suffering and death (Eph. 1:22-23; Col. 1:18). It is not the church as a “religious society” in a strained relationship with the state, for which “prophetic priesthood”, or some such, seems more appropriate.

Thirdly, Leithart seems to think that Christendom will always be with us in some form: “The history of Christian politics has been and will always be a messy history.” At least, there is no “post-Christendom” part to his argument.

I agree that “the church is the present outpost of the eschatolog[ical] city of God, an independent polity”. But Christendom entailed an active partnership between church and state, a mutually beneficial contract between church and society, and that arrangement seems to me to be a thing of the past. If “Christendom fulfills the gospel as the response of the nations to the authority of Jesus” (Leithart cites Oliver O’Donovan), I think we also have to accept that it has become a temporally limited expression of the eschatological expectation.

We are now beyond the fulfilment of the political-religious dimension of biblical eschatology, we have moved beyond the kingdom of Christ as a concrete historical phenomenon. As a priesthood or chaplaincy the church in the secular West no longer has political or cultural endorsement. Whether we can win back trust on other terms, remains to be seen.

Glad to see you enjoying Leithart. However, Im going to keep asking..

In what ways would you say that the current state of the world is “rebellious”? And feel free to pick from any location: San Francisco (local) to Africa (National) Australia etc, your pick. What “sins” are in need of turning from? And what would be the “god” of this age that if not worshipped will lead to persecution for Christians?

I confess to being baffled by words like polity.

Christendom to me is a failed power. The failure is measured by wars, persecutions, violence, with the seal of the failure in the shoa. The churches I have been a part of all my life have also failed in many aspects. This is measured by the sexual impropriety that is pervasive in the institution and many of its officers. The church did not handle the word of truth effectively and its hands are burned.

Where then do I turn? I still attend churches. I still see the music, the care, the love expressed. I respect their leaders as having an insurmountably difficult job but I wish they would share it more effectively. Alas they fear the ignorance of those they serve. And I don’t blame them - we are an ungovernable lot. Personally I think the whole social structure is where we need the prophetic voice. The body of Christ is bigger than any institution called church. Church, it seems to me must embrace all the created order.

I share your experiences as well. Almost exactly. That said, I spent 25 years as a pagan. Deep in the “world”. Ill take any bad day in the church over all the days I had as a pagan under their worldview. Although I wanted to give up many times, over 15 churches, me and my family now have a fantastic church, classical christian school, community full of Christian businesses and ministries and city where Christ is truly reigning. Ironically, its a city Peter Leithart had a huge hand in helping shape as pastor and teacher. Its taken almost 25 years. Just wanted to share.

“In this sense Christendom is inherent in the gospel” introduces the paragraph you quote, but also links with the preceding paragraph: “Christendom involves the effort to conform public life to the gospel and the word of God” . To illustrate this, Leithart cites the coronation rites. Oddly for an American. English monarchs do not immediately spring to mind as promoters of the gospel or the example of Christ, except, perhaps our current monarch.

I think tensions arise over our understanding of what exactly is meant by the kingdom of God, and how Jesus exercises his rule as king. Leithart’s and your thinking stand in contrast to a view that Jesus changed the notion of kingship entirely, and also the way in which power to rule is effected.

If Jesus is regarded as changing our understanding of how power is effected, in this model the kingdom of God is a mustard seed, spreading from the margins to change societies and cultures. It is salt spread to season an entire meal. It is therefore a subversive agent of power. Politics itself has been changed by this model, but is not its primary instrument. (Think of all the godly reforms which politics initially opposed, but then conceded by the efforts of the ‘powerless’).

Civic society has been shaped, and continues to be shaped today, by the model of the kingdom of God working from the margins of power - although arguably movements for liberal and humanitarian reform today have broken loose from their Christian moorings, and are even opposed by the church which was the primary agent of change through the gospel and the imitation of Christ. One thinks of equal rights for certain minorities as an example.

Kings did indeed come from Abraham, but Jesus the king confounded notions of kingship in ancient history and in their equivalents today. Psalm 2 describes the inauguration of ancient kings of Israel, and a future messiah king. The language of ancient monarchy translates uncomfortably into how Jesus exercised, and exercises power. One could think of different ways in which the call to the “obedience of faith” amongst the gentiles by the son of David is exercised, even over whole nations, than the purely political, top down model.

This is all part of an argument about point of view. I think the ‘kingdom’ understanding as power coming from the margins is an effective paradigm for today’s church as well as providing a consistent paradigm for church history - even the Christendom period.

Jesus changed the rules for kingship over the people of God and for leadership in the people of God. He also became “King of kings and Lord of lords” through suffering and death. I’m not sure it’s right to think that “Christendom” as a concrete expression of the nations belief in the God of Israel, etc., expected Jesus-like kingship from its rulers. I can’t think of any argument in scripture to that effect.

Christendom was not the kingdom of God. It is what happened when empires and nations confessed that Jesus Christ is Lord to the glory of God the Father. The church was a priestly-prophetic body within that political-religious arrangement, subject to Christ as Lord, its role to hold political power accountable to its confession. But empires were still empires and nations were still nations, and no one’s claiming that it worked perfectly.

The church is now at the margins and the nature of its influence has changed. It looks to me as though you are confusing the modern situation with historic Christendom, under which monarchs were certainly regarded as defenders of the faith.

Just saying that there was continuity between Jesus’ teaching, practice and example and whatever followed. The only model for his kingly rule is the gospels, and has proved effective throughout history in both the public and private sphere.

The title “defender of the faith” was given by the Pope to Henry VIII, perhaps the most egregious violator of the coronation oath to be an imitator of Christ, and who then proceeded to attack the faith (Roman Catholicism) of which he had been commended as defender!

Following Henry, English monarchs were mainly preoccupied with “defending” the (Church of England) faith against Roman Catholics and dissenters. The detail of history calls into question the meaning and practice of monarchs as “defenders of the faith”. On the other hand, Jesus’ definition of kingdom of God, and his example of servant kingship provides a good paradigm for interpreting history in both the “Christendom” and modern period - so no confusion.

Post-Christendom and the global church
The mission of the church after Christendom
The Gospel after Christendom: New Voices, New Cultures, New Expressions
Peter Leithart's review of The Future of the People of God